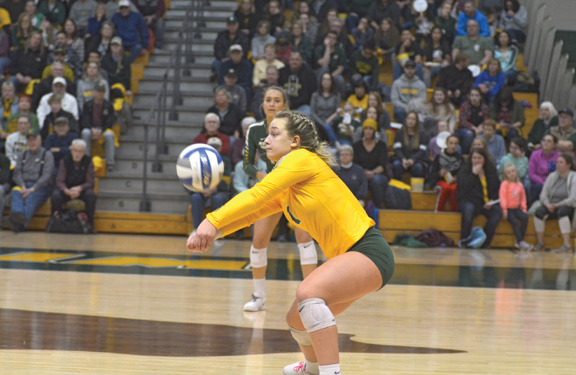 MARQUETTE — Defeating a rival is always a great feeling.

Defeating a rival six times in a row is an even greater feeling.

That was the case for the Michigan Tech volleyball team, which escaped a packed and hostile Vandament Arena with its sixth consecutive victory over Northern Michigan University on Saturday afternoon.

The Huskies topped the Wildcats 3-0 behind 11 kills apiece from Olivia Ghormley and MacAulay Petersen, continuing their winning streak over NMU that dates back to Nov. 4, 2017.

MTU head coach Matt Jennings said it’s always a satisfying feeling to come out victorious on the road, especially against a Wildcats team that makes it a battle every single time.

“It always feels good when that happens,” he said. “It doesn’t matter where the two teams are at in the season, it’s always a battle. (Northern) is a good team that can beat somebody, so to come out of here with a 3-0 win is a good thing.

“We’re playing pretty good ball right now and we’re looking to get better every week. I think in this one here, we were focused on trying to play our kind of game and I think that’s where Northern really challenged us (today). We’re playing pretty well and to play well against Northern means something to us, too. That’s a very storied program and we’re happy with the way we’re playing.”

The Wildcats had a two-match win streak snapped and now sit in sixth place in the GLIAC standings with a 6-6 conference mark and 10-13 overall.

NMU head coach Mike Lozier credited the Huskies for slowing his team down in key situations, adding that Tech is nationally ranked and a top regional team for good reason.

“I thought we fought hard,” he said. “Michigan Tech is probably No. 1 or No. 2 in the (Midwest) region. We fought with them and we had an opportunity in the first set to win. We had two set points and unfortunately, Tech is really good and they were able to slow us down in those moments.

“In the second and third sets, they just had one key run in each set that put us behind and we weren’t able to recover. Because they’re so good, they limit how many errors they produce, and that puts a lot of pressure on us.”

Lozier added that there are several positives to take from Saturday’s contest into the final four matches of the regular season.

“We played better than we did the last time we played them,” he said. “The team in general has improved, and we’re seeing that both statistically and how we look on the court.

“Moving forward, nothing changes. We’ve got to take care of business against Northwood on Friday and Ferris on Saturday in our last two home matches so we can try to position ourselves in the GLIAC Tournament.”

The lead was never greater than three points for either team in the opening set Saturday, with the Wildcats going up 22-20 late in the set on a kill from Lauren Van Remortel. After the Huskies tied it 22-22, NMU got another kill from Abigail Durecki and moved to its first set point on a Huskies’ service error. Tech managed to stay alive and rally, taking the final two points to claim the set.

Hailey Wickstrom led the Wildcats offensively with 12 kills while Sarah Kuehn finished with seven. Durecki added six while Van Remortel had four with 29 assists. Alli Yacko had one ace for NMU.