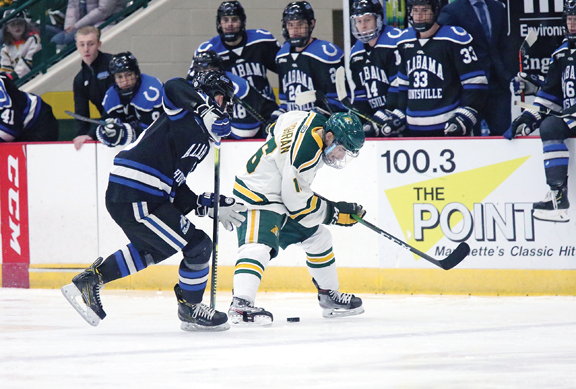 Northern Michigan University’s Griffin Loughran, right, passes the puck between his feet as he moves into the offensive zone with Alabama-Huntsville’s Drew Lennon defending in the first period of their WCHA hockey game played Saturday at the Berry Events Center in Marquette. (Photo courtesy Daryl T. Jarvinen)

MARQUETTE — After simply finding a way to win Friday night, the No. 20 Northern Michigan University hockey team wanted to take a more methodical approach to its attack Saturday as the Wildcats tried for the sweep against Alabama-Huntsville.

That approach worked as NMU defeated the Chargers 4-2 and picked up its sixth win of the year. The Wildcats remain undefeated in the WCHA at 4-0 and haven’t lost since their season opener. Northern goalie Nolan Kent finished with 25 saves to get his third career win.

“I thought that was one of the best games we’ve played in awhile,” Northern head coach Grant Potulny said. “It was a weird game. You had to kill a five(-minute power play), you’re down a player.

“A couple areas that we talked about being better in, one especially was puck management and our defensive zone. I thought we did a really good job on both of those. To be honest, it’s probably, to me, one of the better games we’ve played all year.”

Wildcats captain Phil Beaulieu agreed with his coach’s assessment and said the team tends to play better the second game after seeing their opponent live.

“I think Saturdays this year have really been more dialed in for us,” Beaulieu said. “It seems like we need to get used to playing a team and then we watch video the next day and we know how to play them.

“What (Potulny) means by ‘methodical’ is just being mentally ready to go and just being solid on your plays and being ready to go. That’s kind of been a team motto this year, to be methodically ready to go. Just think the game, play the right way and Saturdays seem to be when we really turn it up and dial in.”

Unlike Friday night, when Huntsville scored less than 20 seconds into the game, it took a few minutes for both teams to find their legs. NMU started going about five minutes in as Griffin Loughran had two shorthanded scoring opportunities, but was denied both times by UAH goalie Mark Sinclair. Over the next two minutes, Vincent de Mey and Beaulieu also had good opportunities, but Sinclair stopped both shots.

At 11:41, the Wildcats broke through. After Garrett Klee drew a Chargers’ slashing call on an offensive rush, Northern defenseman Hank Sorensen sent a pass over to de Mey, who one-timed the puck top shelf.

“We always want to score first,” Beaulieu said. “That’s one of the things we check off on our game list. Make sure we score first and that usually results in a win for us.

“It’s just kind of interesting this year because we’ve given up quite a few goals first, but we battle back and that goes back to the resiliency thing that we talked about the other day.”

With about six minutes left in the period, Huntsville started to generate offense. After Kent made back-to-back saves on the Chargers’ Connor James, UAH cashed in on its next chance.

Huntsville’s Liam Izyk passed the puck over to Austin Beaulieu at the right circle, who then sent a cross-ice feed to Christian Rajic. The junior forward then snapped a shot past Kent’s glove to tie it 1-1 at 15:20.

NMU had a decent chance to take the lead seconds before the horn as Phil Beaulieu sent a long pass up to Darien Craighead, but Sinclair made a nice save at the near post.

“You can tell when the guys are dialed in,” Potulny said. “If you look at whatever the history of the last three years, when we score first, we’re a really tough team to beat. It just gets you in the game and gets you going. Even though they tied it, it’s just one of those games where it just felt like if we continued the way we were doing and the way we were playing, we’d be fine.”

NMU again took the lead early in the second as Caleb Schroer made a nifty move around a Huntsville defenseman and beat Sinclair blocker-side. Three minutes later, Phil Beaulieu almost padded the advantage to two, but his shot rolled just wide of the far post.

Then a major penalty cost the Wildcats their lead as Jarrett Lee was whistled for checking from behind and was also handed a game misconduct. Just 10 seconds into their long five-minute power play, the Chargers tied it 2-2 as Tyr Thompson got a pass from Josh Latta and found a wide-open net. Huntsville had a couple more chances soon after that to grab the lead, but Kent made back-to-back saves on Latta and NMU killed off the remainder of Lee’s penalty.

Northern got back ahead with 6:45 remaining in the second on a good play by Phil Beaulieu. The senior captain skated with the puck behind the Huntsville net and then sent a pass into the slot to Andre Ghantous, who then beat Sinclair five-hole to put the Wildcats up 3-2.

With about four minutes left and NMU on the power play, the Wildcats almost took a two-goal advantage, but Sinclair just got his skate on Craighead’s shot to keep the Chargers’ deficit at one.

The third period was fairly quiet as neither team generated any scoring chances early. Huntsville got its first chance on an offensive rush as Austin Beaulieu got a good look at the net, but his shot sailed over the cross bar with 14:50 remaining. The Chargers got another opportunity with 11:50 left as Daneel Lategan broke free on a partial breakaway, but he was stopped by Kent. That was basically it for both teams until Loughran clinched the victory with an empty net tally with a minute left.

Northern hosts St. Cloud State this weekend in a nonconference series at the Berry Events Center. Potulny said his team remembers how the Huskies easily handled the Wildcats last year in Minnesota and said that they’re more aware of what will be coming this time around.

“I thought we were wide-eyed last year when we played them,” he said. “This year, I feel like we have experience against them and probably have a better appreciation for what kind of game we’re in store for. I know that we’ll have their attention all week.

“For us, it’s a great opportunity and a great challenge. To have them in our rink and in front of our fans, is something that as an athlete, you’re excited for. As a program right now, it’s a really big series for us.

“You can’t win the league early in the year, but you can lose it. We’ve taken care of business so far and to keep banking points is so important, especially with the way the playoff format sets up. Home ice is paramount and it’s king and the more we get now, the better off we’ll be later.”