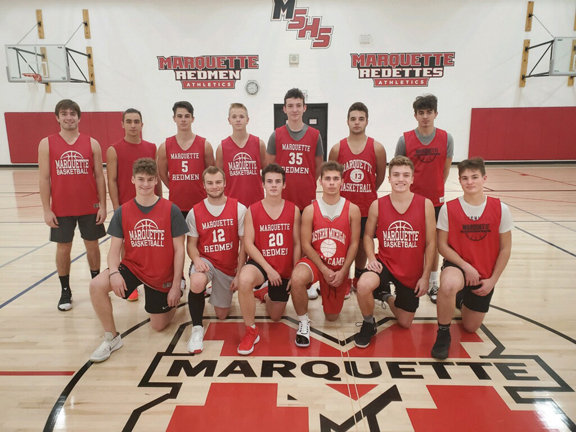 “We’re younger and we don’t have as much experience, but we do have basketball players who are tough, smart and athletic.” — Brad Nelson, head coach, Marquette boys basketball

MARQUETTE — The Marquette Senior High School varsity boys basketball team may have lost a lot of talent from last season, but the Redmen also return players who are more than capable of filling the void.

Last season’s Upper Peninsula Sportswriters and Sportscasters Association Division 1-2 Team of the Year had five players receive All-U.P. recognition, including one on the Dream Team, one on the Division 1-3 Second Team and three receiving either special or honorable mention.

The Redmen also have won the previous three Great Northern Conference titles, and had seven players earn All-GNC honors, including two on the First Team, one on the Second Team and another being named Defensive Player of the Year. Four of those players also received special or honorable mention.

Out of all of that recognition, only one of those players returns from last year’s Redmen squad that went 19-4.

Head coach Brad Nelson said despite having a younger group, he’s confident in the players he has this season.

“We have a tough group of kids this year,” he said. “We had to make a few cuts, but we feel like we’ve got the kids that we want in our program. Not only at our level, but the freshman and junior varsity levels as well.

“We’re younger and don’t have as much experience, but we do have basketball players who are tough, smart and athletic. We’re looking forward to getting started.”

Seniors lost to graduation were Raffy Millado, Liam Darr, Bryce Brazeau, Ethan Martysz, Brendan Kaski, Garrett Zueger and Marius Grazulis. Of those seven, Grazulis is arguably the biggest loss for the Redmen, both figuratively and literally.

Standing at 6-foot-10, the Redmen’s primary inside man averaged 18.7 points per game as the All-U.P. Dream Teamer and is now playing for Grand Valley State.

Asked how to replace a player like Grazulis, Nelson simply said you can’t, and that it’s more about changing things up defensively.

“You don’t replace him, you’ve just got to adapt,” the coach said. “We were able to play a little more loose on the perimeter defensively when you had somebody like (Grazulis) to protect the rim. You could be more aggressive and take more gambles.

“This year, we’ll have to tighten up defensively, especially on the perimeter. That’s one of the No. 1 things I addressed to start the season. Perimeter defense, pressure and rebounding. If I had two priorities right now, they would be rebounding and defensive awareness of what’s going on around us.

“These kids are coachable and willing to learn, and as long as I do my job, we’ll be ready to go.”

Wyble was the GNC Defensive Player of the Year and was an All-U.P. honorable mention, which means Nelson will look to him as other seniors for quality minutes.

“Drew started nearly every game last year,” Nelson said. “He was a defensive standout and hopefully he’ll be able to score some more points as well. Collin Hicks is a good shooter and so is Robert Apple. Isaac Johnson returns from an injury last year, too. Those are the seniors we have, so we’ll be looking to them for leadership.”

Five players join the varsity program from last season’s JV, as well as two sophomores up from the freshmen squad.

The five players fresh off the JV squad are Connor Johnson, Kameron Karp, Lincoln Sager, Truman Langlois and Ty Lotterman, while the sophomores consist of David Eberhard and Justin Jurmu.

“Kameron Karp is a phenomenal player and we expect great things from him,” Nelson said. “Lotterman is one of the most explosive players I’ve seen. He’s strong around the basket and has pretty good post presence. Lincoln Sager is an outstanding shooter. Connor and Truman, those guys are going to get some minutes as well, and they both have a lot of talent.

“We have a good mix of kids between seniors, juniors and sophomores. We’re putting the pieces together to get ready for Dec. 13.”

Marquette begins play on that day facing Brighton at the annual Petoskey Invitational. Brighton handed the Redmen one of their four losses last season, 63-58 in overtime. That game begins the team’s usual challenging nonconference and GNC regular-season slate.

Outside of GNC foes Escanaba, Kingsford, Menominee and Gladstone, MSHS will also see six downstate opponents and four U.P. nonconference opponents, including Negaunee twice, Ishpeming, Houghton and Westwood. After visiting Green Bay, Wisconsin, Preble for a game last season, the Redmen will host another team from that area this year, this time facing Green Bay East in February.

As far as the conference goes, Nelson said winning the GNC is something his team takes pride in, and it’ll be a challenge as always.

“Esky is going to be long, athletic and a strong and talented contender,” he said. “Menominee was young last year and they’ve got some good players coming back. I think they can come back and put their hand in the mix of the GNC. Kingsford is in rebuild mode based on the last conversation I had with Coach (Dan) Olkkonen, Gladstone will have to replace Reece Castor like we did with Marius.

“We know all of these teams well, and they all bring talent and numbers every single time. We’re looking forward to it. We take pride in winning that conference, and it’s something we’re looking to do again. We’ll have a steep learning curve, though, and it’s a work in progress.

“Being Marquette, being the biggest school in the U.P., we’re going to get everybody’s best game. We’ve got to get ready for all of them no matter who it is and we’ll let the chips fall where they may.”

Asked how his team improves on such a successful season, Nelson finished by saying it’s impossible to look at success from that perspective. Rather, it’s about how you improve every day.

“We had three successful years in a row with the seniors who left after last year,” he said. “In high school basketball, it’s hard to look year-to-year and try to improve your record. Three years ago we went 19-1. You’re not going to get much improvement with that, so it’s more about improvement through the season, the growth of players and the growth of the team.

“We’ve got to be ready for March. You can go 10-10 and win a district, or you can go 19-1 and lose a district like us a few years ago. You can’t look year-to-year, especially this year.

“It’s a different dynamic compared to last year. We need improvement on a daily basis and game-to-game basis. We need to be ready to go when the tournament starts.”