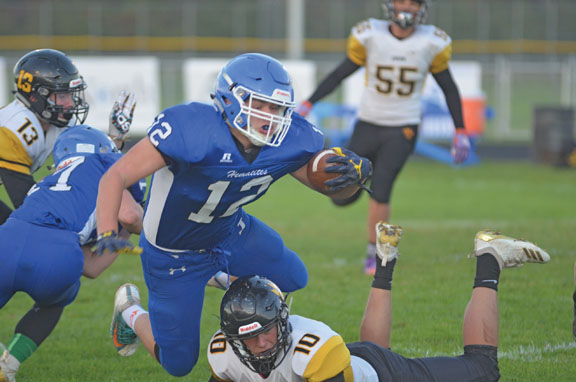 Ishpeming’s Otto Swanson runs down over Gwinn defender Caleb Anderson during the Hematites’ homecoming game on Oct. 4 at the Ishpeming Playgrounds. (Journal photo by Trinity Carey)

Another dry spell came to an end Thursday at the Upper Peninsula Sportswriters and Sportscasters Association’s annual meeting as the Redmen earned Class A-B Team of the Year for the first time since 1976. Marquette head coach Eric Mason said he had a feeling this team had the potential to have success.

“I knew the kids because I had them in ninth grade and they were a darn good team in ninth grade,” he said. “We had a few more kids that were on it and one that had moved away was Joe Ostrowsky. So he was our quarterback back then and that team was very good.

“So I knew these kids would be good, but some of the kids had either not come out and we had some injuries going into the year where there were kids that couldn’t play. And then Joe moving away, we were down a significant amount of kids. But the current kids that we did had, I knew that they had it in them.”

While it’s been years since Marquette earned that type of award, Ishpeming won its second straight Class D-Division 8 Team of the Year award with a unanimous vote.

Hematites head coach George Niemi said lots of people didn’t expect his team to be where it is right now as West PAC Iron Division champions and hosting a first-round playoff game, and said it means a lot that they earned it.

“We got it figured out and now we’re just refining it and getting better. I couldn’t be happier for this group of kids and this group of coaches and that’s incredible that we got that honor.”

Iron Mountain was the unanimous winner of the Class C Team of the Year award after finishing the regular season undefeated at 9-0.