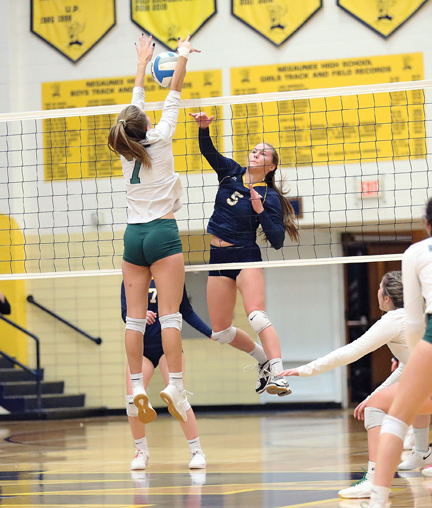 NEGAUNEE — Communication is key for a volleyball team to be successful in the postseason, or just in general, and the Manistique Emeralds used that to their advantage Monday night.

Manistique took the first two sets fairly easily, but dropped a close third one to Negaunee. Then the Emeralds talked more with each other in the fourth and bounced back to win that final set and eliminate the Miners in the district quarterfinals. Set scores were 25-16, 25-15, 23-25, 25-16.

On the defensive side, Smith and Zellar combined for 36 digs and Kayla Muth set a school record with four blocks.

“The first two sets, I thought our team chemistry was great,” Manistique head coach Amy Nixon said. “We were communicating well, moving well and attacking and keeping our offense going.

“Set 3, we kind of hit a little rough patch. Communicating, I think, was kind of a little bit of a breakdown, which led to some errors. But I was really proud that they kept mentally tough and then answered back in the fourth set.

“Even toward the end of the third, we were making a comeback. But we answered back in the fourth to put it away.”

In the first set, the Emeralds took a 7-3 lead, but Negaunee rallied to tie it 7-7 with the help of a block by Tollefson and kill by Madison Downey.

However, an ace from Smith and block by Zellar pushed the Emeralds lead up to 12-7. After the Miners pulled within 18-15 on a tip by Alexa Gravedoni, the Emeralds went on a quick surge to close out the set for a 25-16 win, highlighted by a kill from Smith.

“We have a lot of different offensive plays and several hitters that we can get the ball to,” Nixon said. “I think we can keep the other team kind of off balance when they don’t know where we’re going next.

“Some teams, you know they’re going to try to go to the same girl every time, but we have several of those girls on our team, which is nice.”

Manistique looked even sharper in the second set. Two aces from Chartier put the Emeralds up 6-2 and an ace from Zellar put them up 12-4. Back-to-back aces from Smith gave Manistique a 14-point advantage and the Emeralds were on the verge of winning the set before Negaunee rallied.

A kill and tip from Norman along with a tip from Allison Ennett cut the Miners’ deficit to nine, but a block from Muth handed Manistique the second set 25-15.

In need of a win in the third set to stay alive, Negaunee got it. With Norman serving, the Miners notched four straight points, including a kill from Tollefson, to take a 16-8 lead. But the Emeralds rallied, clawing within one of Negaunee three times on an ace from Zellar, a point from McDaniel and a kill from Smith. The Miners did eventually win the set though 25-23.

After letting the sweep slip away, the Emeralds took care of business in the fourth set. Two blocks from McDaniel put Manistique up 12-7 and an ace from LaBar extended the Emeralds’ advantage to 16-9. A kill from McDaniel pushed Manistique’s lead up to double digits at 23-13 and a kill from Chartier closed out the set at 25-16 and the match.

Manistique hosts Ishpeming Wednesday in the district semifinals and Nixon is feeling confident about her team’s chances.

“I feel really good about tonight and Wednesday night, we’ll be at home, which is always a bonus,” she said. “We’ll play Ishpeming, who we’ve played about three times this year, so I think we know what to expect. So I think we feel confident knowing what to expect against them.”

Negaunee coach Sarah MacDonald couldn’t be reached after the match.