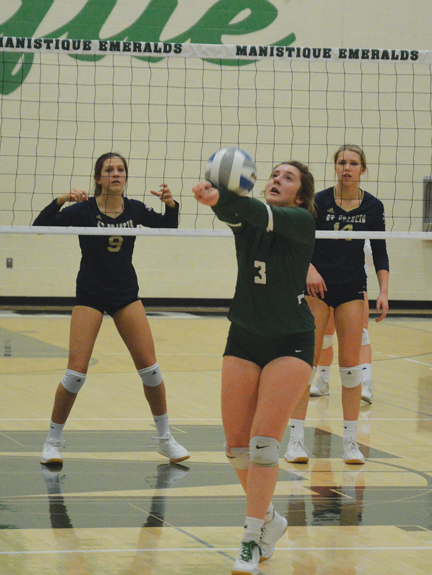 MANISTIQUE — For a little more than one set, it looked as if Manistique might be headed toward its first-ever regional title. Then, Traverse City St. Francis called timeout, regrouped and took over as the aggressor.

The Gladiators (33-17) rallied back to win the second set, pulled away late in the third and hung on to win the fourth to take their second straight MHSAA Division 3 regional volleyball title over Manistique with an 18-25, 25-18, 25-17, 25-21 victory at the Emeralds’ gym Thursday night.

The Emeralds — coming off a thrilling come-from-behind five-set win over Calumet in the regional semis on Tuesday — started out on fire in the first set, building a 20-9 lead after a six-point service run by Brooke Richey. After closing it out with relative ease, they built an 8-3 lead in the second set to force the Gladiators into a timeout.

Out of that timeout, everything changed.

Trailing 9-5, St. Francis’ Alena Kavanaugh went on a six-point run that was finished with a powerful kill by Kaylin Poole. Poole then went on a three-point service run to boost the Gladiators’ lead to 14-10, and later in the set Maddie Connolly went on a four-point run to make it 22-15 and help close out the set.

“I think that we were just a little nervous, and it took us a minute to get our feet on the ground and realize that we just needed to play our game,” Nance said. “We were just trying to rock back on our heels and letting them take over. (After the timeout), we made that decision that we were going to be more aggressive and it started paying off for us.”

Manistique went ahead 12-8 in the third set before Poole went on a seven-point run to make it 16-12 Gladiators after an ace. The Emeralds responded to pull within 16-15 on a kill by Emilee McDaniel, but they never pulled even.

“I think St. Francis definitely got their offense going,” Emeralds coach Amy Nixon said. “They have good hitters, and our defense did their best to try to adjust our block. You’re not going to get to every ball.

“Did we adjust our offense? Obviously not.”

With a regional title in reach, the Gladiators began the fourth set on an 8-3 run that was capped by a kill from Gwyneth Bramer. Manistique then fought hard and began to chip away, eventually tying the score 16-16 on an ace by McDaniel.

“We knew going into that set that it was going to be the hardest set to win,” Nance said. “I think we just have to have a calm mindset going into that.”

The Gladiators regained a 20-17 lead on a kill by Poole. The Emeralds got to within 22-20 after a block-kill by McDaniel, but the Gladiators maintained their lead and won the match on a Manistique service error.

“It’s really tough when you know that you’re at their level and you can play with them and have the ability to beat them,” Nixon said. “That’s what I think hurts the most. I don’t think they were necessarily the better team, but they showed it tonight and that’s what the outcome proves.”

Poole led the Gladiators with 24 kills, 14 digs, two aces and one assist.

The Gladiators play Beaverton in the Division 3 quarterfinals Tuesday at Houghton Lake.

Smith, McDaniel, LaBar and Jeanni Chartier each played their final game as an Emerald.

“I feel like this is one of the best teams Manistique volleyball has ever put out, so I’m really proud of them,” Nixon said. “The four seniors on my team have really taken over a leadership role and tried to lead this team back to this spot, in addition to my two returners (Kayla Muth and Madison Zellar) who were on the team last year as sophomores.”