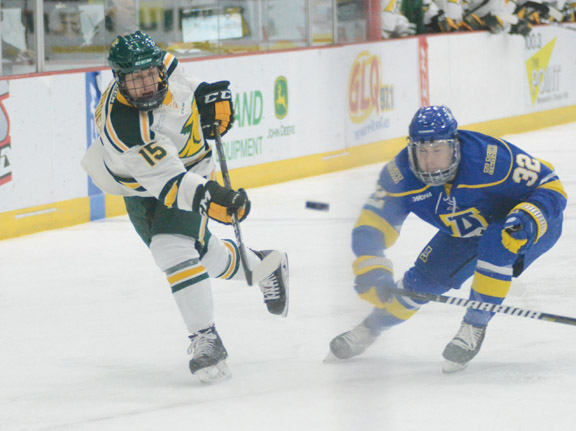 “Their goaltending has been phenomenal and it doesn’t matter which guy played for them, they all have great numbers.” — Grant Potulny, NMU head hockey coach, on Michigan Tech’s defense

MARQUETTE — Heading into last weekend’s series with Alaska-Fairbanks, the spotlight for the Northern Michigan University hockey team was on its struggles on defense and keeping the puck out of its own net.

The No. 19-ranked Wildcats improved in that area against the Nanooks, giving up four goals compared to eight the previous weekend against St. Cloud State.

However, another issue that NMU has had this season is starting games poorly. That became blatantly clear on Saturday, when it fell behind UAF early and was forced to rally to tie it only to give up the game-winner soon after.

The Wildcats (7-3-2, 5-1 WCHA) definitely can’t afford to have that happen again this weekend when they face rival Michigan Tech. The Huskies (5-6, 3-5) have been slow out of the gates, getting swept by the Nanooks at home and dropping three straight games at one point, two to Minnesota State-Mankato and the other to North Dakota. They’re also 0-4 at home.

However, Tech swept Lake Superior State on the road last weekend, so it appears that maybe it’s moving in the right direction.

“(The Huskies) defend like crazy,” Potulny said Tuesday. “If you look at their numbers, they give up two goals a game (which is tied for seventh in the nation).

“It’s hard to win as an opponent if you only score two. So we have to find a way to generate some offense….

“Their goaltending has been phenomenal and it doesn’t matter which guy played for them, they all have great numbers. (Matt) Jurusik has played well for them lately.

“Because they defend so well, there’s going to be stretches where we’re not going to get much done offensively as we’d hope, but you have to stay with it. You can’t get frustrated and you have to just keep going back to it and hopefully, find a little daylight.”

Speaking of daylight, things seem to be a little sunnier now for the Wildcats. After what happened during the game against Alaska on Saturday and the frustration that lingered afterward, Potulny started the week with a new approach.

“I thought we played pretty good on Friday,” he said. “Saturday, there’s moments that we had to change. But you have to flush it. Yesterday, for practice, what would I like to do? What I’d like to do isn’t going to make us any better.

“We did video and I sent them bowling. Park it, move on, spend the day with your teammates and come back today and let’s get better. At the end of the day, that’s the goal of every team, to get better for the end of the year. Me carrying this to make me feel better doesn’t make our team better.”

Another approach that Potulny is changing is the goaltending situation. Northern goalies John Hawthorne and Nolan Kent have split time this season, with Hawthorne being the first to play two games in a weekend as he started both nights against Alaska.

“I think they’re both going to play,” he said. “Going in, I thought John played good on Friday and every once in awhile, somebody has a team’s number. So I wanted to give John a chance. Nolan has been in that building (Tech’s home rink). He hasn’t played there, but he’s been there.”

Northern’s strength this year has been its offense, as it is 12th in the nation averaging 3.58 goals per game, and also sixth on the power play. However, it hasn’t been flawless and Potulny feels that his team has relied too heavily on its power play, which is about to face a strong MTU penalty kill that’s 12th in the country.

“The area that we have to get better offensively is 5-on-5 scoring,” he said. “We’re kind of living and dying on the power play, and Saturday night we had a chance on the power play at the end to tie the game and it’s going to happen where you’re just not going to score. We have to do a better job 5-on-5 and I think it goes hand in hand with our defending 5-on-5.

“I’m looking forward to a different environment, whether it’s even practicing at Lakeview (Arena) this week. Being home for a month is a long time. So that’ll get something fresh going. I’m excited to go on the road.”

The puck drops at 7 p.m. Friday in Houghton and at 6 p.m. Saturday in Marquette. Both games are scheduled to be televised on Fox-U.P.