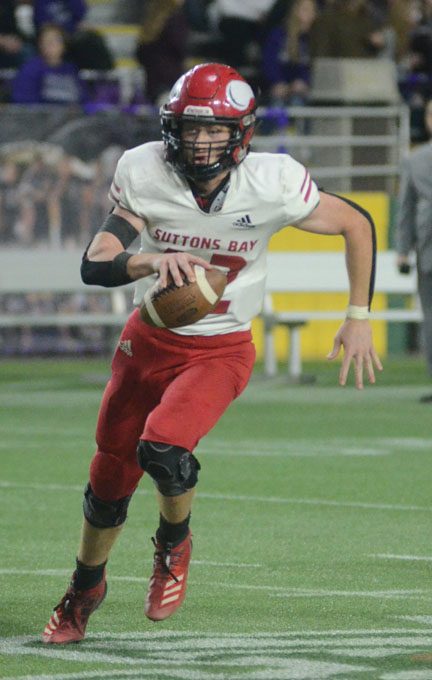 MARQUETTE — A long trip almost from Indiana was worth it for the Colon football team after it won the MHSAA 8-player Division 1 state championship on Saturday in the Superior Dome.

Colon head coach Robbie Hattan credited his defense and thorough conditioning to get over the top.

“In the regular season, our first-team defense didn’t give up a point,” he said. “We condition so much. During camp, we have different military branches come in to push our kids. We had the Navy SEALs, we had the Army Rangers, Air Force Special Ops. These kids were putting in the work. We figured it out (that) we ran 168 miles this season.”

“The one thing that I said to our team was I wanted each player to leave with an empty tank and they did,” he said. “So that’s all I can ask for.”

Trying to maintain a slim one-point lead at the start of the third quarter, the Magi made a huge play defensively. With the ball deep in SB territory, defensive lineman Brandon Crawford intercepted a screen pass and ran it into the end zone for a 14-6 lead.

The Northmen answered when Opie scrambled and hit Hugh Periard with a 47-yard pass to the Colon 37. On fourth-and-inches at the Magi 14, Opie sneaked it for a first down. Two plays after that, he scored on a 4-yard run. He also picked up the 2-point conversion and the game was tied at 14-14.

Another pair of backbreakers in the fourth quarter wrapped things up. Despite a 31-yard run from SB’s Camryn Knaub to get the ball to the Colon 6, Opie’s subsequent fourth-down pass fell incomplete.

Then two plays later, Crawford rumbled down the Magi sideline for a 94-yard TD. Though the conversion failed, Colon led by 12 points with 7:36 left.

Suttons Bay had one real last chance to get back in it after blocking a Colon punt with about six minutes remaining, but Opie was intercepted by Jonathan West.