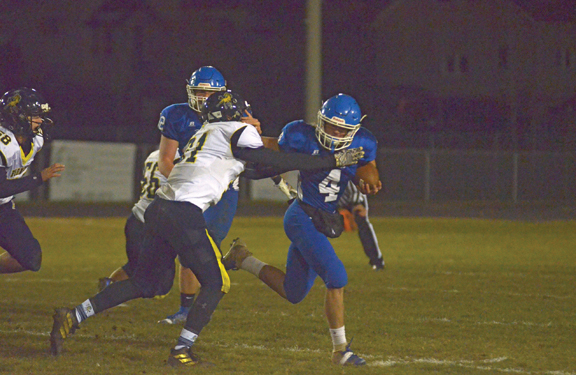 ISHPEMING — It was going to be fairly difficult for the Ishpeming varsity football team to top last week’s performance in its regular-season finale against Bark River-Harris.

They did, though, at least statistically speaking.

The Hematites racked up 534 yards of total offense, 41 more than they put up last week, rolling by the Broncos once again by a score of 48-8 in Friday’s MHSAA Division 8 predistrict playoff opener at the Ishpeming Playgrounds.

The trio’s offensive performance propelled the Hematites into next week’s district round, hosting the winner of this afternoon’s game between Lake Linden-Hubbell (6-3) and West Iron County (7-2) with a date and time to be determined.

Friday was also Niemi’s first playoff victory as a head coach, but he passed all the credit down to his players.

“Hats off to our kids,” he said. “I’m proud of the guys for being able to make the playoffs and get this playoff win and get to the next game. Right now, we’re sort of playing for our 16 seniors. It’s not easy seeing the same team two weeks in a row, because you don’t know what they’re going to bring to the table, but we were able to handle it.”

Pruett, Corkin and Swanson combined for 471 of the yards, with Swanson collecting 252 rushing yards on just seven attempts with two TDs. Corkin rushed for 120 yards and three TDs while Pruett had 35 yards on the ground and 64 through the air while completing two passes for two TDs overall.

“They give us a nice three-headed monster back there,” Niemi said. “It gives us some options, so we’ve just got to keep repping that and refining that.”

Ishpeming saw both the Lakes and the Wykons in the regular season, topping LL-H on the road 36-34 in the waning seconds of the game while shutting out WIC five weeks later 28-0. But Niemi said no matter the outcome of today’s contest between the two, his team’s approach will remain the same.

“I don’t want to comment on who we’d rather see, but we’re just going to wait and see who wins that football game, take our same approach and prepare just like we normally do week in and week out,” he said.

Asked how far his team can go, Niemi said it all comes down to a healthy roster.

After the Broncos were stopped on the night’s opening possession, Pruett took a 15-yard run to the end zone, primarily set up by three rushes of 15-plus yards from Swanson to get the Hematites into great field position. That made the score 6-0 just over three minutes in.

The Hematites added two more TDs in the first quarter, the second coming from Corkin for a 10-yard score and the third being Pruett’s pass to Kugler, a 34-yard strike over the middle on the first play after Broncos junior quarterback Nick Javurek was picked off by Swanson.

The score was 22-0 after one quarter and 42-0 at halftime. Second quarter TDs were scored by Swanson from 45 and 74 yards and Corkin on a 25-yard run.

Ishpeming received the second-half kickoff as the running clock took effect. Corkin added one more TD for Ishpeming, this time from 11 yards to make it 48-0.

The Hematites then put their second string into the game, and the Broncos finally managed to get on the scoreboard with 7:44 remaining.

The Broncos finished with 109 yards of offense, led by Javurek, who went 12 of 17 through the air for 100 yards. Junior receiver Joseph Stein had five catches for 56 yards while also leading with eight yards on the ground.