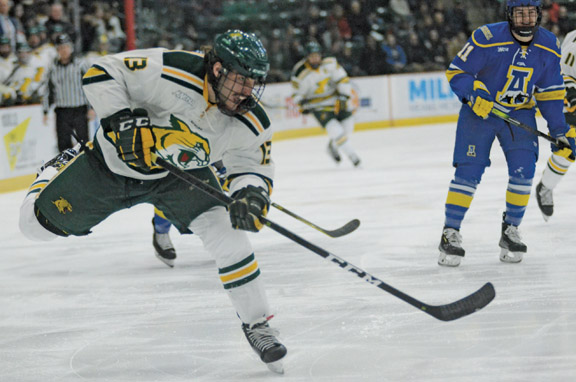 Northern Michigan University’s Luke Voltin, left, takes a shot on goal in the Wildcats’ game against Alaska-Fairbanks on Friday night at the Berry Events Center in Marquette. (Journal photo by Amy Grigas)

MARQUETTE — Heading into this weekend, the Northern Michigan University hockey team needed to improve in its zone as the Wildcats struggled to keep the puck out of its own net last weekend against St. Cloud State.

On Friday, the Wildcats accomplished that task for the most part as they held Alaska Fairbanks to just one goal on 17 shots while getting two power-play tallies from Joe Nardi for a 2-1 victory at the Berry Events Center. NMU goalie John Hawthorne got the win in net, finishing with 16 saves.

“It was a really good defensive effort,” Northern head coach Grant Potulny said. “We didn’t change much and we probably just went back and coached it…. Trying to get guys in areas where you’re vulnerable.

“That’s on us as coaches. We haven’t probably coached that enough. I thought tonight was a really good effort.”

Nardi said that the team went back to fundamentals on defense and staying in control when under pressure in the zone.

“I think we went back to video and kind of went back to the basics,” he said. “Shutting guys down early and layering up our defense. I think just being tight when they had the puck down there for awhile. We just collapsed tight to the house and just stayed calm in those types of situations.”

The Wildcats have struggled out of the gate in the first period this season, especially on Fridays, and it looked like Alaska would make them pay again in the first few seconds as Justin Young got a pass from behind the net. He tried to go five-hole on Hawthorne, but the freshman made the save.

Seconds later, NMU had a great scoring chance as Griffin Loughran received a long pass at the Nanooks’ blue line, but his shot was saved by goalie Anton Martinsson.

Northern cashed in on its next chance after drawing an Alaska penalty. Loughran sent a pass from the near post into the crease, where Nardi beat Martinsson low at the 5:19 mark. The rest of the first was fairly quiet. NMU easily killed off two Alaska power plays, but at the same time, the Nanooks kept the Wildcats’ scoring chances to a minimum.

The second period was almost identical to the first with the Nanooks once again getting an early chance as defenseman James LaDouce got a great look at the net and sent a blast from the blue line, but it sailed just wide of the far post. A couple minutes later, the Wildcats struck again on a power play. Loughran again sent a pass into the crease from the post to Nardi, who tapped it past Martinsson to put NMU up 2-0.

With 13:11 remaining in the period, Alaska got its next decent opportunity when Roberts Kalkis’ shot was bobbled by Hawthorne, but he recovered just in time before the Nanooks could tap in the rebound. The Nanooks’ best scoring chance of the game came just after they killed off a penalty. Alaska forward Filip Fornaa Svensson got a pass for a partial breakaway, but Hawthorne made a sliding kick save to the far post to keep the Nanooks off the scoreboard. At the other end, Northern was held quiet by the Alaska defense.

Things got interesting in the third period as Alaska put more pressure on Hawthorne. With 15:49 left, LaDouce sent a pass to Logan Coomes at the near post that almost went in, but Hawthorne fell backward to keep it out of the net.

About three minutes later, LaDouce got a shot past Hawthorne. The senior got a cross-ice pass from Steven Jandric and beat the netminder glove-side to cut the Nanooks’ deficit to 2-1. However, the Wildcats kept Alaska at bay the rest of the way.