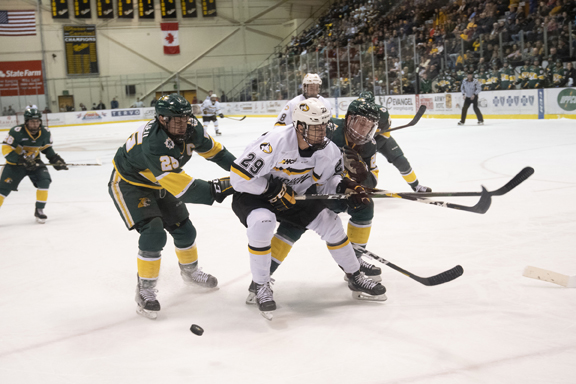 HOUGHTON — Michigan Tech’s offense showed up in the third period with a two-goal comeback to beat rival Northern Michigan 3-2 in a WCHA game played Friday.

The Huskies (6-6, 4-5 WCHA) have scored nine goals in the last three games, the most production in a three-game span in the season’s two months.

Friday’s win was Tech’s first at home this season. The Huskies are 36-31-8 at the John MacInnes Student Ice Arena all-time against the Wildcats. But NMU still holds a 75-65-14 all-time series lead.

“Very proud of our guys. We played extremely hard,” Michigan Tech head coach Joe Shawhan said. “Northern’s a tremendous hockey team. Well coached. They do everything well. I’m extremely proud of our guys for the way they battled, persevered and overcame in a lot of ways. Did a great job.”

Michigan Tech goaltender Matt Jurusik made a game-saving stop within the final 10 seconds when Wildcats center Ty Readman passed it up to Andre Ghantous, who had an open lane to Jurusik. Ghantous skated in, drifting to the Jurusik’s right and deked to his forehand, and Jurusik moved across and made a glove save. Tech cleared the zone and the clock expired.

“It’s disappointing because I thought for two periods we played really well,” Northern head coach Grant Potulny said. “We limited their chances. We had a lot of good opportunities tonight. Their goaltender was outstanding tonight. He was outstanding right until the end of the game. But we can’t take as many penalties as we took and continue to play with fire.”

The Wildcats had seven penalties on the night, while Tech had six.

The Huskies were 1 of 7 on the power play. Northern had three third-period penalties.

The lone successful Huskies power play came halfway through the third when Brian Halonen took a quick one-timer in the slot, between the faceoff dots, assisted by Eric Gotz and Seamus Donohue. It was Halonen’s fifth of the season.

The Huskies had tied the game 1:10 before, when Colin Swoyer’s wrist shot beat NMU goaltender Nolan Kent stick-side. Swoyer took a pass from Parker Saretsky that went between the skates of an NMU defender. Swoyer took the pass and drifted between the top of the circles where he let the shot go.

It was an even game throughout, with Northern Michigan having a slight edge in puck possession and offensive pressure in the first two periods. Tech found chances in bursts until the third period when forechecking led to the scoring chances.

Northern Michigan (7-4-2, 5-2) broke the scoreless tie early in the second when WCHA leading scorer Griffin Loughran hacked a rebound past Jurusik 52 seconds into the second period.

Loughran’s 10th goal of the season was assisted by Philip Beaulieu and Adam Roeder.