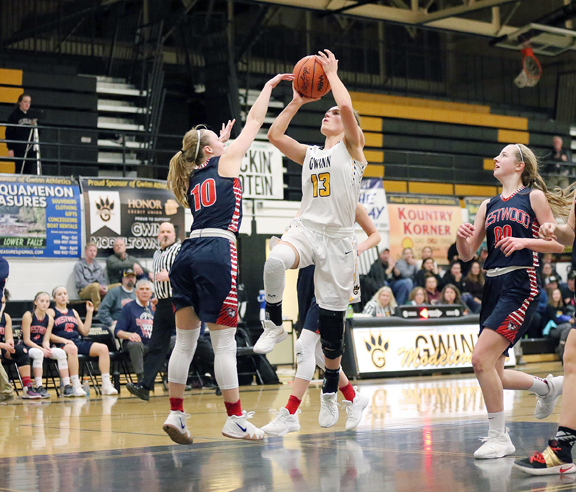 GWINN — Last year, the Gwinn girls basketball team was one win away from a district championship thanks to the strength of a strong senior core that included Trish McGuire and Brooke Mannor.

Even though McGuire and Mannor have moved on to play at Bay College, the cupboard isn’t bare, according to Modeltowners head coach Ben Olsen.

He says that he’s got another solid group this season.

“(Last year) I thought we were going to be a little bit better than we were,” he said. “We hit some shooting woes in the middle of the season. We lost some games I feel we maybe should’ve won because we were unable to make shots.

“I think what I take away from last year is we started the season, I think, 7-1 and we were shooting the ball really well. Then, middle to the end of the season, we just went cold. We lost a string of games there and I think we ended up 12-10 on the year or whatever.

“We started hot, cooled off and a lot of that had to do with our inability to shoot.

“We’ve got Marissa (Delmont) back and she’s a three-year starter. She was really, probably, the focal point of our team last year, probably her and Trish. She’s kind of our point guard and probably the one we’re going to be looking to get the ball to a lot of the time. She’ll be the one kind of running the show for us.

“Then Megan (Ruokolainen), a 5-(foot-)10 senior center is coming back for us. We’re looking for big things out of her, and then Tianna (Taylor) who has been with me since her freshman year, is also back.

“So I think those are the four that we’re going to be leaning on to do some damage. They’ve bene in the program obviously for a long time with me, most of them since sophomores and then Tianna since she was a freshman. That was kind of because she came into the program and we didn’t have a JV team. So she was kind of a de facto four-year player for me.”

Those may be the main four players, but Olsen says he has a solid supporting cast who can chip in when needed.

“Lena Pleaugh is going to play with us and she’s a freshman,” he said. “She’s the only underclassmen as far as ninth and 10th graders. Then I have Elliina Miilu, who is a junior, and Analise Hoevker is another senior who will get some time, and Halle Beauchamp is a center. She’s a girl who can stretch the floor, the post player that can step out and kind of stretch the floor and make some 3s for us.”

Right now, Olsen said like a lot of teams, his is focusing on defense right now, and that he is feeling positive going into the season.

“I think every coach is implementing their defensive strategies and plans. I think high school ball in particular, whether it’s boys or girls, the shooting comes and goes, it seems like. I’ve been doing this for a long enough time now that I know offensively there are nights where you’re hot as can be and it seems like you can’t miss and score 60 points. And others where you come out and it’s hard to break 30. But I think that defensive intensity can always stay there.

“I think, to be honest, coming into this year, I felt like we were going to take a step back because all the seniors like Trish, Brooke and Mallory Delmont all graduated.

“But we went through summer camp and I know summer team camps aren’t always a telltale sign, but we went something like 14-4 this summer. So it gave me a little bit of a breath of fresh air, too, because I felt like this group has a chance and we can be good even without those pieces that left.