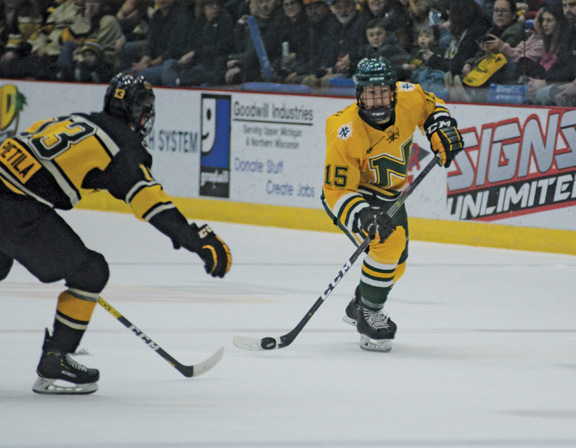 MARQUETTE — Sometimes in hockey, a team gives everything it can on the ice, but it just isn’t good enough in the end.

That’s how Northern Michigan University head coach Grant Potulny felt Saturday after the No. 19-ranked Wildcats fell to rival Michigan Tech 3-2 at the Berry Events Center. The loss gave the Huskies (7-6, 5-5 WCHA) the weekend sweep as NMU (7-5-2, 5-3) has now lost three games in a row.

“For three minutes last night, when we got penalties, and for maybe five or six minutes in the first period, I didn’t think we played great,” Potulny said. “The rest of that time was as good as we could play.

“I thought the penalties were very, very lopsided and that’s very disappointing. It’s hard when you’re in the box a lot. It’s a challenge.

“Their goaltender (Matt Jurusik), that’s as good of a two-game segment as any goalie who’s played against us. Maybe any goalie I’ve played back-to-back nights against. Going back to (Wade) Dubielewicz that played for Denver, which means nobody to anybody, but (back) when I was a player. That’s how long it’s been since I’ve seen a kid play that good.”

Huskies head coach Joe Shawhan praised the Wildcats’ efforts and felt his team was lucky to come out of the weekend with two victories.

“I thought it was a gutsy effort,” he said. “We came out and played probably 32 or 33 minutes of really good hockey. Northern pushed hard and did a great job. It was 3-0 and all of a sudden, it’s 3-2 and they gave themselves a chance. They competed extremely well. They won battles, they beat us to loose pucks in the zone.”

NMU put pressure on Jurusik and the Huskies’ defense from the start as Hank Sorensen and Vincent de Mey each got shots on net in the first minute. However, it was the Huskies who got on the scoreboard first as Raymond Brice beat Wildcats goalie John Hawthorne low to put Tech up 1-0 with 17:52 remaining in the first period.

MTU led 12-10 in shots on goal after one period, but Northern had the better scoring opportunities. Just a few seconds after the Brice goal, Joe Nardi’s shot in the slot was saved by Jurusik, but the rebound went right to de Mey. The sophomore got a shot off, but Jurusik made a sprawling save by the far post.

Griffin Loughran also had a chance in the slot with 14:17 remaining and de Mey had a shot ring off the post with eight minutes left.

In the second, Northern again had an early opportunity as Garrett Klee collected a loose puck at center ice and broke free into the offensive zone shorthanded. But Jurusik made a sliding save to the far post to deny him. Tech, on the other hand, took advantage of its first scoring chance that period. With 14 minutes to go, Alec Broetzman skated into the slot and fired a shot that rang off the pipe and past Hawthorne.

Visibly frustrated, the Wildcats tried to generate more offense. Andre Ghantous sending a cross-ice pass to Ben Newhouse at the right circle. Newhouse had the angle on Jurusik, but the senior got a piece of it to keep the puck out with 9:40 left. Two minutes later, Phil Beaulieu rang a shot off the post.

“Matt’s been tremendous,” Shawhan said. “He’s on a hot streak. He’s been our stabilizer and that was the difference in both games this weekend. If you don’t have good goaltending, it goes the other way for sure. You have to have it in order to try to beat the 18th or 19th ranked team in the country, which Northern is.”

The Huskies’ luck continued. Two Wildcats players fell down in the slot in front of Hawthorne, giving Tech defenseman Eric Gotz a wide-open net as he snapped it in to put the Huskies up 3-0. Hawthorne was then pulled for Nolan Kent.

NMU had one last good chance before the period break as it swarmed around the Huskies net.

It looked as if the Wildcats’ offensive struggles would continue in the third, but Northern finally got on the board with 6:55 gone. De Mey passed to Loughran at the left circle and the forward’s shot went off Jurusik and in. With 1:12 remaining with Kent pulled, Adam Roeder fired a shot that deflected off Jurusik and inside the near post.

A fight broke out in the final seconds with multiple penalties handed out, including five-minute majors and 10-minute game misconducts to Loughran and MTU’s Justin Misiak.