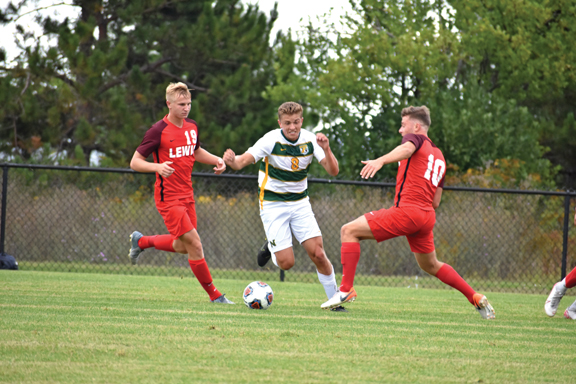 Palmbaum was named the GLIAC Freshman of the Year after leading the Wildcats in all three scoring categories with eight goals and six assists for 22 points.

He was also named to the ALL-GLIAC Second Team and was joined in that honor by senior teammate Callum Olpin and freshman teammate Francisco Espinoza.

In addition, NMU sophomore Kaffie Kurz was named honorable mention in the GLIAC.

Palmbaum, from Rocklin, California, totaled exactly a quarter of Northern’s goals and a fifth of the team’s assists by himself as the fourth-year program recorded highs of seven conference wins and eight overall victories, making the GLIAC Tournament for the third straight year.

Included in Palmbaum’s scoring was two game-winning goals as he also made program history and was second-fastest in NCAA Division II history with his hat trick of scoring three goals in 3 minutes, 45 seconds in a 4-1 victory at Upper Iowa on Oct. 18.

His season goal total was second-most in NMU history, while his six assists and 55 total shots were both program records.

Olpin, from Norwich, England, earned conference honors as a midfielder with two goals and three assists on 36 shots, putting 20, or more than half, on goal. He also made the GLIAC First Team in 2018.

Espinoza, from Buenos Aires, Argentina, had two goals and two assists, getting his first career goal in Northern’s other win over Upper Iowa, 2-0 at home on Sept. 22, and his second goal 1:01 into the second overtime for a 3-2 win at Northwood on Oct. 28.

Kurz, from Paynesville, Liberia, had an assist in the same win over Northwood.

Other accomplishments by the Wildcats this season included their first overtime win, another 3-2 win, this one in a single overtime, at home over Purdue Northwest on Sept. 20, along with first-time victories over Northwood and Saginaw Valley State.