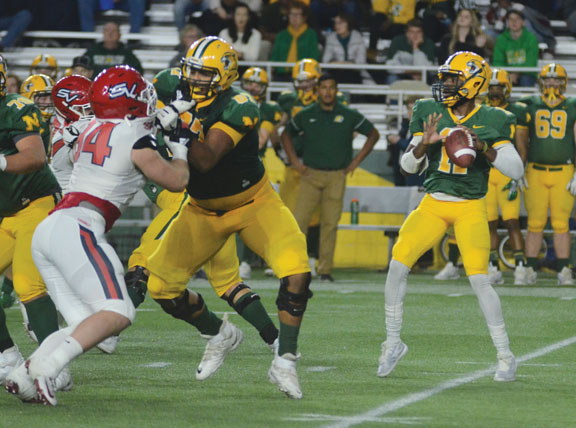 Northern Michigan University quarterback Keshawn Howard looks for an opening to throw a pass during the Wildcats’ home game against Saginaw Valley State on Nov. 9 at the Superior Dome in Marquette. (Journal photo by Amy Grigas)

“We’ve got to be able to throw the ball because everybody just packs the box.” — Kyle Nystrom, NMU head football coach, on the Wildcats’ offensive woes following a 1-9 season

MARQUETTE — This season’s long and disappointing road has come to an end for the Northern Michigan University football team.

The Wildcats (1-9, 0-8 GLIAC) closed out their 2019 campaign with a defeat at Ashland, Ohio, which was their ninth straight defeat after winning their season opener.

This year also included the program’s 10th straight loss to Michigan Tech, so it’s one NMU will definitely want to put behind them.

Looking at the Ashland game, which was somewhat competitive during the first half, Northern head coach Kyle Nystrom said it came down to the Wildcats’ lack of a passing game.

“I redid the whole defense again,” he said. “After the Saginaw (Valley State) game, we just couldn’t hold up in any man-match coverage. We did the secondary coverage system and basically played really soft over the top of everything just to prevent as many of the deep balls as we could.

“And they gave them a hard time. We forced them to run the ball a bit more. By halftime, they made some adjustments and they kind of just gave up. What was it, a four-point game at halftime?

“(We were) just trying to hang in there and just get a break. And we got that break in the third quarter when the game was still a tight game. We didn’t execute an option the right way and I think we would’ve hit pay dirt if we would’ve got it.

“Up that point, it was a very competitive football game into the fourth quarter. We just couldn’t move the ball and we just can’t throw the ball. So we’ve got to be able to throw the ball.”

That game is behind the Wildcats, though, so now they have to start focusing on next season.

Nystrom already knows where to start tweaking offensively. On the other side of the ball, he’s looking for his defenders to contribute more.

“I like where we’re at with the running backs. Deandre (Caldwell) will return after his surgery. The two freshmen are going to be just fine.

“We’ve got to get more mass in the offensive line. We’re a little bit light between the guards and center and we have a hard time running the zone against the defenses in our league.

“So we’ve got to get those situations resolved. We’ve got to be able to throw the ball because everybody just packs the box. We’ve got all 11 defenders and the coaching staff and the cheerleading squad. They got everybody packed in there.

“The only way to back them out of the box is to be able to go after them and hit them with the ball in the air. But they don’t respect that and they don’t play that way. So we’ve got to get that fixed.

“With the (line)backers, it almost feels like if the two linebackers or Antonio (Howard Jr.) don’t make the play on the run game, it’s going to get out for more than we all want it to.

“We’ve got to get our team more productive obviously. We’ve got some young players that are going to have to come around and get healthy. The linebackers will be fine and the secondary will be better because we played a lot of freshmen this year and they’ll be all back for next year.

“We’re looking at bringing some kids in. We’ll have to replace (punter) John (Kwiecinski), but (kicker) Daniel (Riser) is back and our long snapper is back. So special teams should be intact. We’ll just need to find a punter.”

When asked what he’s going to take from this season heading into the spring and the following fall, Nystrom said he had an inexperienced team and that caused them to get hit hard, but that they’ll learn from it and that every position is up for grabs in spring practice.

“(We were) a team that was very young and we got pushed around and ran by a little bit because we don’t match up experience-wise. But that will make you better with your younger players, because they’ve been in the fire earlier than most….

“When you’re playing more than a couple freshmen, it’s really difficult and we played a lot of freshmen this year and we have been playing a lot of freshmen since I’ve been here. Basically, the numbers in our program right now are the sophomore class, the redshirt freshmen and the true freshmen. That’s where our heavy numbers are.

“We’re going to get some players that had to sit out this year to get their eligibility back, that were transferred in, that are going to help us. So that will all come together in the offseason conditioning and the spring ball.

“I’m looking forward to that. I’m very interested to see how the quarterbacks come around. That will be fun for the spring as a coach, to see what’s going to transpire at the quarterback position.

“You really go into spring and all the positions are open, so you can compete and find out who wants to go get it. Every position will be open and we’ll move forward and go about our business.”