Difference of a quarter: Menominee Maroons pull away from Westwood Patriots in fourth period for 48-18 playoff win in Division 6 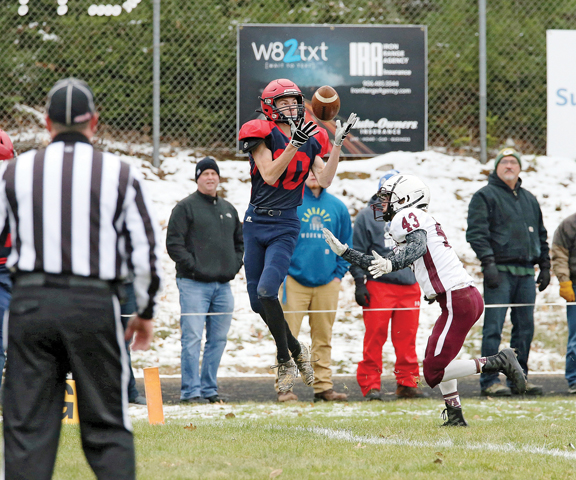 Westwood’s Chad Pohlman catches a pass on the goal line for a touchdown in the first quarter in the Patriots’ Division 6 playoff game against Menominee in Ishpeming on Saturday. Defending for the Maroons is Johnathan Boucher. (Photo courtesy Daryl T. Jarvinen)

ISHPEMING — With Menominee ahead by eight points, 20-12, early in the fourth quarter and Westwood quarterback Taylor Dellangelo racking up completions, the Maroons called on their own decorated athlete to make a stand.

The game was an MHSAA Division 6 first-round playoff game held at the Patriots’ field and Dellangelo had just been named the runner-up for Offensive Player of the Year among Large Schools in All-Upper Peninsula voting.

The winner of that Offensive Player of the Year voting was Menominee’s Keegan Monroe, but he showed why he’s an all-around player by shining on defense when his team most needed him to.

Monroe intercepted Dellangelo on three consecutive Patriots’ possessions, ranging sideline to sideline from his safety position. In a little more than five minutes of game time, the Maroons built their lead up to 41-12 en route to a 48-18 victory.

“Keegan was the Offensive Player of the Year and you can see why,” Menominee head coach Joe Noha said. “He’s a very dynamic player. He’s been doing that all year. We know what we have there, and he’s just — there’s a reason why he was named player of the year. He’s — offensively and defensively — he’s pretty good.”

To make those three interceptions, Monroe simply jumped higher than his opponents.

“I was just trying to bat the balls down at first,” Monroe said. “But they just came back down.”

But up until that point in the fourth quarter, it was still anyone’s game.

The Patriots had started the game rolling, recovering a Menominee fumble on the game’s opening kickoff and scoring in three plays on a 21-yard pass from Dellangelo to Chad Pohlman to lead 6-0.

The Maroons’ first possession was a three-and-out and the teams traded field position for the rest of the first quarter.

Then at the start of the second quarter, Menominee got on the board with a reception from Joseph Romero-Haire to Monroe, and Monroe stretched the play 16 yards to the front pylon. Mackenzie Hansen’s extra-point kick put Menominee up 7-6.

On the next Westwood possession, the Patriots’ punt was aborted after a bad snap and the Maroons’ Brendon Harris intercepted the ensuing pass attempt, returning it 33 yards for a touchdown.

Westwood head coach Scott Syrjala said he knew defeating Menominee would be a challenge based on advanced scouting — specifically the video of their standout Monroe — but adding mistakes like that bad snap made things that much more difficult.

“We shut him down the first half, and tried to just slow everything down — (then) shot ourselves in the foot with the punt.”

The Maroons’ head coach agreed, saying his team struggled to find its offense in the first half.

“They (Westwood) took some things away on us offensively, for Keegan, things that he’s been doing,” Noha said. “We had some opportunities, but we just missed some throws today that we normally get.”

Monroe picked up 46 yards on the ground on seven attempts, but did break free on a 29-yard run in the third quarter where he broke at least four tackles en route to the Westwood 8-yard line.

As for Dellangelo, an All-U.P. Dream Teamer back, he threw for 214 yards, completing 11 of 20 passes with two touchdowns. Both scoring passes went to Pohlman, who finished with six catches for 106 yards. Pohlman also returned a fourth-quarter kickoff 80 yards for a TD, accounting for all of Westwood’s scores.

“Dellangelo did a great job throwing the ball, obviously, with some big throws,” Noha said. “But we just played tougher inside.”

That inside toughness was what carried the Maroon offense, accounting for 236 rushing yards on 31 attempts. Harris, who led all rushers with 148 yards on 14 tries, scored two rushing touchdowns in addition to his interception-return TD.

Westwood’s head coach compared the combination of size and athleticism in both Harris and Monroe to that of his team and made it clear there was a stark contrast.

“But that (loss) doesn’t define their body of work, what they’ve done this season,” he said about his Patriots. “I think a lot of people said 3-6, 4-5 (record) maybe for us. For us to come out 7-2, beat Negaunee, beat Ishpeming, win the neighborhood, you can’t take that away from our kids.”