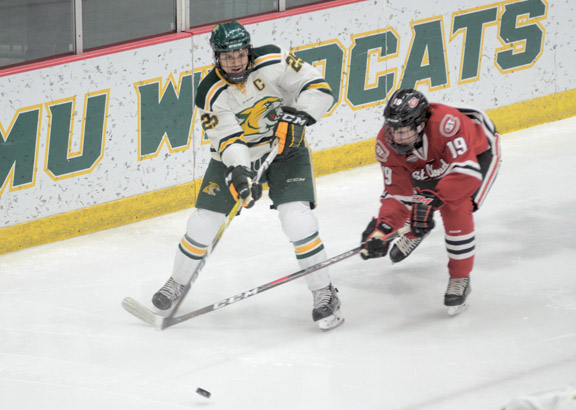 MARQUETTE — Sometimes all a hockey team needs is a break to get its act together.

For the Northern Michigan University squad, that break came in the form of a five-minute, third-period power play Friday night.

After getting mostly outplayed the majority of the game by St. Cloud State, the Wildcats received a huge gift as the Huskies were called for back-to-back major penalties just seconds apart. NMU then used that present to fire three goals past SCSU goalie David Hrenak, but couldn’t get the game-winner and were forced to settle for a 3-3 tie.

Despite the impressive comeback, the mood in the postgame press conference was negative as the sentiment seemed to be that the Wildcats got a tie out of what should’ve been a loss.

“We got beat in every aspect of the game tonight,” NMU head coach Grant Potulny said. “We got five players make three plays. That was the only reason that we got out of here with a tie. It seemed like the game meant more to them tonight than it did to us.

“I’m not trying to be negative. I’m not, but it’s just a fact of life that you can’t continue down this journey the way we have been and expect to just magically score every night. It’s just not going to happen.”

“The morale in the locker room is not good,” he said. “We got outworked today. We really got outworked. We’ve got to go back to the drawing boards tomorrow and we’ve got to figure ourselves out. Because if we didn’t have those majors, we didn’t have many scoring chances. We’ll figure it out and we’ll pull together.”

Things looked bleak for Northern in the third. Trailing 3-0, the Wildcats struggled to get anything going offensively until St. Cloud shot itself in the foot.

Those penalties gave the Wildcats a 5-on-3 power play and the momentum quickly shifted NMU’s way. Northern got its first goal on a one-timer from de Mey off a pass from Hank Sorensen, and at the 13:08 mark Andre Ghantous got the Wildcats within one as he sent a shot on net that went off of Hrenak’s skate and in.

As the power play wound down, Ghantous then tied it up on a wrister at 14:34 to send the game into an extra session.

“It’s not for sure you’re going to get goals on a 5-on-3,” de Mey said. “It could’ve been a spark (his own goal), but we just kept rolling and we had faith and that’s what got us back into the game.”

While the third period eventually went NMU’s way, the previous period was just bad all-around. NMU goalie John Hawthorne was forced to make two good saves in the opening minute and at the other end, the Wildcats’ offense wasn’t doing much with only five shots.

The Huskies finally got one past Hawthorne and it came when SCSU was at a disadvantage. With Easton Brodzinski in the box for roughing, the Huskies created a takeaway and raced up the ice. SCSU fired a shot that looked like it went in and flew out, but it got waved off. Play continued on and just a couple seconds later, Nick Poehling scored on a rebound to put the Huskies up 1-0.

Three minutes later, St. Cloud struck again as Will Hammer tapped a rebound past Hawthorne and just inside the post. With 8:17 left, there was a scary moment as a glass panel shattered on a hit by the Huskies bench and a fan was hit with the glass shrapnel and carried off on a stretcher.

With a little more than a minute remaining, the Huskies finished out the period on a high note as Jack Poehling saw an opening in front of the NMU net right off the faceoff. He raced into the slot, collected a loose puck and backhanded the puck past a sprawling Hawthorne, giving SCSU a 3-0 advantage. 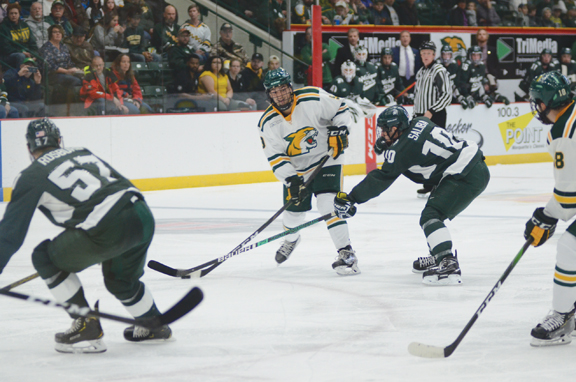