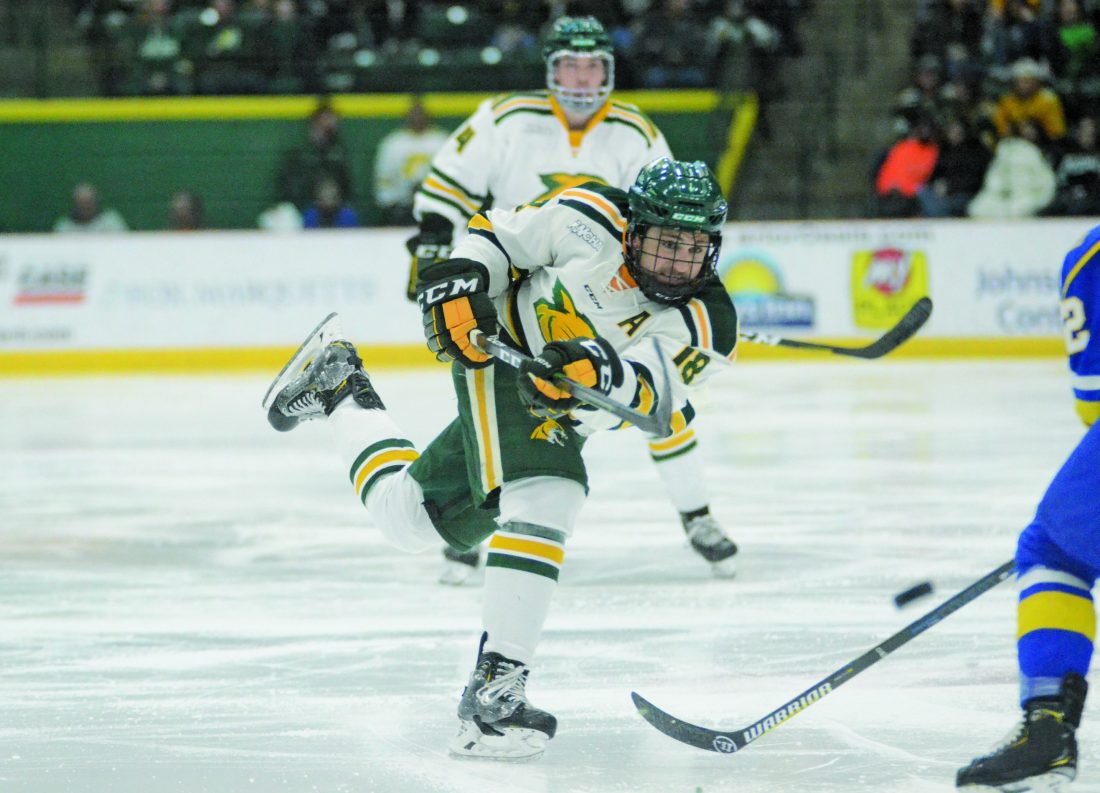 NMU’s Joseph Nardi takes a shot on goal in the game against Alaska-Fairbanks Saturday Nov. 16, 2019 at the Berry Events Center. (Journal photo by Amy Grigas)

MARQUETTE — Like in most any other sport, hockey teams want to begin games well and score first to have the best chance to win.

So the Northern Michigan University squad has been making things difficult for itself after a number of poor starts this season.

Sometimes, the No. 18-ranked Wildcats have battled back to either tie or win, but that didn’t happen Saturday night against Alaska-Fairbanks.

NMU gave up two goals in the first period and after tying it in the second, surrendered the game-winner shortly after as the Wildcats fell to the Nanooks 3-2.

After backstopping Northern’s 2-1 victory on Friday, goalie John Hawthorne made his first back-to-back start in net on Saturday and finished with 22 saves.

Northern head coach Grant Potulny was visibly upset in the postgame press conference and didn’t hold back, starting off with some strong statements about the Wildcats’ mental preparedness.

“I told the guys, look at college football. The same teams win every year. They do. And why do they? Because they’re prepared to play. They’re mature. They have a bar that they set.

“Clemson wasn’t always Clemson. When Nick Saban got the job at Alabama, they weren’t great.

“Ohio State, they weren’t always great. They were in the midst of a huge thing when Jim Tressel left. Why? The coach instilled, whether it’s Urban Meyer or whoever it is, they instill a level of play that they require from their team.

“And then guess what? You get better players and your program elevates. But as you’re going through it, there’s not ups and downs and hiccups. It’s a mature team. We’re not mature.”

Wildcats captain Phil Beaulieu is also well aware of the team’s struggles during the first period of games and said both he and the rest of the locker room are frustrated.

“It’s kind of hard to put a finger on it right now,” he said. “It’s just a little learning process that needs to go on. There’s going to be ebbs and flows in the season, but you can never accept starting like that, that’s for sure. I don’t know. It’s just a little frustrating.

“We have such good offensive talent that if we can figure out that defensive part of the game and our starts, we could be very dangerous. We’re just going to keep working on trying to figure that out. Obviously, it’s a little frustrating, but all you can do is keep working to get better.”

NMU’s first-period woes started early Saturday. The Nanooks had two decent scoring chances on shots from Colton Leiter and Colin Doyle, but Hawthorne made both saves.

Meanwhile, Northern didn’t register its first shot until nearly eight minutes in, coming seconds after Hawthorne was forced to make back-to-back saves on Doyle and Filip Fornaa Svensson to keep the Alaska off the scoreboard.

Hawthorne couldn’t keep UAF scoreless for long, though. With a little more than seven minutes left, Leiter sent a shot off the pipe and out, but Markus Komuls got the rebound and beat Hawthorne to put the Nanooks up 1-0.

Less than two minutes later, Alaska struck again as Steven Jandric sent a shot off the near post and past Hawthorne, and now, the Nanooks had a two-goal advantage.

Northern didn’t get its first real scoring chance until about 4:20 remaining when Griffin Loughran had a good look by the right faceoff circle, but Nanooks goalie Anton Martinsson just got a piece of it with his shoulder to keep it out of the net.

The period could’ve ended on a low note as Wildcats defenseman Hank Sorensen was given a five-minute major and a game misconduct for a contact-to-the-head penalty. However, NMU killed off the majority of it and the Nanooks went into the first break up 2-0 and having 1:06 remaining on their long power play.

The Wildcats killed off the rest of the penalty to start the second period and started to generate more offense. At 2:44, NMU got on the board on a nice goal by Ben Newhouse. Wildcats forward Caleb Schroer sent a cross-ice pass over to Newhouse, who beat Martinsson high glove-side to cut Northern’s deficit to one.

Even though the Wildcats managed to get out of the long kill and score soon after that, Potulny thinks penalties are becoming a big concern.

“We’ve got a player (Sorensen) leading the country in penalty minutes,” he said. “That’s a problem. Penalty kill was good. The power play was disappointing tonight. You show them the video that you cannot do this. This is a penalty. We take a penalty just like that tonight.

“You guys heard me in those four games in a row that we won, I didn’t think we played very good. Now there’s been eight games where we haven’t played great.”

NMU tied things up about a little more than three minutes later. After Beaulieu drew a Nanooks holding penalty, on the ensuing power play, he sent a pass over to Ty Readman in the slot. Martinsson made the save on Readman’s first attempt, but the forward collected his own rebound and beat the goalie blocker-side.

Midway through the period, Alaska answered back, though. With the puck lingering in the Wildcats defensive zone, a shot by Colton Leiter was denied by Hawthorne, but the rebound went to a waiting Justin Young, who lifted it over Hawthorne’s outstretched glove.

NMU thought it tied the game 3-3 with less than three minutes left on a power play, but Loughran’s shot to the near post was just kept out by Martinsson’s skate. The play was reviewed, but waved off again, and the Nanooks remained ahead 3-2 going into the final period.

If the no-goal review on Loughran’s attempt wasn’t bothersome enough for the Wildcats, the third period definitely was as they hit the pipe three times. The first came with 13:56 left as Vincent de Mey’s shot in the slot rang off the crossbar. The next two came just seconds apart as a Loughran shot came off the near post with 11 minutes left and then Newhouse’s blast from the blue line went off the crossbar.

Hawthorne did his part to keep the deficit at one goal as he made a sliding kick save after Nanooks forward Tyler Cline surged past two Wildcats to the net. However, the Wildcats couldn’t get the tying goal as they were stopped on two power plays and didn’t do much in the final two minutes.

Northern will try to bounce back this weekend with its first home-and-home series of the season with rival Michigan Tech. Friday’s game is at 7 p.m. in Houghton and Saturday’s at 6 p.m. in Marquette.