All eyes will be on the Patriots: Westwood girls basketball team returns everyone from state quarterfinalists of last season 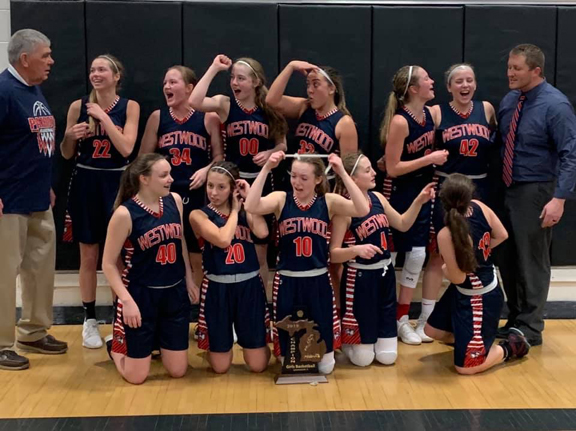 ISHPEMING — The Westwood girls might just be the team to watch in the Upper Peninsula this high school basketball season.

Coming off of a 24-2 record and a run to the MHSAA Division 3 state quarterfinals last season, head coach Kurt Corcoran and the Patriots return everyone from last year’s playoff run, a rare occurrence for a team whose ultimate goal may have ended earlier than it had hoped.

Westwood, who was last season’s Upper Peninsula Sportswriters and Sportscasters Association Division 3 Team of the Year, soared through almost everyone, with its only regular season loss coming at the hands of Negaunee, before the season came to a crashing halt after falling to Lake City 50-46 in the quarterfinals.

“It was obviously disappointing, especially since we felt like we were the better team….” Corcoran said of the Lake City game. “We discuss that game all the time, and we try to keep ‘unfinished business’ fresh in the girls’ minds.

“That being said, before the Lake City game, we had to get by a tough Charlevoix team. We squeezed one out against West Iron County where (the Wykons) had a seven-point lead late in the third quarter before that. Gwinn almost nicked us in the district finals before that, too.

“Everybody wants to talk about getting to state finals, but it’s not lost on us that we have a very tough road ahead. Madi (Koski) and Tessa (Leece) were sophomores when we upset Negaunee when they went 20-0. Everybody had them in the state finals and then they lost in the opening round of districts.

“It’s about being a master psychologist. We need to inspire the girls, but also knock them down and tell them life will throw us curve balls. Injuries happen and upsets happen every night. Deep run? Yeah, that would be great. But there’s no guarantee we’ll make it there.”

Koski and Leece are now the star seniors looking to lead the Patriots. Both have already signed national letters of intent to continue their academic and basketball careers, with Koski going to Ferris State and Leece to Michigan Tech.

Leece was the recipient of many awards and honors last season, the biggest being named the U.P.’s Division 1-3 Player of the Year by the UPSSA. The All-U.P. Dream Teamer averaged 15.2 points, 5.6 rebounds and 3.1 steals per game.

Koski was also named to the Dream Team and averaged over 15 points a game.

“Madi and Tessa are your quintessential leaders, teammates and seniors,” Corcoran said. “They’re the full package, which is part of the reason they’ve both signed Division II letters of intent. It’s kind of bittersweet because those girls have been in my lives longer than two of my kids and my wife.

“I’ve always been with them in some way, whether it was being their sixth-grade teacher, or whether they were attending my basketball camps in third grade. When you have two players of their caliber, you really get used to them. They’ve always been around and this is the year we’ve been waiting on for 10 years — senior year….

“We’re fortunate enough to have them in the program and they’re everything a coach could dream to have.”

Westwood returns five other players from its original roster of last season, as well as two JV callups from last year’s stretch run who will now be a part of this year’s varsity squad at the start.

Sophomore Jillian Koski returns, as do juniors Emily Nelson and Ellie Miller and seniors Meghan Johnson and Karlie Patron. Sophomores Natalie Prophet and Mallory Leece were late-season callups who are with the varsity from the get-go.

“Practice has been great,” Corcoran said. “We’re in the unique position where I have the exact same roster. That doesn’t happen too often.”

He agrees that a lot of opponents will measure themselves by how they play the Patriots.

“We’re the ones with the target on our backs. We’re going to get everybody’s best shot every night, and it’s going to be a feather in everybody’s cap to beat Westwood,” Corcoran said.

He said the ultimate goal is a state championship, and while this may be the year to do so, he’s also admittedly on edge about those expectations.

“Now we suddenly have these great expectations, and you only get those expectations when you have players and kids who have dedicated themselves to this program,” Corcoran said.