Ship out to Boston: After split with Michigan State Spartans, Northern Michigan University hockey team travels to another traditional power in Boston University 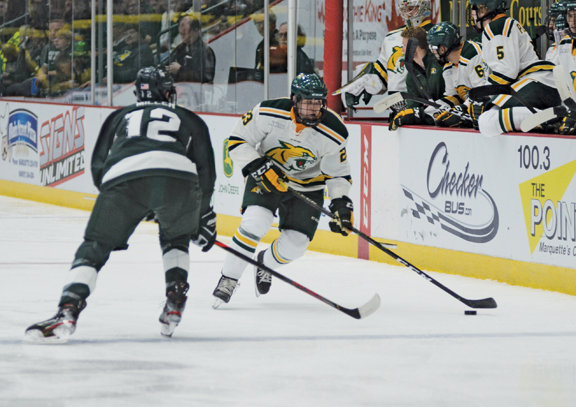 “All in all, I’m pleased with how we played over the weekend.” — Grant Potulny, NMU head hockey coach, after the Wildcats split at home against Michigan State

The Wildcats held Michigan State to 21 shots Friday in a 5-3 loss and just 15 on Saturday during a 2-0 shutout victory to split the series with the Spartans.

Being strong on defense will be important this weekend as well when NMU laces up its skates against No. 20 Boston University.

The Terriers, one of the country’s traditional powerhouse programs, put in seven goals on Saturday against Union and are eager to get back to the NCAA tournament as their four-year streak of bids was snapped last year when BU lost in the Hockey East semifinals to Northeastern.

Wildcats fans may remember the Terriers as NMU’s opponent when it won its lone national championship in 1991 and that BU team was loaded and fast.

“I know the Russian Red Army is defunct, but it seems like they’re alive and well at BU right now,” he said with a chuckle on Tuesday. “They are fast and they are skilled. They have depth. They are what you think of when you think of BU and Michigan and whoever historically — talented players that are fast. That’s who they are.

“You saw that (last) weekend where we averaged 28 (shots) over the weekend. It’d be nice to average 30, but if we can continue to outshoot people and keep limiting some of those major-league chances, we should be in a position to have a chance to win the game.

“The one thing that we do have to execute a little better is we had three 2-on-1s where we didn’t even get a shot. We got caught on one because of an errant pass. We just missed a backdoor on one and I can’t tell what happened. It looked like it was going to be close and we just missed it. Then we have a 3-on-1 where we miss the net. You have to capitalize on those.

“When you play teams that have electric offensive ability, you have to make sure that if you have the lead, you can extend it as much as you can.”

The Wildcats definitely bottled up the Spartans, especially on Saturday, as MSU struggled to generate any real offense. Some of that was due to the play of freshman goalie John Hawthorne, who won his first start, but a lot of it was just the skaters in front of him doing their jobs effectively.

“If you would’ve told me going into the weekend that we’d hold them to 21 shots Friday and 15 on Saturday, I would take it all day, every day,” Potulny said. “I thought we did a very good job breaking pucks out and when you do those things, you don’t have to defend.

“I thought we did a nice job finishing on the sheet in front of our goalies and getting some shooting lanes. That part of the game is good and that’s effort, and as a coach you love seeing that.

“Defense is just hard work. I thought we did a good job on that. Mentally, we probably were a little overexcited on Friday and you saw the result, a few penalties that are uncharacteristic of us, a couple of missed assignments, but those things are correctable.

“All in all, I’m pleased with how we played over the weekend.”

Potulny also liked how NMU’s special teams looked and said that might’ve made the difference in the Wildcats’ Saturday victory.

“I think we’re consciously spending more time on that this year because it’s so hard to score 5-on-5,” he said. “If you can have a real good penalty kill and score timely goals on the power play, that might result in one or two more wins.

“To be honest, maybe that was the difference in the game on Saturday. We scored a power play goal and then we shut them out on our PK. It’s something that we spend a lot of time working on, which we always do, but even more so this year.”

One person who helped Northern on its power play was sophomore forward Vincent De Mey. The California native scored on the power play Friday and also picked up an assist, following that up with a long goal Saturday that baffled Spartans goalie Drew DeRidder and clinched the win for the ‘Cats. He finished with a plus-2 on-ice rating on the weekend and was named WCHA Forward of the Week.

“I think you saw what Vinny is at the end of last year. He had a weird year. He was playing well and just became disjointed with injuries and illness.

“When he did finally come back, we were in the middle of a six- or eight- or 10-in-a-row win streak. When you’re winning like that, you’re gonna kind of keep playing the guys that are playing. He ended up kind of being stuck on the fourth line or maybe the extra forward.

“But he saw it in practice. Then in the back half, the last five or six games that mattered the most, playoffs and down the stretch, he ended up with five goals in his last six games or something, and it wasn’t like he was shoveling them in.

As good as NMU played against the Spartans, there’s still some questions that need to be answered, the biggest is who is starting in net. Nolan Kent played Friday against MSU and Hawthorne on Saturday and when asked if they’d split time again this weekend, Potulny wasn’t sure.

“I don’t know,” he said. “I didn’t know on Saturday if John was gonna play. They’re going to rotate and I don’t know if it’s a pure rotation or if we ride somebody for two in a row and somebody else plays three in a row. I’m probably leaning more toward that than I am continuing to rotate them.