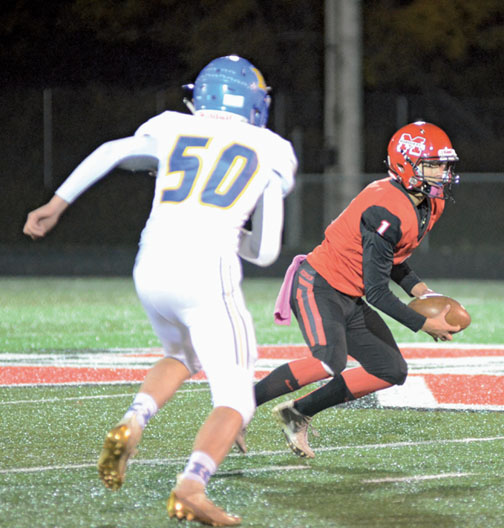 MARQUETTE — The wait is finally over for the Marquette Senior High School football team.

After using a balanced offensive attack and blowing out Kingsford 31-7, the Redmen clinched their first outright Great Northern Conference title since 1976. The win also put Marquette on the bubble for the MHSAA playoffs.

Now they will wait until Sunday night to find out their fate to be revealed on the Selection Sunday Show televised by Fox Sports Detroit-Plus.

When asked what it took to end the long conference championship drought, Marquette head coach Eric Mason gave all the credit to his players and also said that for now, he’s just happy with the conference title and not really focusing on the playoffs.

“It’s all them,” he said. “This is their deal. The kids come out and give us everything they got. When the kids listen to you and give you the effort that you ask for, good things happen and it has for this year. I’m just so happy for them.

“I’m feeling really good. I couldn’t be any worse right now. I can’t be nothing but good, because it’s fantastic. I’m so happy for the conference thing first and foremost. If the playoff situation happens, OK great. We’ll get ready to go for whoever we’ve got and go from there.”

For the Flivvers, the loss eliminates them from playoff contention and officially ends their season. Kingsford head coach Mark Novara said that the game pretty much came down to ball movement and said he appreciated the effort his seniors put into the season.

“It’s the same thing, I think, pretty much all year for us,” he said. “We had a hard time moving the ball. That was everything again tonight. It’s pretty much been our story all year.

“We’re a first-year program with a new head coach and that’s stuff we’ve got to get better at. We’ve got to get a little bit stronger and a little faster and all that good stuff.

“We’ll get there. It’s a work in progress for sure. It’s just taking a little bit of time, but we’ll be back to the drawing board Monday.

“I had a group of seniors who worked their tails off since January. That’s hard to watch those guys have to play their last game. We appreciate all they’ve done for us and (they) kind of set a standard for what our program wants to look like.”

Marquette had to battle some adversity early as starting quarterback Austin Ridl was knocked out of the game on the team’s opening possession. However, Ridl’s backup, Robert Apple, came in and was effective, ending any worries on the Redmen’s sideline.

“Robert has been doing the same things in practice, and at the beginning of the year, it was a tough decision (the starting quarterback),” Mason said. “It’s not like we were solidly (for one over the other), or one was a landslide winner over the other. So we knew Robert could play and he’s played all the way up until now.

“Hats off to the kid for coming in and working hard and picking us right up. We could’ve laid an egg right there and he picked us up and off we went.”

The Redmen had to settle for a Drew Wyble field goal on the first drive, but they got in the end zone on their next possession as Apple connected with Collin Hicks for a 27-yard touchdown pass. With the extra point, Marquette led 10-0 at the end of the first quarter.

Marquette started the second quarter with a missed Wyble field goal, but after forcing another Flivvers punt, the Redmen struck again. After Apple scrambled for a 36-yard gain, he hooked up with Hicks again, this time for a 21-yard touchdown. With the extra point, Marquette led 17-0.

Kingsford tried to trick the Redmen on their next possession, but their pass fell incomplete on a faked punt. Three plays later, Apple found Justin Jurmu on a slant route through tough coverage with a 15-yard TD pass. The extra point then gave Marquette a 24-0 advantage.

The Flivvers had a chance to get on the scoreboard right before halftime, but quarterback Tyler Kopp was intercepted in the end zone.

Marquette put the game away early in the third quarter. After sacking Kopp on first down, the Redmen intercepted another one of his passes deep in Kingsford territory. Two plays later, Apple tossed his third touchdown pass to Hicks and with the extra point, Marquette led 31-0.

The Flivvers did eventually get on the board late in the fourth quarter on a 25-yard touchdown pass from Kopp to Hunter Bilgreen, but the game’s outcome had been determined by then.