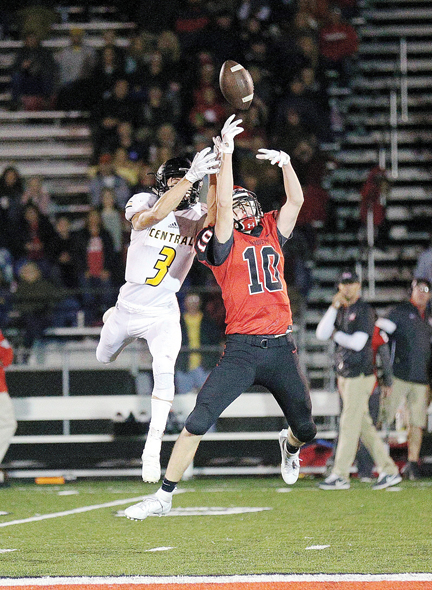 Marquette’s Ty Lotterman, right, tips a pass intended for Traverse City Central’s Trey Searles, left, during their game played at Marquette Senior High School on Sept. 6. Lotterman grabbed the deflection but lost the ball when hit by another TCC player with the ball ending up in the hands of the Redmen’s Desmond Mullen for an interception. (Photo courtesy Daryl T. Jarvinen)

“We’re getting to play with house money.” — Eric Mason, Marquette head coach, on the Redmen making the playoffs after being 2-4 three weeks ago

MARQUETTE — Although the season started rather inauspiciously for several of the squads, Marquette County turned out a bumper crop of high school football playoff teams when state pairings were announced on television Sunday night.

Four of the five county schools made the playoffs, though the only one that was in any doubt before the Selection Sunday Show on Fox Sports Detroit-Plus was Marquette.

Their first-round games will be played Friday evening or Saturday afternoon, with the official announcement of times to be made today.

Marquette is 5-4 and hoped there were enough spots open for teams like them and 4-4 squads once all the schools 5-3, 6-3 and better were slotted in.

It was, as the show’s hosts reported that a record 54 of the “wild card” teams got in after 202 were found to reach the automatic threshold.

The 11-man football playoffs need 256 schools, which are split into eight 32-team divisions, just enough for five weeks of playoffs to whittle down to single champion in each grouping.

“Until I saw it on TV, I really didn’t know for sure,” MSHS first-year head coach Eric Mason said of his team making it. “It was kind of surreal seeing our name there.”

It marks the Redmen’s first playoff appearance since 2014, the last of five straight years MSHS got in the postseason under previous head coach Dave L’Huillier. Before that run, the Redmen had only appeared once in the playoffs since they began in 1975.

The Redmen even got an extra mention on TV Sunday night after the show brought on the coach of their first-round opponent, Muskegon, which has been in the past three Division 3 state championship games.

Asked what he knew about Marquette, Shane Fairfield, the coach of the 9-0 Big Reds, said, “I know they’re really far away.”

Mason agreed that Muskegon is just as far away for Marquette.

“We get to play another game,” Mason said. “You can say we’re getting to play with house money.”

“At that point, we were only concerned about winning a game,” he said. “You have to take it week to week, you can only win the next game anyway.

“The playoffs never came up until last week. I know for myself, purposely I didn’t think about the playoffs until a week ago. We were so up and down, it was getting to where I only wanted to focus on a quarter at a time.”

Another team that started slowly was Westwood, which was 1-2 after a tough 14-8 home loss to Calumet on Sept. 13.

But the Patriots won their final six games to finish 7-2, good enough to host a game this weekend against Menominee (6-3).

The slow start wasn’t overly surprising after Westwood lost a lot of skill-position players from the previous year.

“This goes all the way back to last November after we lost to Calumet (in the playoffs),” WHS head coach Scott Syrjala said. “I got our (then) juniors together and asked them what they wanted to do.”

He said this year took some adjustments.

“We were green,” the coach said. “And I had some of the kids in the wrong spots. We changed some things, got some into positions that would better allow them to succeed.”

But he had concerns right up until Sunday night.

“I was worried that Menominee would overtake us,” Syrjala said about the Maroons’ playoff points that would determine who hosted their first-round game.

Menominee got a big boost in those points after upending previously undefeated Hopkins, a Division 5 playoff team, on Friday.

“I’m not surprised Menominee won, but I’m happy we get to host a game.”

“You can’t look ahead, you can’t overlook anybody who’s good enough to make the playoffs,” Syrjala added.

This marks the Patriots’ third straight playoff appearance and fifth in six years, all under Syrjala. Westwood had only made the playoffs four times before the string began in 2014.

The other two playoff teams — Negaunee and Ishpeming — are seasoned veterans of the playoff wars.

Like Negaunee, which will make its first playoff appearance since 2016 but had been in the playoffs 24 previous times under current coach Paul Jacobson and former legendary mentor Dick Koski.

“I had been checking out the playoff points, so I wasn’t surprised when I saw who we’re playing,” Jacobson said. “It’s better to not be surprised when the show comes on.

“For sure, we’re in a strong district. It’s been a couple years since we’ve been in the playoffs, so hopefully we can come out and make an extended run.

Negaunee was yet another team that got off to a slow start this year, opening 0-2 after a 30-6 home loss to Calumet on Sept. 6.

Ishpeming first-year coach George Niemi couldn’t be reached Sunday night. He took over this season from another legend, Jeff Olson. The Hematites are making their 22nd appearance in the playoffs, the vast majority under Olson.

Unlike his playoff counterparts, the Hematites jumped out of the gate at 3-0 before a two-week bump in the road came against Division 6 playoff teams Westwood and Negaunee.

Ishpeming righted its ship to finish by winning out in October and come into this weekend at 7-2.

That was good enough to earn their four-team district’s No. 1 ranking and a chance to host district No. 4 Bark River-Harris (5-4). Unlike the other three Marquette County playoff teams, it insures that with a win in the first round, the Hematites would remain at home in the district finals against the winner of Lake Linden-Hubbell (6-3) at West Iron County (7-2).

In addition, Ishpeming defeated all three of those district teams as all four are members of the Iron Division of the West PAC.

One other area team had a chance to make the playoffs but missed. After playing the eight-player game for the first time this fall, Newberry (5-4) missed out on those playoffs by about 3 1/2 playoff points.

Unlike 11-player, eight-player determines its playoff field solely on playoff points. And with just about every eight-player team being in Class D, the difference in points comes down to total wins and opponents’ wins, weighted heavily on teams you have beaten.

The Indians had a forfeit win and three on-the-field victories against schools with two wins or less, hurting their point total.