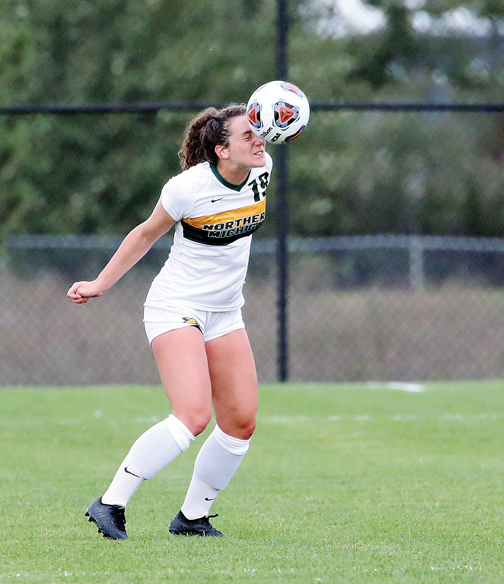 MARQUETTE — The Northern Michigan University women’s soccer team looks to even its GLIAC record with a pair of conference games at the NMU Soccer Field this weekend.

The Wildcats (3-7, 0-2 GLIAC) host nationally ranked No. 3 Grand Valley State at 4 p.m. Friday and Davenport at 1 p.m. Sunday. NMU remains at the home for the rest of this month, playing another pair of games in Marquette the following weekend against Saginaw Valley State and Ashland.

NMU played its final nonconference game on Sunday at Michigan Tech, winning 3-2 after taking a 2-1 halftime lead. Northern will host Tech in its GLIAC game the final day of the regular season, Friday, Nov. 8.

Sophomore Caroline Halonen had a goal and assist against the Huskies, both in the first half, and now has two goals this season along with a team-high three assists. She has also taken 44 shots, second in the league.

A pair of freshman connected for the game-winning goal in the match’s waning minutes. Evelyn Flor brought the ball up and passed it through the MTU defense and toward the goal, where it was taken by Isabelle Brusilow on the backside near the far post and knocked in for her first collegiate goal.

Junior Brianna Frontuto, who had eight saves vs. Tech, leads the GLIAC in saves with 65, 13 more than any other goalkeeper and ranking her 30th in the country.