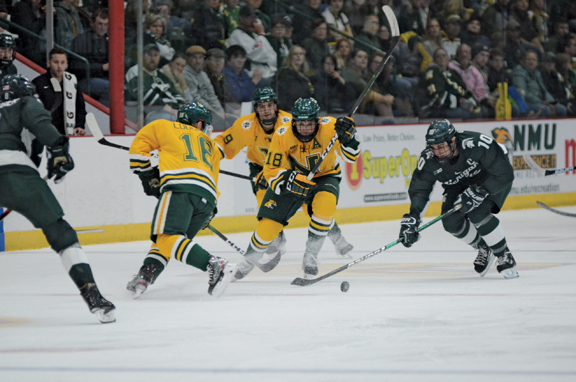 Michigan State’s Sam Saliba, right, carries the puck as he tries to get around a trio of Northern Michigan University players, from left, Griffin Loughran, Darien Craighead and Joseph Nardi, during their game on Oct. 12 at the Berry Events Center in Marquette. (Journal photo by Amy Grigas)

They took a three-goal lead, blew it, and then scored two goals in the final two minutes to win the game and complete a road sweep of Ferris State.

The No. 20 Wildcats are looking for less roller coaster and more of a carousel ride this weekend with an opponent that has given them fits over the years — Alabama-Huntsville.

Also two years ago, Huntsville bounced back from a 7-1 loss in Game 1 of the WCHA quarterfinals in Marquette and beat Northern 3-2 to force a deciding Game 3.

“I think they’re a proud program with a very good coach (Mike Corbett) that does a great job motivating and preparing his team whether they win or lose to come back the next night,” NMU head coach Grant Potulny said Tuesday. “It wasn’t just that (the playoff) game. They beat us at home, they beat us down there. Last year, we ended up losing to them in a shootout down there.

“They’ve played us hard and their guys play very hard. They are on the edge. They are physical and they just don’t give you any easy ice. So if you can execute and score on your chances, then it becomes down to a game of will.

“They’re a team that is going to play right to the end of every game and that’s the difference in having a little room or cushion or playing right to the end. Then it’s a one-shot game.”

Ferris was another team that played right to the end last weekend. The Bulldogs went toe to toe with the Wildcats on Friday and then made a furious comeback Saturday that ultimately came up short. Potulny was impressed with how Ferris played and had mixed feelings about how the weekend went.

“I thought we were opportunistic to start the game (Saturday),” the coach said. “Out of our six games, I thought that was the poorest we’ve played. The danger in those games is when you get up 4-1, they’re not going to stop playing. They’re competitive and they’re at home.

“You’ll get lulled into a little bit of sleepiness and I thought that happened to us. But again, we found a way in the end to win. As much as I would’ve liked to have that game be a little bit more locked down, there’s good teams that find a way to win and maybe we’ve shown that we kind of have a little bit of that resiliency in this group this year.

“You were down 4-1 (against Boston University) and came back and tied in the third period. Now you’re up 4-1 and we let them back in the game, but found a way to win the game.

“At the end of the day, I told the players that you play to win the game. It’s better to learn lessons from the games that you win than the games you lose. We’ve got a lot of things we’ve got to work on this week, especially defensively.”

Potulny also talked about the importance of being better on special teams, an area where NMU struggled badly Saturday. The Wildcats gave up a shorthanded goal, two power-play tallies and committed a penalty that cost them much of a five-minute power play.

“Penalty kill has been an area that we continue to try to work through, and (last) weekend, the power play didn’t do its part either,” he said. “When you get a five-minute major, those can really turn the game both ways. If you can score and you feel good about it, then you can put someone away. But typically, when someone kills a five, they usually find a way to win the game, or score on a shorty. They scored a shorty and killed a five and we still found a way to come out of that game with a win.”

When asked what helped put Northern over the top, Potulny said it was their goaltending as John Hawthorne got a win Friday and Nolan Kent did the same Saturday, with Kent earning WCHA Goaltender of the Week.

“Even though we gave up three and four (goals), I think our goaltending was very good,” he said. “They’re (the Bulldogs) a good team and their building is tough to play in. It was sold out and they’re very good at home. When I say OK or when I say poor, it’s no disrespect to them because I think we probably out-goaltended them.

“I don’t think we outplayed them. I think we made some crucial saves at some crucial moments to allow us to make a play and score a goal. We probably gave up more scoring chances this weekend than we have in as long as I can remember.”

NMU may have given up some scoring chances, but it also created some. Griffin Loughran was one of those players doing that as he scored four goals against Ferris, including a hat trick Saturday. Two goals were also game-winners and he’s now the nation’s leader with three. After the performance against the Bulldogs, Loughran earned WCHA Forward of the Week honors.

“They all count the same, but there’s goals that are more important than other ones,” Potulny said. “This year, he’s scored some very big goals for us. I think he’s got three game winners now. He’s really been an important driver for our offense and we need him to continue to be the complete player that he is and he has the ability to score and now you can see that, that he’s emerging as a sophomore as a guy who can consistently generate offense.”

Northern will need that consistency from everyone if it wants to extend its winning streak. The puck drops against the Chargers at 7 p.m. Friday and 6 p.m. Saturday at the Berry Events Center.