Munising pulls away for 4-set win over RR 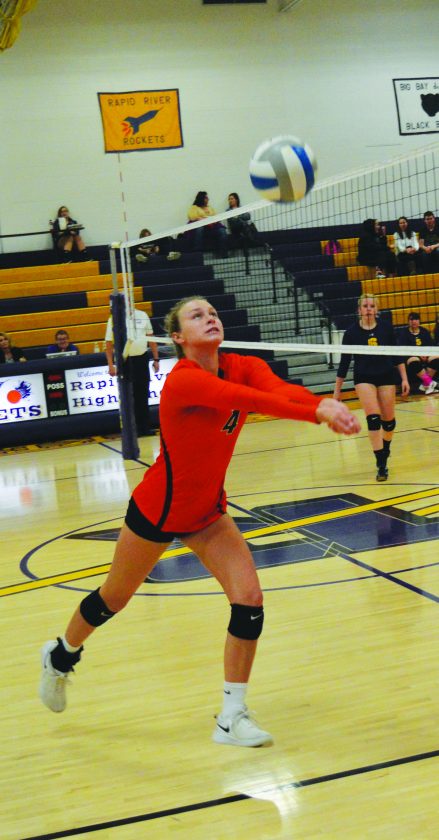 RAPID RIVER — After back-to-back sets that went down to the wire, Munising appeared to wear down Rapid River in their Skyline Central Conference volleyball match on Tuesday.

With the match tied 1-1, the Rockets took an early lead in the third set behind a four-point service run from Emily Goodacre to go up 5-3. However, Munising’s Taylin Behning went on a seven-point run soon after to put the Mustangs up 11-7.

The Rockets (5-8) went back ahead 13-12 on an ace by Myah Pearson and extended their lead to 16-14 before Munising’s Logan Peters went on a six-point run to put the Mustangs in front 20-16, and they carried that momentum to the finish for a one-set lead.

“Once we started imposing our will, our offense picked up, and that’s when you started seeing the change in the game.”

Munising (5-8) pulled ahead 8-3 in the fourth set after a kill by Behning. Munising’s lead reached 16-7 before Addie Christoff brought the Rockets within 16-12 after a five-point run that included a pair of aces. However, with the Mustangs leading 18-13, Crystal Murdock served for seven straight points to end the match.

“We just had a slow start to begin with,” Rockets coach Kristy Kerstner said. “Consistently we have slow starts. We got way too chaotic on our side and we were sloppy.”

The first two sets went the distance, with the Mustangs winning the opener and the Rockets taking the second.

“We saw Rapid a couple weeks ago at the Northern tournament (NMU Invitational), and I knew Kristy really has her girls playing hard, so effort on their side was good,” Cole said. “It was just a matter of us trying to match the effort and executing on our side. Luckily, we did pull out Set 1, which was big. It was good that we won the first there.”

Megan Matson led the Mustangs with 17 assists, 12 digs, three kills, two aces and one block; Behning added 24 digs, 10 kills, three aces and one block; Peters had 14 digs, four aces, three kills and one assist; Ainsley Bonevelle had 16 digs, six kills and five assists; Jenna Mattson had 40 digs and an ace; Murdock had seven blocks, six kills and five digs; and Audree Hines chipped in with five kills. Munising had 112 digs as a team.

Gabby Moss led the Rockets with 12 kills and two blocks. Kristin Goodacre added 10 kills, Cecilia Pilon had five kills, and Emily Goodacre and Pearson each chipped in with two kills.