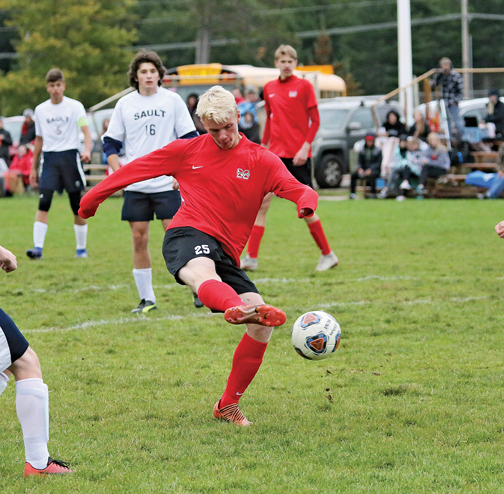 Marquette’s Max Dawson scores on this kick in the first half of a high school boys soccer game played against Sault Ste. Marie at the Kaufman Sports Complex in Marquette on Wednesday. (Photo courtesy Daryl T. Jarvinen)

MARQUETTE — Fall weather officially arrived in the Upper Peninsula Wednesday afternoon as temperatures fell below 50 degrees and an icy wind blew across the soccer field at the Kaufman Sports Complex in Marquette.

But the cold didn’t seem to bother the Marquette boys team at all as the Redmen were red hot from the start.

Halfway through the first half, Marquette led Sault Ste. Marie 5-0 before eventually mercy-ruling the Blue Devils 8-0 early in the second half.

“The Soo is really young this year,” Redmen head coach Dan Menze said. “They have like five freshmen and five sophomores. It’s a rebuilding kind of year for them.

“It’s senior night (for Marquette) and everybody came out ready to play and it’s tough when you’ve got basically 10 seniors on the field against a bunch of underclassmen and everything.

“The guys have been preparing all year for it and we’re moving the ball around really well. The offense is clicking and obviously, it showed.

“It felt like it didn’t really matter who I was putting where, they were getting the job done today. It was a fun game and it was really cool to see some kids that haven’t scored yet this year get some goals and everything. It was good.”

Trevor Salmon led the Redmen offensively, firing in two breakaway goals for a strong performance on the night honoring his class in school.

“It was a big game and it was senior night and we all wanted to pretty much go home early because it was cold out,” he said with a smile.

Up 5-0 and the ball almost constantly being kept in the Soo defensive zone, the Redmen caught a break to get their sixth tally as the Blue Devils goalie made a good save, but the ball deflected off a Soo player and into the back of the net.

Shortly after that, a Marquette forward fired a shot off the crossbar. The Soo keeper gave chase to the far post, but the ball rolled inside the near post. Now leading 7-0, the Redmen had two more opportunities to put the game away before halftime, but the Blue Devils deflected both shots wide of the net.

Eventually, with 31:46 left in the second half, Marquette closed out the victory when the ball went off a Soo player and into the net.

The Redmen take on the Northern Michigan University men’s club team next week and that’ll be followed by an intrasquad match where the seniors play against their varsity teammates.

Menze said that his squad is trying to get into a tournament at Northland Pines High School in Eagle River, Wisconsin, on Oct. 12, but if the Redmen can’t get in, the season will end with a tournament on Oct. 19, where he thinks they’ll play Iron Mountain and Kingsford.

“Kingsford and Iron Mountain have been tough this year, so it’ll be a really nice end-of-the-year tournament with tough games,” Menze said. “I think if they come to play and they do what we’ve been doing all year, we should do pretty well.”