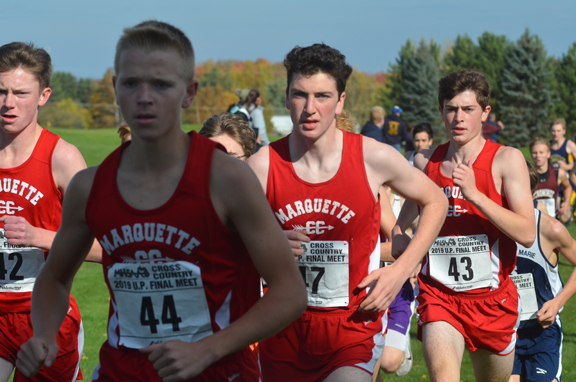 HARVEY — It’s been a while since the Marquette boys cross country team was on the top of the Upper Peninsula, but the Redmen climbed to the summit Saturday at the MHSAA Division 1 U.P. Finals at Gentz’s Homestead Golf Course.

Marquette had three runners finish in the top 10 to finish with 51 points, six ahead of last year’s champion Sault Ste. Marie and 12 ahead of third-place Houghton. It’s the Redmen’s first U.P. title since 2014 and the first under head coach Kyle Detmers.

“It was tight,” Detmers said. “There was not much in between. We ran as a pack all year and the order changed it seemed like every meet, but just a great job to the seniors and also the freshmen in there. My top five were all in the top 15.

“It’s an individual sport, but we run as a team. At the end, that was just enough. Sault Ste. Marie, Jim Martin does a great job coaching, and Houghton, they’ve got great coaches up there. It just came down to the last mile.”

“Hogan really came out today and led the way as a senior, finishing seventh,” Detmers said. “Moses is a senior and finished eighth and then Lincoln, who was traditionally one of my five, six or sevens (runners) was my No. 3 and he finished ninth.

“Then the other guys just came in. Carson, a freshman, Luke, and Colin, I had two freshmen in there and a sophomore. No complaints at all about that group. Just a great day.”