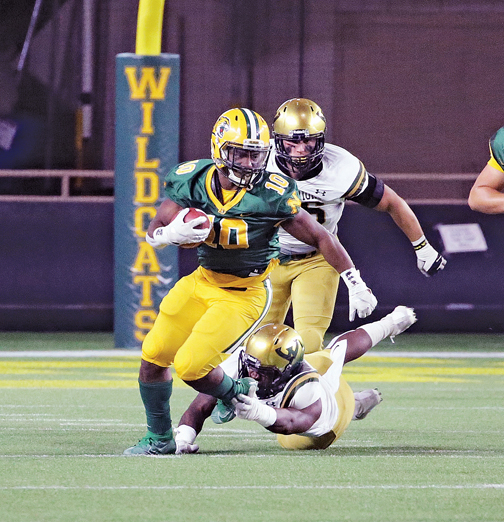 The first one has to do with the Wildcats’ current season streak as they’ve dropped their last five games, including Saturday’s 24-20 loss at Michigan Tech. That’s also part of the second losing streak, as it was NMU’s 10th straight loss to the Huskies.

Grand Valley has also been consistent this year, with its only loss coming to Ashland on a Hail Mary at the final horn. In addition, GVSU has been, arguably, the Wildcats’ toughest opponent as it has gone 14-1 against NMU since 2002 and has won four straight contests in the series.

Thanks to that consistent quality of play over the years, Wildcats head coach Kyle Nystrom knows what he’s going to get from GVSU.

“It’s Grand Valley,” he said Tuesday. “I expect the same thing that I always expect out of them. They’re going through a little transition at quarterback, but it’s still Grand Valley. They still have big players.

“They’re going through a transition at running back and I think they’re nicked up, but they’ve always had good running backs. They’ve played four of them so far this year, but they’re all good backs.

“I know we’ll see (quarterback Cole) Kotopka. I’m expecting to see him. He’s sort of the returning older player that has been playing and I think he’s had a little bit of medical issues at times during the season. He’s back and forth a little bit, so they’ll play Cade Peterson, who we recruited a couple years ago.

“So those two are in and out. They manage the offense based on what those guys can (do). They’re still good.

“Austin Paritee is still there as a big-play wideout. They’ve always got great personnel offensively. Defensively, they’ll keep us busy.

“We’re going to have to do a good job in the run game and not give up the big plays again.”

Looking back at last weekend, the Wildcats definitely looked good at times against Tech. Tyshon King ran for 114 yards and caught a 75-yard touchdown pass to give Northern a 20-17 lead going into the fourth quarter. The Wildcats’ defense also forced and recovered four fumbles, usually is a sign you’re going to come out on top.

The bad part came in the passing game as NMU only managed 158 yards through the air, nearly half coming on the TD pass to King. Meanwhile, the Huskies torched the Wildcats defense for 347 yards. Nystrom said passing is what was the ultimate cause of the Wildcats’ defeat.

“The game where we lost our edge was in the passing game on both sides of the ball,” he said. “We couldn’t handle Jacob (Wenzlick) and Ben (Hartley), their two senior receivers, when we needed to handle them. We knew we’d need to handle them. There’s no shock in that. That would be the difference in the game, limiting their ability to make big plays and we didn’t do that with Wenzlick or Hartley when we needed to, or (quarterback) Will Ark for that. That was the difference on that side.

“I felt pretty good about defending the run game against them and then getting the takeaways. I thought Tyshon really did a nice job, a true freshman, out there. He’s a little bit nicked still, but he almost willed us to a win. He did a fantastic job running the ball.

“But that was the difference in the game, the passing game. For both the offense and the defense.”

NMU will need to be efficient in both areas if it wants to pull off the big upset at 1 p.m. Saturday in the Superior Dome.