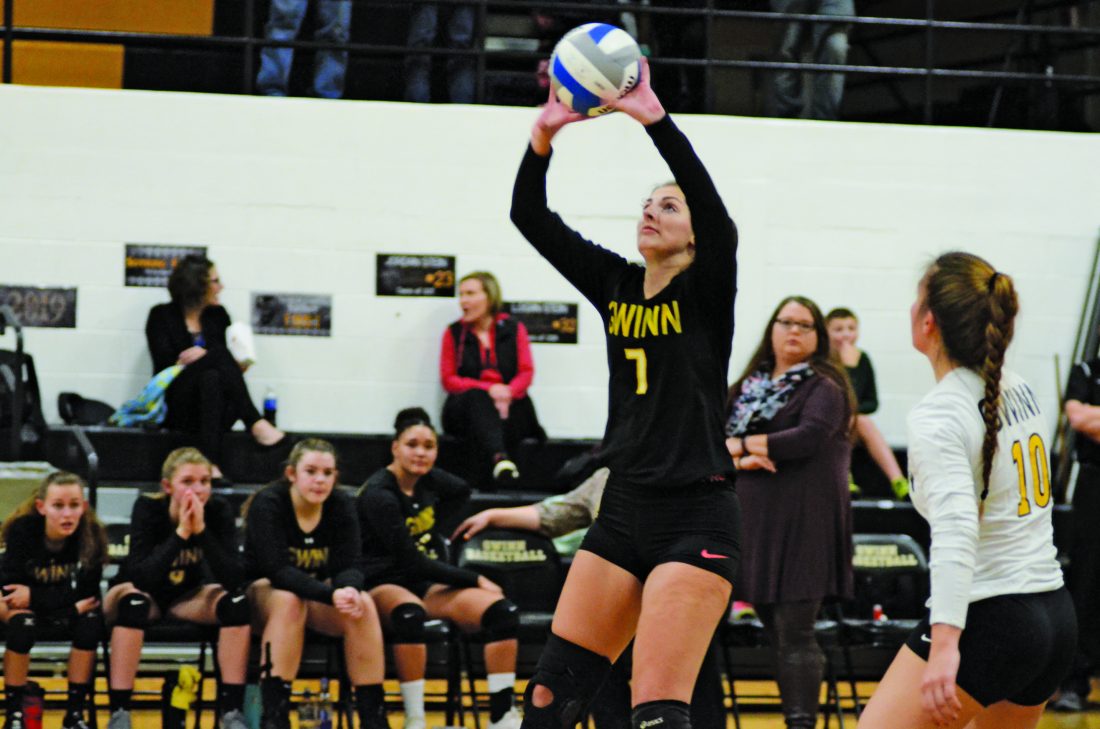 Emily Curtice took charge of the Modeltowners’ offense with 11 kills and two aces, while Megan Ruokolainen and Marissa Delmont were strong defensively with 19 digs apiece.

That allowed Gwinn to pick up a four-set win on Senior Night. The Modeltowners took the first two sets before falling into a small slump in the third, clinching the match in the fourth on a four-hit violation. Set scores were 25-21, 25-16, 20-25, 25-17.

After winning those first two sets, Iron Mountain appeared to come to life, bringing an energy to the floor that hadn’t been present for them.

The Modeltowners fell behind by as many as 11 points in the frame, and cut the lead to four before Mountaineers sophomore Annslee Runsat ended it on a kill.

Asked what changed from the first two sets to the third, Gwinn head coach Toni Roberts said it came down to rotation changes.

“We started in a different rotation so all of our seniors played the first two games,” she said. “It went smoothly, so the third game we were going to go back to our starting rotation and push through the finish, and we just couldn’t do it. I don’t know if our starters who sat at first just weren’t ready or what happened, but we just kind of fell apart.

“A win is a win and that’s all that matters right now. It would have been nice to not so much do it in three, but do it a lot cleaner than we did. We let a couple of balls go, missed too many serves and gave (Iron Mountain) some easy points that we don’t usually give up.”

A bright side for Roberts’ team was her crop of seniors, with all six of them receiving a good amount of playing time ahead of the Division 3 district tournament in two weeks.

“All of our seniors got a lot of playing time,” she said. “They all did great and it was the perfect way to have a Senior Night. It would have been better in three, but it was still a great night for the seniors.”

Samantha Beisner, Analise Hoevker and Emily Mannor are the three other seniors who join Curtice, Ruokolainen and Delmont on the court. Beisner tallied a three-kill, four-dig night, while Hoevker finished with two kills, one ace and 12 digs and Mannor four kills and two digs.

Iron Mountain head coach Jeanne Newberry said she did some mixing and matching with her rotations as well, trying to figure out what works and what doesn’t with districts nearing.

“It’s somewhat emotional for the Gwinn seniors but also a little bit for our seniors,” she said. “It’s kind of a reminder that, boy, we only have a couple of games left, in fact we’re down to just one before we enter districts.

“I threw out two different rotations (tonight), and the first rotation was my quicker rotation.

“We had just seen (Gwinn) in the West PAC tournament, and knowing they were a little bit stronger at the net, I threw out three setters in hopes we were able to get to the 10-foot line to pick up those short dumps they have a tendency of doing.

“Overall, I thought the girls played extremely well. Their communication in the second and third sets really made a difference. I kind of went back to my old rotation in the third set and they also took us into the fourth.

“It’s a reminder to never get comfortable in your positions. When you’re playing a team like Gwinn, you have to be able to move around and kind of flow with the ball.

“They’ve got a jumper that can go right over the line and right over our blockers, and when I saw that from them on Saturday, we were trying to put a defense out there to correct that (tonight).

“Our team is still in the process of working hard for districts and we’ve just got to take it one match at a time.”

The Modeltowners cruised in Set 1, pulling ahead 20-12 with the set ending on a kill from Delmont.

Gwinn quickly jumped out in Set 2, gaining a 5-0 lead and forcing the Mountaineers into an immediate timeout. The Modeltowners again went up 20-12, and claimed four of the final five points ending on a kill by Ruokolainen.

After winning Set 3, Iron Mountain continued to keep the pressure on in the fourth. While Gwinn took the first three points, Iron Mountain fired back with the next five to go up 5-3, two coming on blocks from seniors Reagan Lundholm and Anna Rittenhouse.

The teams battled to an 11-11 deadlock before a Modeltowners’ five-point run made it 16-11 and forced an IM timeout.

Iron Mountain couldn’t overcome that run and the Modeltowners pulled away.

Both teams wrap up the regular season on Tuesday. Gwinn will be at Ishpeming, while Iron Mountain is at home versus Westwood.