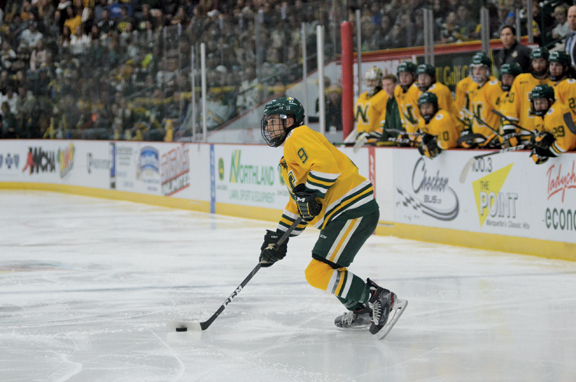 Northern Michigan University’s Darien Craighead skates with the puck in the Wildcats’ game against Michigan State on Saturday night at the Berry Events Center. (Journal photo by Amy Grigas)

“Every shutout is a team shutout and I think (Saturday night was) a pretty good example of that.” — John Hawthorne, NMU freshman goalie, on not allowing a goal in his first collegiate start

On Saturday, there was no “usually” about it as the Wildcats held the Spartans to just 15 shots and goalie John Hawthorne picked up a shutout in his first career start as NMU stonewalled MSU 2-0.

“I thought our ‘D’ corps played very well (Friday) and I thought again, they played very well (Saturday),” Potulny said. “They’re turning and getting back to pucks with speed. Instead of just putting pucks around the yellow and passing their problems on, they do a nice job of getting pucks in the middle of the rink.

“When you can come out of your own end, and you don’t have to defend in the end zone, you limit their opportunities quite a bit. I thought we did a good job there. I thought we spent more time in their end and that, obviously, limits their shots too.”

When asked about his goalie’s performance, Potulny was pleased with how Hawthorne stayed sharp despite not getting many shots.

“He didn’t face a lot of shots, but sometimes, that can be challenging too,” Potulny said. “To stay in the game when you’re not feeling the puck. I thought he looked very confident.

“Sometimes, there are stretches in a game where you don’t see a puck and somebody gets an opportunity and they (the goalie) looks a little surprised by it. I didn’t feel like John felt like that at all. I thought he was confident, and when a goalie is playing that way, it gives your team confidence too.”

Not surprisingly, Hawthorne was all smiles in the press conference as he looked sharp from start to finish and didn’t look fazed by the pressure of his first start.

“I think I was seeing the puck OK and feeling it pretty good,” he said. “But the guys, they gave up 15 shots, and they did a really good job of clearing rebounds and keeping things to the outside for the most part. Every shutout is a team shutout and I think tonight is a pretty good example of that.”

He also said he didn’t think much about the fact that he wasn’t seeing many shots and just focused on getting the next save.

“As a goaltender, your mentality has to just be to stop the next one,” he said. “Regardless of, at that point, if you’ve seen 20, or five or three. Whatever it is. You just focus on the next one. That’s all you can control.”

It wasn’t just Hawthorne and the defense that shined for the Wildcats. Their jerseys were sharp as well as NMU debuted its gold third jersey, which was Potulny’s decision.

“I always loved wearing the third jersey (at Minnesota) and what a great opportunity at home on a Saturday night against a big rival to bring them out,” he said. “I don’t know how often we’ll wear them, but I thought tonight was a great opportunity.”

Unlike the previous night, the Wildcats had a strong first period at both ends. The NMU defense held the Spartans to just three shots and none were great scoring chances. On offense, NMU pressured MSU goalie Drew DeRidder early with five good shots in the first six minutes.

The best one came with less than 14 minutes left as Grant Loven threw a weak shot on net that DeRidder couldn’t handle. The rebound went out to Vincent De Mey, but DeRidder recovered to deflect De Mey’s shot out.

NMU cashed in, though, on its second quality scoring chance. With the Wildcats on the power play, Phil Beaulieu passed the puck over to Ty Readman, who then fed it to Griffin Loughran in the slot. Loughran then tipped it past DeRidder to put Northern up 1-0 at 12:34.

The Wildcats did get another power play late in the period after the Spartans’ Jagger Joshua was called for elbowing, but about 20 seconds into it, Jarrett Lee was whistled for tripping. The teams skated four-on-four for the rest of the period and MSU started off the second with a power play.

Northern easily killed off that penalty, and two minutes later it almost went up by two goals as the Wildcats had three chances down low in front of DeRidder, though none went in.

Four minutes after that, NMU had a similar situation. This time, it came after killing a penalty on Beaulieu, but DeRidder continued to keep the ‘Cats off the board in the period.

Hawthorne wasn’t really tested by the Spartans until the latter half of the period as the freshman stopped a clear shot from the point with under five minutes left. It took until less than four minutes remaining for MSU to get its first real scoring opportunity as Brody Stevens got a pass in the slot on an offensive rush, but his shot went high over the crossbar and the Spartans remained scoreless going into the third.

MSU wasn’t able to do much in the third, either, with most of the offense continuing to be done at the other end of the rink in front of DeRidder, who stood on his head trying to keep the Spartans in the game.

He made two good stops on De Mey and Joseph Nardi as the game wound down. However, DeRidder’s luck didn’t hold out as he got completely fooled on a De Mey shot with two minutes left. The sophomore fired what looked like a knuckle puck on net from the blue line, and DeRidder misjudged it. The puck then floated over his glove and into the net for insurance to put the Wildcats up 2-0.