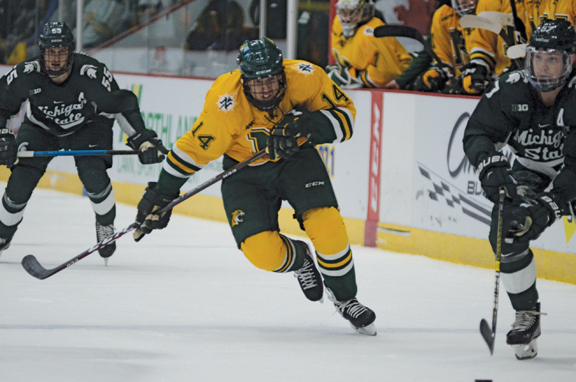 Northern Michigan University’s Vincent de Mey, center, scrambles to catch up to the puck possessed by Michigan State’s Jerad Rosburg, right, during their game on Oct. 12 at the Berry Events Center in Marquette. (Journal photo by Amy Grigas)

“From the moment camp started, he’s been incredibly inclusive and he’s done an amazing job with our freshmen.” — Grant Potulny, NMU head hockey coach, on captain Phil Beaulieu, attributing his skills to helping

Northern Michigan University’s Vincent de Mey, center, scrambles to catch up to the puck possessed by Michigan State’s Jerad Rosburg, right, during their game on Oct. 12 at the Berry Events Center in Marquette. (Journal photo by Amy Grigas)

MARQUETTE — For the second straight time last weekend, the Northern Michigan University hockey team put on an impressive show, and now the Wildcats are starting to turn heads nationally.

And rightly so. After picking up a home split with Michigan State, NMU traveled east to face then-No. 20 Boston University and had two interesting evenings in Massachusetts.

Trailing 4-1 on Friday, the Wildcats put together a furious rally in the third period to emerge with a 4-4 tie, and the following night, NMU came out with a 4-3 win on the strength of two goals by Vincent de Mey. For the second straight week, de Mey earned WCHA Forward of the Week honors. 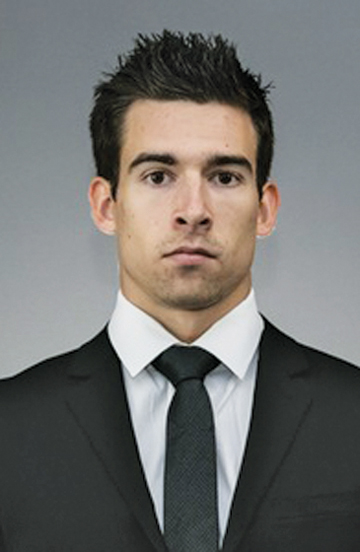 As eye-catching as that series against the Terriers was, the Wildcats now have to refocus and prepare for a new breed of canine, the Ferris State Bulldogs.

Like Northern, Ferris topped the U.S. National Team Development Program Under-18 team in an exhibition game and has already picked up two wins, a home win over Colgate and the other during a split with Miami.

The Bulldogs’ strength lies with their No. 1 goalie, Roni Salmenkangas, and a solid penalty killing unit that has stopped 13 of 14 power plays.

After making the Frozen Four in 2012 along with the NCAA Tournament in 2014 and 2016, Ferris has been down as a program, but that doesn’t mean Northern is going to overlook them.

“Obviously, they’ve had success so far,” NMU head coach Grant Potulny said of the early season. “I think watching the video that they’ve adjusted a little bit in how they play, which is different to what historically they’ve done.

“But I think the biggest indicator of why they’re having success is their goaltender. We actually watched him in recruiting and felt that he was a good goalie, and then Ferris jumped on him and took him.

“Last year, they had to remove their starting goalie from the team and Salmenkangas had to play maybe before he was ready to play. I think that experience, this year has given him confidence. He looks like a different goalie.

“It’s a team that historically, if you fall behind against them, they do a nice job of strangling the game and making it challenging for you. They’ve always been good on the penalty kill.

“As much as last week, we had to prepare for the ‘air’ attack, this week it might be more of the ‘ground’ attack that we have to get ready for.”

An air attack is a good way to describe BU as the Terriers scored four unanswered goals Friday to take what appeared to be a secure three-goal lead into the third period. However, NMU came back to tie it and then scored two goals in the third Saturday to earn that victory.

When asked what was the key to that comeback, Potulny gave credit to captain Phil Beaulieu and the guys believing in themselves and each other that they could rally against a good team.

“I think you can attribute it back to, and it’s going to be kind of a funny, long answer, but teams that have the ability to do that are teams that believe in each other and trust each other,” he said. “I think you can attribute that right to Phil. From the moment camp started, he’s been incredibly inclusive and he’s done an amazing job with our freshmen. He’s done an amazing job with some of the older guys.

“And coaches try to do it, and we do all the things we can, but what’s really done behind closed doors, or away from the rink, has allowed our team to be in a situation where you have the opportunity to come back because your mindset is right.

“Probably the technical aspect of it was, let’s just get one and see what happens. Then we got two in a hurry and all of a sudden, it’s a real game.

“(Goaltender) John (Hawthorne) obviously helped us get to that point with his stellar play. When we got to two (goals down), I was just hoping to get within one, so we could pull the goalie. That was kind of my hope.

“As the period is going, you’re running through scenarios in your head out there like who are you going to have out there and what you’re gonna try to do.

“Then you don’t have to get to that. Probably a lot of that goes back on the guys for having the belief. You can say ‘Hey let’s go,’ but saying it and really believing it are two completely different animals.”

Potulny also said the reason for the turnaround and the strong play on Saturday night in Boston was teamwork and the continued mindset that they can make a comeback if needed.

“I think we knew we could play better,” he said. “All the stats that said we were great on Saturday, we weren’t on Friday.

“We talked about it and hockey is a team game. It’s not a stickhandling, skill clinic. I felt like we really played as a team on Saturday and it was like one line after the next of the same methodical hockey.

“We played very well on Saturday, and I think a lot of that was the belief, one, that we can come back and play against anybody, but two, that we played as a team.”