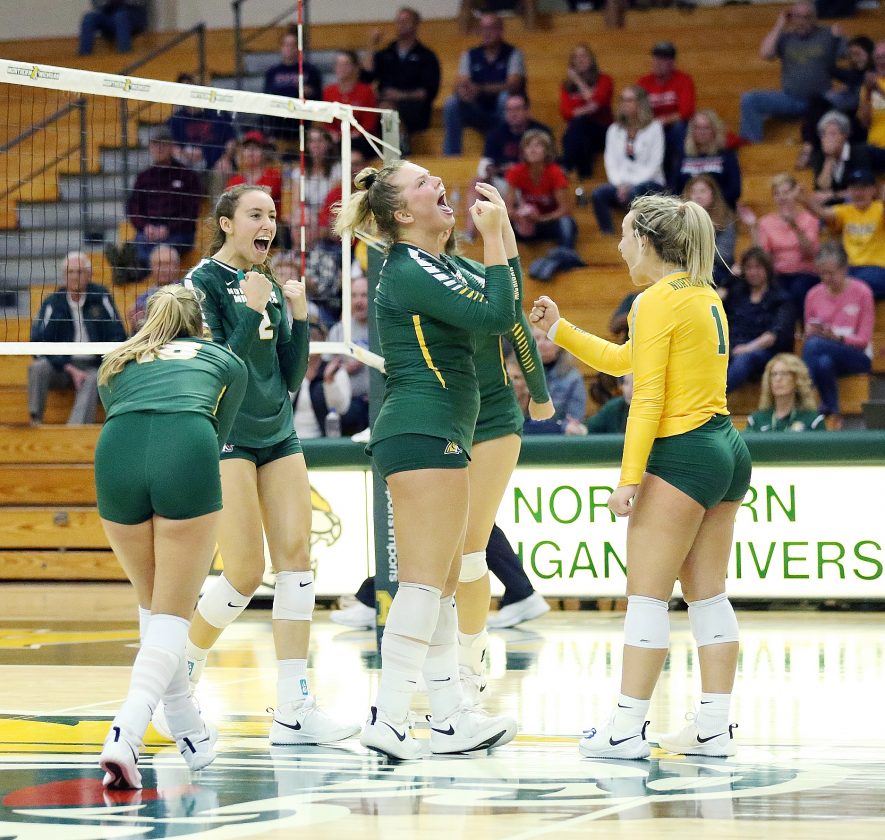 MARQUETTE — The Northern Michigan University volleyball team lost four- and five-set GLIAC North Division matches at Vandament Arena over the weekend to fall to 5-8 overall and 2-3 in the conference.

LSSU prevailed in the opening set, winning three of the final four points following a 22-22 tie. In the second, NMU led 12-8 before the Lakers tied it 16-16 and closed it out with a run. In the third set that NMU won, the score was tied 22-22 before Van Remortel assisted a Stark kill, Stark served an ace and Durecki and sophomore Hailey Wickstrom made a block to end it.

On Saturday, the match wasn’t decided until the Cardinals scored back-to-back points in the fifth set when it was tied 16-16.

SVSU led that back-and-forth set 10-6 before Durecki and Stark each had kills and Durecki a block to go with two Cardinals attack errors to put Northern ahead 11-10. After retying it, SVSU suffered another attack error to put NMU back up 12-11 as the teams continued to exchange points before Saginaw’s final flurry.

The Wildcats led for most of the second and third sets to take a 2-1 sets lead in the match before SVSU won the fourth set to force a race-to-15 to decide the match.

NMU’s balanced attack was led by Stark with 14 kills as Wickstrom, Durecki and senior Sarah Kuehn each had 12. Wickstrom and Durecki also had just two errors apiece.

Van Remortel had 43 assists and an ace, while Yacko led the way with 19 digs as Stark had 16 and freshman Madeline Crowley 14.

The Wildcats hit the road this weekend with matches at No. 16 Ferris State on Friday evening and at Northwood on Saturday afternoon.

They return home the following weekend, beginning with a match against Ashland at 4:30 p.m. on Friday, Oct. 11.