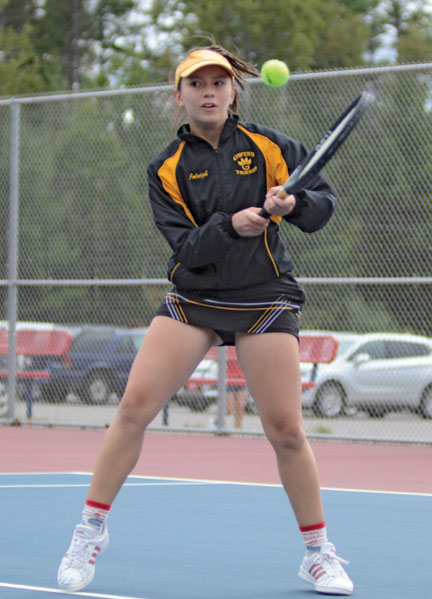 ISHPEMING — You probably could’ve predicted who was going to be in Thursday’s Mid-Peninsula Conference tennis finals.

Gwinn, Iron Mountain and Ishpeming challenged, but Westwood and Negaunee achieved conference supremacy again, with the Patriots and Miners turning the finals matches held at Westwood High School into their own dual meet.

Westwood claimed the crown between the teams, sweeping the singles flights and splitting doubles to earn a 6-2 win over Negaunee.

In the actual team scores at the meet, the Patriots also prevailed with 44 points, followed by Negaunee with 36, Iron Mountain 23, Gwinn 17 and Ishpeming 8.

Westwood head coach Sarah Massie called it a special victory for her team as the rivalry with Negaunee has been a competitive one over the last few years.

“It’s very special, especially for the seniors,” she said. “All three previous years of their high school careers, Negaunee has beaten them in M-PCs, so it was really special for them to get this victory.”

Massie was particularly impressed with her singles players, who all won in two sets.

“All four of our singles played awesome matches,” she said. “Our flights have been very competitive throughout the whole season.”

“In Jillian’s game, she hadn’t beaten (Mason) before,” Massie said. “We knew we had it in her, we just hadn’t seen it yet. What better time to see it than in the M-PC finals?

“It was the same thing for Madi the last time we played Negaunee. She lost to (Nelson) and was in her head a little bit. For her to come out (today) and play the way she did, that was something she was looking forward to ending her career on.”

“Any tournament situation, whether it be conference or (the Upper Peninsula Finals) that’s exactly what it is, it’s going to be close,” he said. “There are very few situations where it will go one way or the other. They got us 5-3 in the first dual of the season and we were able to return that the next time around.

“We figured it would probably turn into a dual meet here in the finals today, too. It came down to the final match of the day. They played well and just did a little bit more than us.”

“Our No. 4 doubles team did a really nice job,” Saari said. “They put together a very nice day and we’re looking forward to seeing how they do next week (at U.P. Finals) too.”

In other doubles flights, Westwood’s Meghan Johnson and Ellie Miller earned a win at No. 2 over Shaylee Menhennick and Tianna Williams in three sets, 6-3, 5-7, 6-3. At No. 3, the duo of Avery Mariuzza and Emily Nelson also picked up a win for the Patriots, defeating Shayla Williams and Madi Austin in another three-setter, 4-6, 6-2, 6-3.

Iron Mountain earned several third-place finishes, while Gwinn also had a podium finish with the team of Karlee Walker and Emily Curtice defeating Iron Mountain’s Megan Garvaglia and Aziza Burgoon for third place at No. 2 doubles.

With the U.P. Finals looming for teams next week, both Massie and Saari are doing what they can to prepare their teams. Negaunee will be in Division 1 with the balance of M-PC teams in Division 2.

“We have some new teams compared to (today),” Massie said. “Negaunee won’t be there, so we won’t have the same finals as (today). But we add Munising, West Iron County and Ironwood, so I’m sure things will be tossed up a little bit more.”

“We look at it the same way,” Saari said. “Nothing is going to change. For us, our goal is to continue to get better each and every day.

“If there’s anything that can be taken out of this, we can kind of refocus ourselves here. We have six days to kind of improve on some things in both singles and doubles.

“Hopefully we come out with some energy on Wednesday and play as we need to play.”

Westwood has one more dual meet, hosting Marquette on Monday, before joining Ishpeming and Gwinn at the Division 2 Finals in Iron Mountain on Wednesday.

Negaunee will be in the Division 1 Finals, also taking place Wednesday with the lead host being Negaunee.