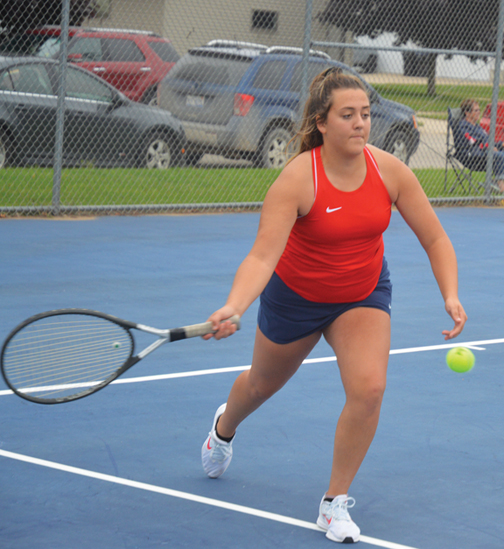 Westwood’s Karlie Patron prepares for a return during the No. 1 doubles match at a meet held Monday at Gladstone. (Escanaba Daily Press photo by Austin Hemmingson)

GLADSTONE — The Gladstone girls tennis team was the second Delta County team to feel like it ran up against a buzzsaw against Westwood on Monday, dropping a home match to the Patriots 7-1. Westwood blanked Escanaba 8-0 earlier in the day.

Gladstone’s lone win came at No. 1 singles, where Andie Balenger outlasted Westwood’s Madi Koski 7-5, 6-2 in a matchup of two of the best players in the Upper Peninsula. Balenger fell behind 3-2 before storming back to win the first set and then took control in the second with hard hitting and excellent shot placement.

“I felt I played really good,” Balenger said. “I like playing against tougher opponents because I have to play at my top level. The second set definitely went smoother than the first. She hit hard and she knew where to place the ball.”

“Tougher competition is always nice because that’s the type of competition I’m going to be facing at the GNCs (Great Northern Conference meet), so it’s nice to see that at the end of the season more,” she said.

Facing her second match of the day, Koski was also happy to get that type of experience before the conference and U.P. matches.

“We usually do some (back-to-back matches) at the start of the season, and that’s how it works in U.P.’s and M-PC’s (Mid-Peninsula Conference), but typically I don’t play against anyone as good as her,” Koski said. “It was really long … our points were really long too.

“It was just a matter of who could get the best angles. There’s not many other girls that play like that, so I practice hitting my spots and hitting it hard with her and then it’s much easier playing against someone who’s not as good.”

Westwood swept the rest of the singles matches and dominated the doubles, sweeping all in two sets.

“(I saw a lot of) good playing and good competition. They got a lot of tennis in today, as you normally do during the season, but it was just good to see them fight through some close matches,” she said. “It’s nice to see them fight through even when they’re playing against teams they don’t usually play a lot or have a big history with. It’s good for them to go out there and fight, and when the day’s over, they’re better because of it.”

She also felt it will be a big boost ahead of the M-PC and U.P. meets.

“I think it’s great getting those two matches in during the same day because at both M-PC’s and U.P.’s, they could be playing three matches in the same day,” she said. “Having two matches against solid opponents helps the girls mentally and physically, but it’s also nice that it’s a slow stress day in the sense that neither of these teams are going to be at M-PC’s and U.P.’s. It’s good for them to have that competition and not be worried about their seed or that kind of stuff.”