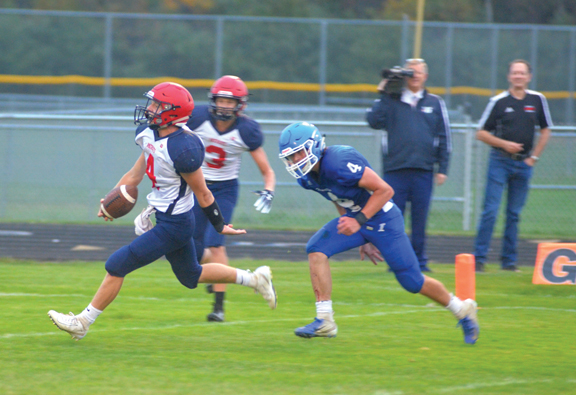 From left, Westwood back Taylor Dellangelo sprints past teammate Mason Mariuzza and by the outstretched form of Ishpeming defender John Corkin to the end zone for a touchdown during their high school football game played Friday at the Ishpeming Playgrounds. (Journal photo by Trinity Carey)

MARQUETTE — One area team was added and two fell out from last week with today’s release of the second weekly Upper Peninsula high school football poll as voted on by select members of the U.P. Sportswriters and Sportscasters Association.

Joining what are now five area schools receiving votes is Westwood, which went to Ishpeming and shut out the Hematites 38-0 on Friday. The Patriots improved to 2-2 and received two voting points to be the first team that missed out on the Large Schools’ top five.

Also among Large Schools, Marquette (2-2) moved up two spots from a tie for fifth to third alone after a 17-14 win at previous No. 1 Escanaba. The game took two days to play after a power outage suspended the game at halftime on Friday night with the Redmen leading 10-7.

Negaunee (2-2) fell from the “others” category despite a narrow two-point win at Manistique.

Escanaba tumbled to fourth after its loss, with Calumet and Menominee each moving up a spot to first and second, respectively.

In the Eight-Player rankings, last week’s lone representative from the area, Newberry, dropped from No. 5 to completely out of the rankings following a 58-14 loss at Forest Park, which remained tied for third.

In fact, the top four spots stayed the same in Eight-Player — North Central a unanimous No. 1, Pickford second and Forest Park and Brimley tied for third. Engadine took the Indians’ spot in fifth.

Two area schools continued to hold a spot in Small Schools rankings, but each in new places. Ishpeming’s blanking sent the Hematites (3-1) tumbling from a tie for first down to No. 4, while L’Anse (3-1) went from being the lone “other” up to fifth after downing Munising 42-17.

Last week’s co-No. 1, Iron Mountain, took over as a unanimous top pick this week, with West Iron County and Lake Linden-Hubbell each moving up a spot to second and third, respectively.

Seven U.P. schools, but only one from the area, made the Associated Press state rankings today.

Unlike most weeks, this week the AP didn’t list other top vote-getters that failed to crack its top 10.

Area games this week include, on Friday, Ishpeming at Negaunee, Manistique at Westwood, Marquette at Petoskey, Gwinn at Houghton, Lake Linden-Hubbell at L’Anse, Munising at Hancock and Rapid River at Newberry.