Patriots rack up yards, points on Emeralds for 52-19 win 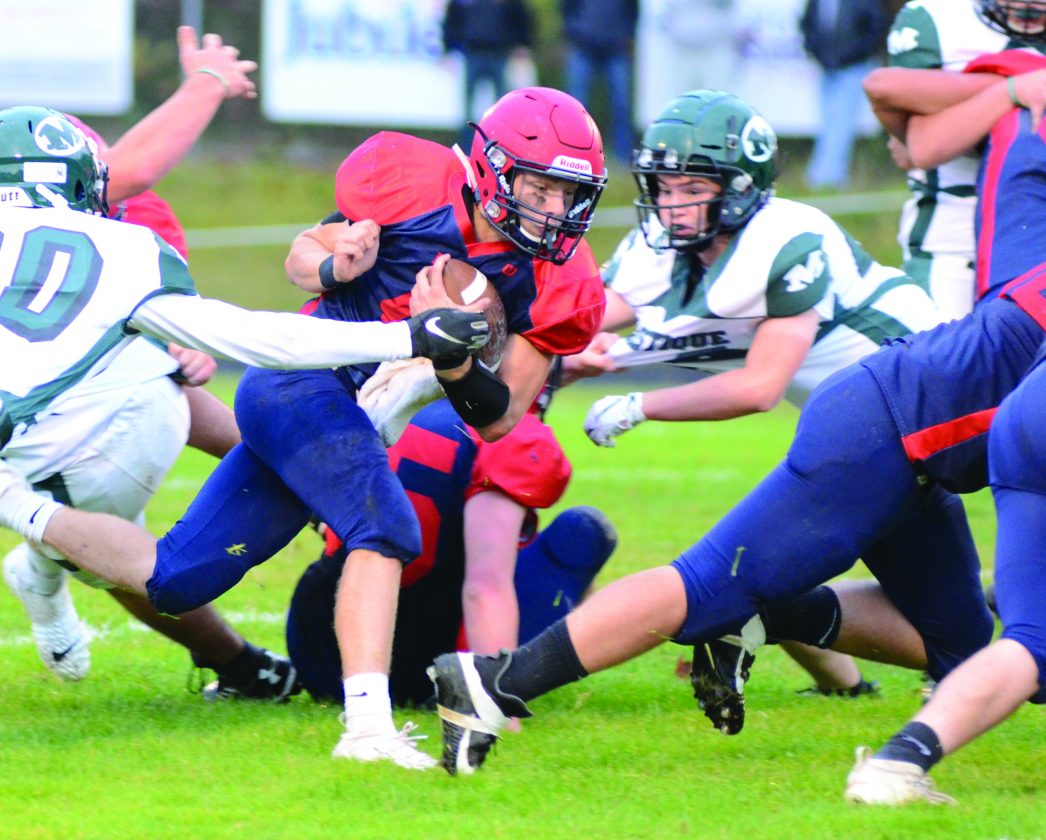 Westwood’s Taylor Dellangelo in action during the game against Manistique Friday night Sept. 27, 2019 at Westwood. (Journal photo by Amy Grigas)

ISHPEMING — It was an explosive Homecoming for the Westwood football team.

The Patriots had four players find the end zone while racking up 514 yards of total offense, topping Manistique 52-19 on Friday night.

Of those yards, 332 came on the ground, with senior quarterback Taylor Dellangelo rushing for 120 yards on 14 carries. Dellangelo also threw four TD passes and was 5 of 6 with 182 yards in the air.

Senior leadership was prominent throughout, as Mason Mariuzza, Erik Anderson and Chad Pohlman had two TDs apiece for the Patriots, while Dylan Bebee added a fourth-quarter score.

Westwood achieved its highest point total of the season, pleasing head coach Scott Syrjala, who said his team is getting into a groove.

“We’re starting to find who we are a little bit and what really works for us,” he said. “We kind of took advantage a bit of what they were giving us. I was proud of our kids’ adaptability.

“I was joking with the guys, I said ‘Man, you’ll give me gray hairs, because we’ll do it right.’ We’ll adapt on a play, I’ll call the same play, and they’ll want to do something different when the defense hasn’t done anything different. Just keep it. If it works, don’t try to fix it.

“I was proud of our kids. I was proud of Mason Mariuzza, Dylan Bebee had a touchdown, and defensively, (junior) Garrett Mann and our defensive line played really well.”

Mann has been a bright spot on both the defensive and offensive side of the ball over the course of the season.

“One of the things offensively that has helped us is bringing Garrett into the backfield a little bit as a blocker,” Syrjala said. “We’ll take what we can get too, because Garrett is a good runner. We haven’t gone to him quite as much as maybe we should, but there’s reasons for that.

The Patriots improved to 3-2 on the season, while the opposition dropped to 1-4, despite a “balanced” attack from senior quarterback Schyler Andersen, who rushed for 142 yards on 20 carries and went 4 of 8 through the air for another 142 yards.

“We knew coming in that Westwood was going to be dynamic,” he said. “They were going to pose some problems that we haven’t faced all year, and they did. We gave up more big plays today than we did in the first four games. Hats off to them. It’s a little different offense than we’re used to seeing and it takes a while to get used to it. It’s hard to prepare for it in practice.”

The Patriots scored on its first drive of the game, a lengthy one that lasted over 8 1/2 minutes and 15 plays, finding the end zone on a 4th-and-goal from the 4-yard line on a pass from Dellangelo to Mariuzza to make it 6-0, which stood as the score at the end of the first quarter.

The turning point of the game came early in the second, when the Patriots notched two TDs just nine seconds apart.

After Pohlman took a 47-yard screen pass from Dellangelo to the house on the second play of the frame, the ensuing kickoff was muffed by freshman Ross Pugh. Mann recovered the kick to setup the Patriots again, and on their first play from scrimmage, Dellangelo found Mariuzza wide open over the middle for a 38-yard score, making it 22-0 with 11:14 remaining in the half.

Three plays into Manistique’s next drive, Andersen got his legs going for a 65-yard run to the end zone to put the Emeralds on the board.

There were two more TDs in the quarter for a total of five, one a 10-yard run from Westwood’s Anderson and the other a 1-yard run from Manistique’s Andersen. The score was 30-13 at halftime.

First downs were 20-9 in favor of the Patriots. Anderson finished with 117 yards on 17 carries to complement Dellangelo. Pohlman had three receptions for 140 yards while Mariuzza had two for 42.

As a team, the Emeralds had 122 net yards rushing, with Andersen outgaining his entire team by 20 yards. Manistique senior defensive back Tony Williams also had an interception off of Dellangelo late in the second quarter.

Westwood visits Hancock (4-1) while Manistique hosts Munising (0-5) with both games on Friday at 7 p.m.