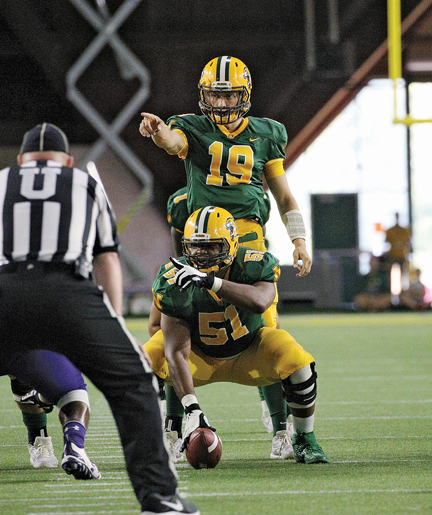 MARQUETTE — Homecoming is a time for celebration, a week where Northern Michigan University students and alums gather on campus to take part in festivities and fun activities.

However, the Wildcats football team won’t be celebrating this week as it tries to refocus after losing last weekend at Texas-Permian Basin.

NMU had moments where it looked sharp, and at one point, took the lead in the second half against the Falcons. But the Wildcats couldn’t hang on as they lost 40-24.

This week, Northern (1-1) opens GLIAC play against Davenport, which has come a long way as a program.

The Panthers were 1-10 in 2017, then finished 6-5 last year, including a 31-30 overtime win at their home field over the Wildcats. NMU held a two-touchdown advantage in that game going into the fourth quarter, but DU rallied to tie it.

In the first overtime, the ‘Cats had a chance to send it to a second OT, but instead elected to try to get the win immediately by going for a two-point conversion following a touchdown, but missed.

DU has played just one game this fall, but comes to the Superior Dome at 1-0 after a good defensive performance in a 13-9 win at Lake Erie, holding the Storm to just 30 yards on the ground.

“They’re a very good football team and I think they were sort of the story of the GLIAC last year. I really do,” he said. “I think they won one game their first year when (DU head coach) Sparky (McEwen) got there, and they had a nice winning season last year.

“Sparky and those guys have done a nice job and they’ve got a lot of good players. They’re playing really good defense. A.J., his son, is the DC (defensive coordinator) and they do a nice job with the defense there. And they ratchet it up pretty good.

“They’ve got their quarterback (Deondre Ford) back, a nice young man out of Waco (Texas) Midway, where I’ve had some experience with when I was at TCU.

“(Ford is) a good player. He had a wrist break on him last year, but now he’s back and he’s running the show on offense for them.

“Good wideouts, they’ve got (Nate) Couturier from Allendale and he’s their main gun. He’s a real good player. I recruited him a little bit out of high school when I was at Central (Michigan) and he broke the punt returns on us last year.”

Couturier had an 85-yard punt return for a TD in the fourth quarter of last year’s game to go with a 25-yard TD pass reception in OT. He also had a 39-yard punt return late in regulation that set up the TD that forced the extra period.

“We’ve got to tackle better, and really one of the main problems of our game last week with Permian Basin was penalties. We got penalties like we were getting paid to get penalties. We had 13 penalties and that’s unacceptable.

“A lot of those penalties, the majority of them, were line-of-scrimmage penalties and we can’t have that.

Looking a little closer at last week’s game, Nystrom felt there were a lot of areas that needed to be better and that he plans on changing things up against DU.

“It was disappointing,” he said. “The real general sense of it. I thought the offense was above average. We were deficient there when we got down there first-and-goal and couldn’t get the ball in (during the fourth quarter).

“Then the defense, I thought, did not play well. We missed tackles. We lost our game poise here and there and it was just a lot of management with them to get them back and have some poise for the game.

“So for the defense, we’ll make some adjustments as far as operations during the game, in terms of how we do things. I’m going to have to limit how much scheme and package things we do because it’s not fair for some of the people that we have out there if they can’t handle that. I’ve got to protect them from that. That’s probably me just trying to do too much scheme with them.”

Kickoff is set for 1 p.m. Saturday in the Superior Dome.