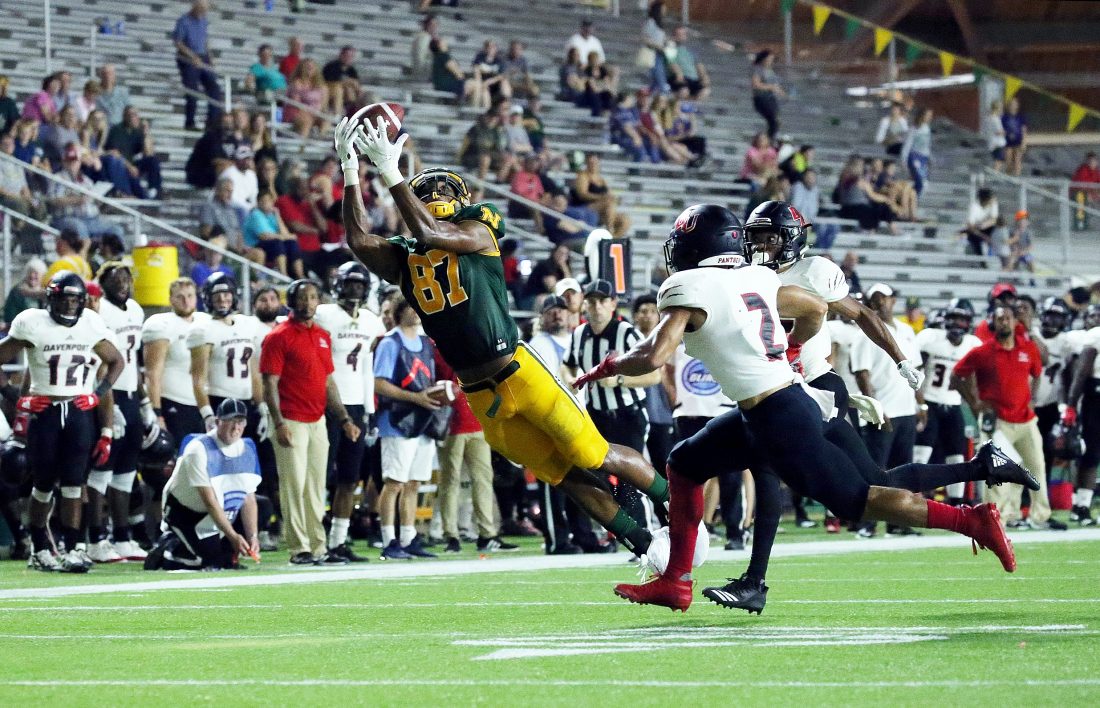 The Wildcats found that out the hard way, with the Panthers keeping NMU off the scoreboard until the final minutes, winning 21-7 and spoiling Homecoming weekend at the Superior Dome.

The contest served as the GLIAC opener for both teams. Davenport moved to 2-0 overall while NMU dropped to 1-2.

Northern’s lone touchdown came with 1:21 remaining in the fourth quarter when freshman running back Tyshon King broke the goal line for a 1-yard score to avoid the shutout.

The Wildcats had 206 yards of total offense, 489 yards less than their first two games combined. Just 52 of those yards came on the ground, while sophomore quarterback Ryan Johnson completed only nine out of 25 passes for 154 yards.

NMU head coach Kyle Nystrom called it a disappointing loss in front of a home crowd of 3,611.

“My opening thought is that I’m disappointed,” he said. “I love Homecoming here, and I’m just disappointed that we can’t give everybody a win for this game. It was very important to us to do that.

“There was a lot of energy, I feel like there were a lot of people here, we just wanted to win really bad for Homecoming and all of the people who are back, and we didn’t get that done.”

The NMU defense also came to play. After giving up a three-yard touchdown run to DU senior running back Michael Catching on the opening drive, set up by a 61-yard pass from junior quarterback Deondre Ford to senior receiver Nate Couturier, the teams went head to head defensively until halftime. Catching’s TD was the only scoring play of the first half, making it a 7-0 Panthers lead after 30 minutes.

“They jumped out 7-0 on the first drive,” Nystrom said. “I probably should’ve gotten a little bit of a softer coverage than we did, but they hurt the coverage on that, threw to the right guy and made a good play.

“I didn’t play that coverage anymore, we got into it and it was just a really good football game. It was a defensive game. I think people probably get bored with it, because it’s just really good defense.”

NMU received to begin the second half, but the 12-play drive stalled out and ended with a 44-yard field goal attempt from sophomore kicker Daniel Riser that sailed wide left.

Davenport used its next drive after the miss to go 73 yards on 19 plays, burning up eight minutes and 56 seconds of clock before finding the end zone with four seconds remaining in the third on a 1-yard rush from senior receiver Keion Powers, who took a direct snap and plowed his way across the goal line for a 14-0 Panthers lead.

DU’s final touchdown came with 10:19 remaining in the fourth with Catching breaking free for a 53-yard score and his second of the game.

“We were getting the ball back to start the second half, so I felt good about it,” Nystrom said. “Then it just kind of stayed the same, and we gave up one more touchdown (in the third).

“The last touchdown we gave up, I was running out of time, got desperate and tried to hit a blitz. They ran a nice little gap scheme, (Catching) got loose in their gap and it split us in there.

“We were down 14-0, there wasn’t much time left in the game, it was a 2nd-and-8 and we wanted to get them into a lost down so we could get the ball back. That was probably a call I’d like to have back, but that’s just football. It’s hard when you get into that position. You’re just trying to reach because you’re running out of time, it’s a two score deficit and you’ve got to make something happen.”

At the end of the day, Nystrom admitted it was a game of production, or lack thereof. Davenport produced, and his team didn’t. The Wildcats struggled to move the ball offensively, going just 2 of 15 in third down situations.

“Production, being able to sustain drives and get points, that’s what it all comes down to,” he said. “It’s all related to production. You’ve got to score points in today’s football world. You don’t win games 3-0 anymore.

“The offense struggled moving the ball, throwing the ball to the right spot, we struggled catching the ball and our execution wasn’t crisp enough at times. On defense, we had opportunities to get some takeaways and we bobbled them away. We needed to have those. Davenport is a really good football team, they have an excellent defense and that showed (today).

“When you’re playing somebody that good, everything that happens in the game, you’ve got to take advantage of. If you don’t, it’s probably going to get you. We’ll look at the film, we’ll make corrections and we’ll move forward and get ready to go play Ferris.”

Davenport finished the day with 335 yards of total offense, with Ford going 17 of 30 through the air for 184 yards. Catching led the ground game with 99 yards on 16 carries, while Couturier led Panthers receivers with two receptions for 63 yards.

Despite the Wildcats only having 52 yards rushing, King finished the day with 63 net yards to lead the NMU ground attack. Junior receiver Ravon Johnson had four receptions totaling 102 yards for the Wildcats.

NMU visits No. 2-ranked Ferris State next Saturday with kickoff slated for 3 p.m. The Bulldogs are currently 2-0, pending their Saturday night tilt at Ashland.