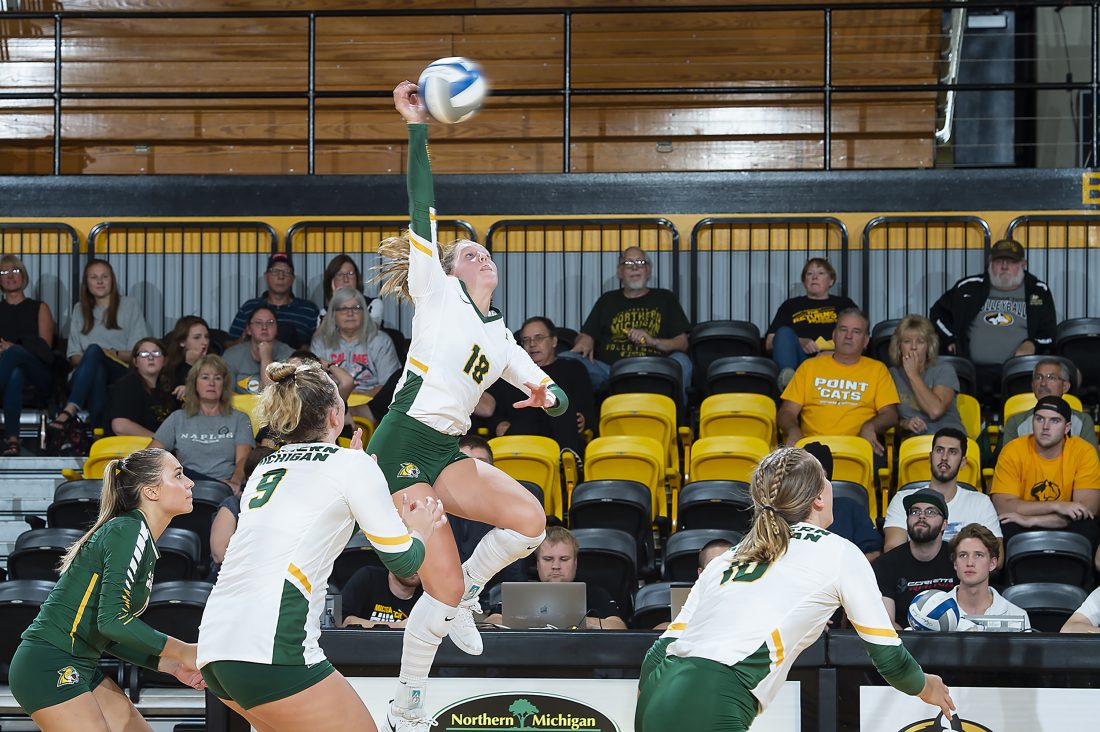 It was not easy, as the final two sets’ scores suggest.

The Huskies (8-3, 3-0 GLIAC) had to battle back from deficits in all three sets, but none of the comebacks were as big as the one that followed a crucial time out with the Huskies trailing 24-22 in the second. Jennings could not even remember what he told his troops during the break, but whatever it was, it worked as the Huskies quickly evened things at 24-24 before winning the set a few volleys later.

‚To be honest, I don’t remember what I said, but I do know it was just get back to passing,‚ said Jennings. “I think I’m constantly saying, at least this match, it was defense that’s going to win the game or that’s going to extend the lead, (and) sideout volleyball that’s going to maintain that lead.

“Anytime we have a lead, we wanted to just keep on siding out and anytime you need to get back into a game, or you need to make a stop late, it’s about defense.”

Jennings was quick to address the efforts of his All-Conference setter, junior Laura De Marchi, who made a key play to keep the Huskies’ hopes alive.

“Laura came up with a one on one block there and that ended that second set,” he said. “I didn’t say anything about that, that was all her. That was just, ‘hey let’s get nasty on defense.’ She did in that moment for sure.”

De Marchi had a strong night for the Huskies, racking up two kills, one block and 37 assists on the night. For the third-year starter, a lot of the credit goes to her teammates, as she has many options to choose from and four of them, junior outside Olivia Ghormley (13), junior outside Anna Jonynas (9), junior outside Macauley Petersen (7) and senior middle Emilia Widen (7) all had at least seven kills on the night as De Marchi was able to spread the ball around throughout the match.

“It’s amazing,” said De Marchi. “It’s amazing. I love being able to like decide where to go every single play. I don’t have to like look at my hitters before play starts and be like, ‘Oh my God, I cannot set that person.’ (Instead, I am saying) ‘Who am I going to set between an All- American and another hitter who is balling out.”

“(It is) whatever I’m feeling at the moment. I know it’s gonna be my right choice.”

For Peterson, who missed almost all of 2018, getting back to being a consistent threat is something she is working on. Her teammates are noticing the efforts.

“She’s a great person out there, full of energy and it’s nice to like see her enjoy the game and be able to have fun playing the game that she wasn’t able to like play last year,” said De Marchi.

On the other side of the court, Wildcats coach Mike Lozier knew playing Michigan Tech on their home court early in the season, while his team is still working out the kinks, was going to be a tall task coming in.

“I’m disappointed we lost,” he said. “I mean, at this point, there’s no moral victories for any team. You’ve got to go out there and you’ve got to execute. So not winning is not a good feeling. I’m not super fired up about that.

“The only thing was that is that we knew, going to season, that Tech was going to be a quality opponent. We had the opportunity in the second set to win it and we let it slip away.”

After the tough loss in the second set, the Wildcats (5-6 overall, 2-1 GLIAC) came out well enough to get an early lead again, 5-3, but that was as big as the advantage got before the Huskies stormed back and took control of the set from there.

“In the third set, we came out slow and showed some urgency coming back,” Lozier said. “But, at the end of the day, it’s a loss on the record book, so we’ve got to get better.”

One player that stood out for the young Wildcats squad was Lizzy Stark. The sophomore outside had a match-high 15 kills on the night, including seven in the second set.

It just was not enough to match up with a deep Huskies squad that has only dropped one set during their four-match streak.

The Huskies return to action on Friday when they host Saginaw Valley State at 7 p.m. at the Wood Gym. They will also be in action Saturday as they host Lake Superior State at 4 p.m.