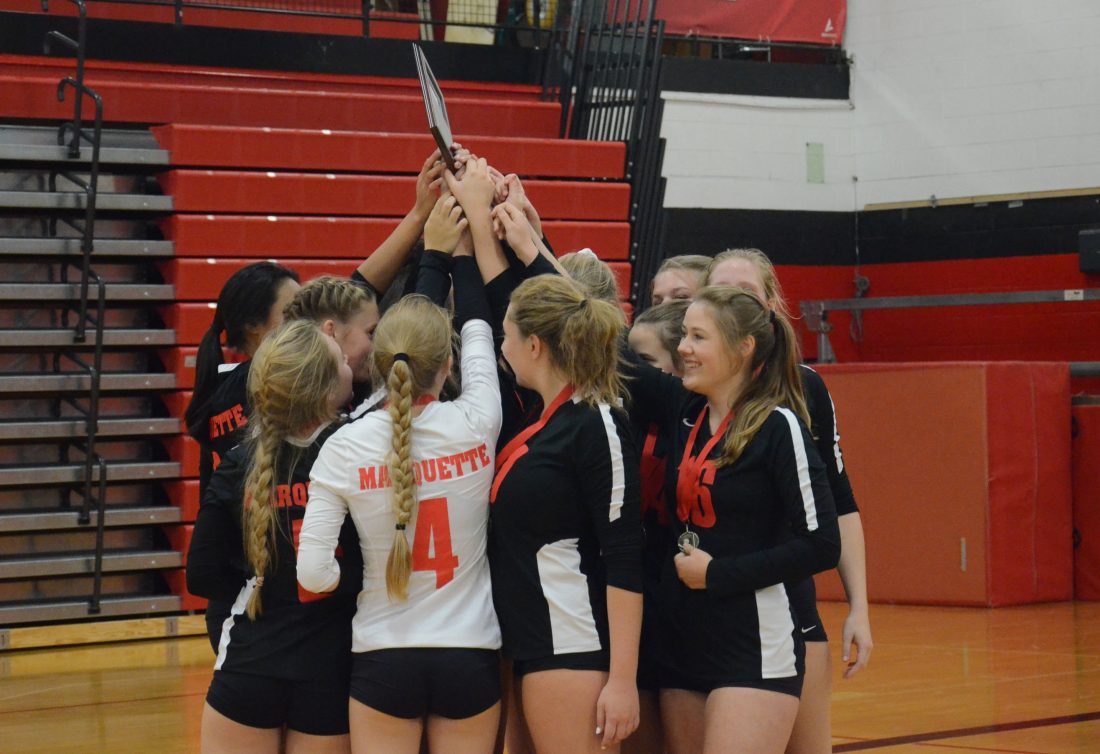 The Redettes varsity prevailed in a familiar championship match, defeating Gwinn in two sets in the best-of-three format for at least a third year in a row.

Redettes head coach Ann Crandell-Williams said Saturday’s tourney matches were some of the most consistent her team has played this season.

“As a coach I was extremely happy,” she said. “It’s starting to come together more and more. I think … we were consistently doing all of the important things.

“We had a phenomenal serving day, we achieved like a 90 percent serving rate and that’s always what we’re going for. Offensively we were great, and defensively the digs were really spread out.

“Statistically, chemistry, attitude, all of that was just excellent. I’m very happy.”

Gwinn head coach Toni Roberts was also pleased with her team’s play, especially as tournaments have given the Modeltowners some trouble.

“I actually consider our team not a very good tournament team, but (today) was much better for us,” she said. “We were able to start playing right from the beginning of the day.

“We had a little bit of a lull right before the bracket round, but we still played good enough to be seeded first in our bracket.

“It was a successful day. It’s hard to come and play Marquette. They’re absolutely exceptional, they have awesome hitters and they’re a great all-around team.”

Teams were split into the Red Pool, which included Marquette, Florence, Westwood, Superior Central and Ishpeming, and the White Pool of Gwinn, Stephenson, Negaunee, the Marquette JV and Menominee.

Each team played four matches in a round-robin format, playing two sets with the score starting at 4-4 and a cap of 27. The top two teams from each pool advanced to the bracket round, set up with traditional volleyball rules, except a best-of-three format instead of best-of-five.

Marquette and Florence were 1-2 in the Red Pool while Gwinn and Menominee claimed the top of the White Pool.

Gwinn prevailed in two sets over Florence, 25-22, 25-19, after falling into a hole early in both sets and staging comebacks.

“We were still coming out of a lull from losing to Stephenson in our last pool play game,” Roberts said. “I think we were trying to find some energy and trying to power through. These tournaments are long days; they just get a little worn at the end. That started to show, but they were able to finish the games out and take it two sets which was great.”

The Redettes took Set 1 of the title match after jumping out to an 18-4 lead. The set ended on a service ace from senior outside hitter-middle blocker Aspen Michelin.

The Modeltowners notched the first point of Set 2 on another ace from senior setter Marissa Delmont, but after gaining a 2-1 edge, the Redettes took 10 of the next 11 points to go up 11-3. That sequence included two more aces from Michelin and two kills from sophomore outside hitter Seiler Hruska.

Gwinn was unable to climb back into it, with match point coming on a kill by Michelin.

Coming up next for both Marquette and Gwinn are matches against Gladstone, with the Redettes visiting the Braves today and the Modeltowners hosting Gladstone Thursday.

Crandell-Williams said mid-season tournaments are fun and a good experience.

“A tournament day is always fun, and it’s always a little bit different than a dual match in terms of consistency, endurance and watching how teams handle different types of competition,” she said. “Also just both the physical and mental strain of the day. Tournaments are a bit different, but Marquette is a tournament team.”