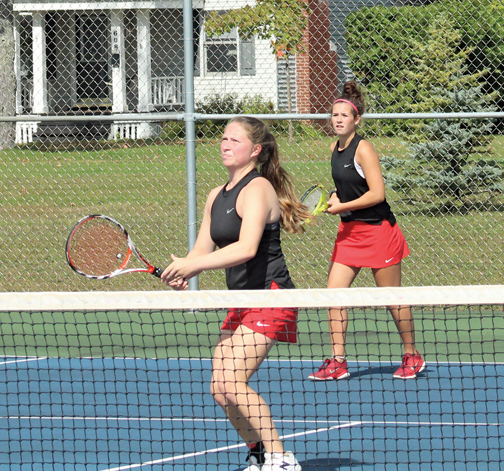 KINGSFORD — Marquette swept through the Great Northern Conference high school girls tennis meet like the strong wind did at times on Wednesday at the Kingsford High School tennis facility.

The Redettes won the team titles by a wide margin of 10 points, scoring 24.

“As a team, I thought we played pretty well today,” Marquette head coach Derek Sandstrom said. “But we have plenty of room for improvement over the next week, and hopefully we can do that before (Upper Peninsula Division 1) finals.”

Marquette won three flights Wednesday — Elysa Olivier at No. 1 singles, defeating Andie Balenger of Gladstone in the championship match 6-1, 6-1; Campbell Kallio at No. 3 singles after she downed Kate Matthews of Gladstone 6-2, 6-0 for the title; and Zoey Brian and Ruth Hummell at No. 3 doubles with a finals win over Aurora Dahl and Madison Berutti of West Iron County.

Including those two runner-up finishes, the Braves were runners-up with 14 points, just a point ahead of third-place WIC’s 13. Another point back was Menominee with 12, while Escanaba was fifth with 10, the host Flivvers with seven and Munising coming in seventh.

Kingsford’s Lizzy Cross won at No. 4 singles with a victory in the championship over Marquette’s Haddie Katzenberger 6-3, 6-4. WIC’s Eden Golliher and Tori Bociek won No. 1 doubles with a 6-0, 6-2 finals triumph over Marquette’s Kennedy Tate and Ryleigh Jackson, while the Wykons’ Emily Nelson and Anna Malmquist took out Gladstone’s Emma Delaire and Emily Marenger 6-0, 6-2 for the No. 2 doubles title.

These teams have several dual matches left, but all will be at either the U.P. Division 1 or Division 2 finals on Wednesday. Negaunee hosts the D-1 final while Iron Mountain and Kingsford will hold D-2.