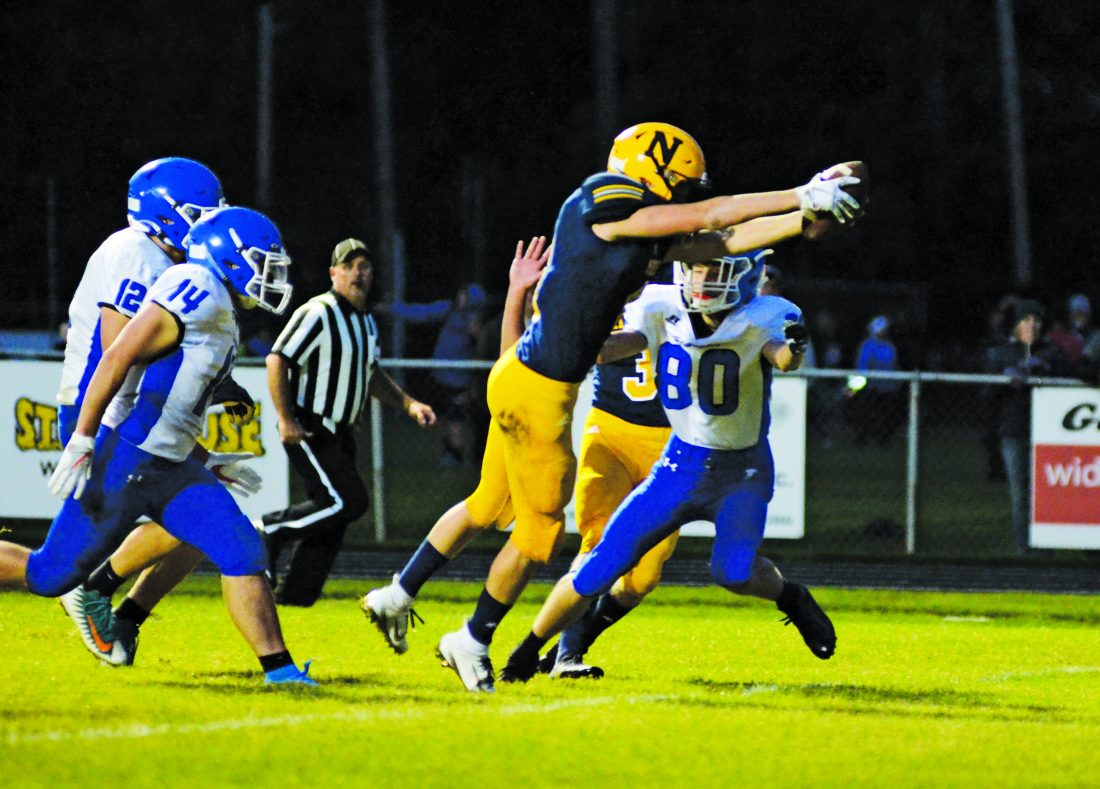 Negaunee’s Alex Munson dives into the endzone to score a touchdown during the game against Ishpeming Friday night Sept. 27, 2019 at Negaunee. (Journal photo by Amy Grigas)

NEGAUNEE — Not many high school quarterbacks could take a massive hit before halftime, then manage to play better in the second half.

But Negaunee’s Jason Waterman accomplished that Friday night against Ishpeming.

With the Miners holding a slim 14-6 lead, Waterman was crushed by Ishpeming lineman, and his friend, Jake Kugler as he was attempting a pass and ended up walking wobbly to the sideline a couple minutes later.

The hit didn’t bother him, though, as the senior threw for three touchdowns in the second half and ran for another as the Miners defeated the Hematites 40-20.

“You know what’s crazy?” Waterman said. “That’s my childhood best friend that hit me. That’s why he hit me so hard.

“He buried his facemask below my ribs and I felt literally, every little thing of air gone. I was glad I got a break for the end of the first half, but it’s Ishpeming week and I wasn’t going to sit out.”

“My guys up front, I told them before the game that if we opened them up, we were going to win and that’s exactly what happened,” he said. “It’s hard not to have 190 on the ground when the holes are that big to run through.”

Negaunee assistant coach Kevin Jacobson, who took over head coaching duties for this game from his brother Paul, praised Waterman as well as his team after it toppled their rival.

“Jason was lights out tonight,” Kevin Jacobson said. “He was a little banged up, and to come out and have the night that he had, just shows the leadership skills that he has. Everyone looks to him.

“The kid gets banged up and it doesn’t really bother him and throws for 276 yards and rushes for 191. To do that is just unbelievable.

“It was a really good effort. We’ve been banged up this year and for kids to step up that haven’t been playing much and put forth that effort was amazing.”

While the Miners celebrated, the Hematites were quiet as turnovers and mistakes plagued them all game and prevented them from mounting a rally, even with John Corkin gaining more than 200 yards on the ground.

“We put ourselves in a great position to be successful and then we have a blown coverage, or we have a penalty or we have a mistake. So we’ve got to fix those things.

“I can’t say enough about John and Otto (Swanson). They run the ball hard. The line is blocking for them. It’s just disappointing that we can’t get inside that 20 yard line and punch that ball in the end zone.”

Negaunee struck first less than a minute before the end of the first quarter as Waterman hit Erik Salminen with a 50-yard TD pass. The Miners padded their advantage to two scores with less than five minutes left in the half when Alex Munson caught a slant pass from Waterman and weaved his way for a 24-yard score.

Salminen has been kicking for the Miners for several seasons, but hasn’t been able to play with contact due to a medical condition. He got the go-ahead to play against Ishpeming and it didn’t take long for him and Waterman to develop a connection as he finished with 202 receiving yards and three TDs.

Ishpeming didn’t quit, though. Swanson returned the ensuing kickoff down to the Negaunee 21, and four plays later scored on a five-yard run to make the score 14-6 at the half.

The Miners started the third quarter hot with Waterman hitting Munson with a 8-yard touchdown pass, and after a costly Ishpeming turnover, Waterman broke free on a 57-yard run and three plays later, he ran in a 11-yard TD.

Trailing 28-6, Ishpeming needed a spark and got one when Swanson got his second score early in the fourth.