In the heart of Texas: Northern Michigan University Wildcats football team heads down to the Lone Star State on Saturday night 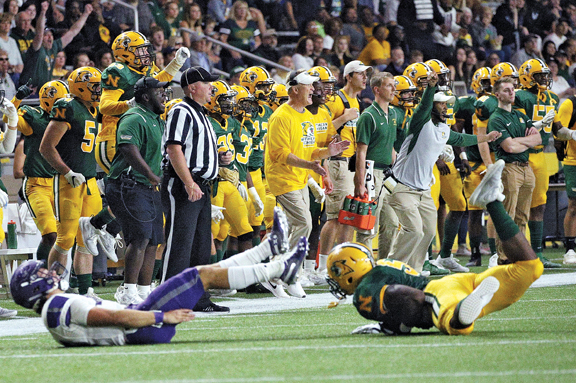 After Northern Michigan University’s John McMullen, front right, put pressure on McKendree quarterback Turner Pullen, front left, to force an interception by the Wildcats’ Jacob Ager, not pictured the NMU team erupts with emotion on the sidelines in the second quarter Saturday at the Superior Dome in Marquette. (Photo courtesy Daryl T. Jarvinen)

“When you go to Texas, I lived there for three years … them and God created football.” — Kyle Nystrom, head coach, NMU football

MARQUETTE — It’s been said that the stars at night are big and bright deep in the heart of Texas.

The Northern Michigan University football Wildcats will get to see if that’s true on Saturday night when they travel to the Lone Star State to face Texas-Permian Basin.

The Falcons made the long trip to the Upper Peninsula last season as NMU prevailed in what was a tight game.

“It was a really close game,” Wildcats head coach Kyle Nystrom said Tuesday. “We got into an end-of-the-game battle with them and the offense made a third-and-long completion to Ravon (Johnson) to get us out of the game, but it was on the fence at the end.

“When you go to Texas, I lived there for three years and I worked there when I was at TCU, them and God created football. When you live above the Mason-Dixon line, you don’t know anything about football. That’s who they are, what they are and how they live.

“And they’ll tell you. So, we better get ready because we’re going into Texas to play and as I addressed the team last night, we didn’t show up and play worth a grain of salt when we played two years ago when we played down there at Angelo.

“So, we’ve got to go and represent, not only ourselves and everything else. We have to be motivated to play and we have to play better than we did the first game. And I told the players, I said that every team makes its biggest stride between game 1 and game 2, so I expect the same thing.”

The Falcons, on other hand, may not to need to make any big strides as they won their first game last week, 60-7 over Wayland Baptist. That’s the largest win in program history as TPB racked up 508 yards in total offense.

The Falcons rotated four quarterbacks during the game due to the blowout, and just like the Wildcats, TPB seams to be using a running back-by-committee game plan. Nystrom said that the Falcons like to spread things out offensively, so that’ll be something different for the NMU defense to deal with.

The good thing for the Wildcats is that the defense was the story of the game last week as Northern defeated McKendree 30-9 in the Superior Dome. It was NMU’s first season-opening win in three years and the first opening-game victory in the Nystrom era.

The Northern defense picked off two Bearcats passes and made a crucial fourth down stop at the goal line in the first half to take the momentum back after the Wildcats fumbled on the second play from scrimmage.

Not only that, but NMU also appeared to pick up a safety later in the game, but the officials ruled that the Bearcats ball carrier just barely managed to get the ball out of the end zone.

“To be honest, it seems like a week ago already, but I was happy that we were accountable, and we executed some things real well,” Nystrom said just three days after that game. “We had high energy. I mean, we really ran well. We had some good collision, and some good impact, and some good hitting deliveries out there. So it was good to see.

“Finding out that we were strong enough, were quick enough and explosive enough where you can actually pop a good tackle and do some things like that. We haven’t been able to do that until this year. So hopefully, we can keep improving and get better at it even. We had a lot of energy so that was good.

“We were assignment-sound the first game,” NMU defensive coordinator Kirby Cannon added. “That’s always a question mark. I thought we tackled well for the first game, which is another issue sometimes. I’m very happy with the performance.”

Nystrom was also pleased with how his team won the turnover battle with those two picks, and he thinks that the big fourth down stop fits in that category.

“I count the goal line stop as a takeaway too,” he said. “We always preach for three or more, so we count that. We ended up with three. Jake’s (Ager) pick and Tavion (McCarthy) had the other pick and they came at critical points, especially Jake’s when we were down there (NMU was trailing 6-3).

“By the time Tavion’s play was over, they (the Bearcats) were pretty (far) down into our scoring zone, too. They really flipped things. They give you a lot of energy and you ride that wave.

“The other side feeds off it and we get some production out of it. That’s the best thing. It gets a little difficult when you get a big takeaway like that and you don’t get any productivity out of it. But that wasn’t the case on Saturday.

“It gives you a lot of energy in the game. It just picks it up and ratchets it up even more, so that was fun.”

Speaking of the other side of the ball, Nystrom liked how his offense looked after a slow start and felt that they had a little more jump in the second half.

“I think they were good,” he said about the offense. “It just took us a little bit to wake up and do the things that we’re supposed to do. But that happens and I don’t want to dwell on that. I don’t want to live on the negatives at all. I’d rather focus on the positives.

“Yeah, we learned something, and we should be better at that as far as waking up and being ready to execute right away and not stumble around a little bit. We get into the middle of third quarter, from that point on to the end of the game, we got rolling pretty good on offense. That’s where we want to pick up from in the second game.”

Thanks to the blowout victory, the Falcons weren’t really tested much defensively, so if the Wildcats can shake off the dust early and start hot, they could catch TPB off guard and build a sizeable lead.

Kickoff is set for 7 p.m. EDT in Midland, Texas, about 20 miles from TPB’s home base of Odessa.