Hoping to bite back 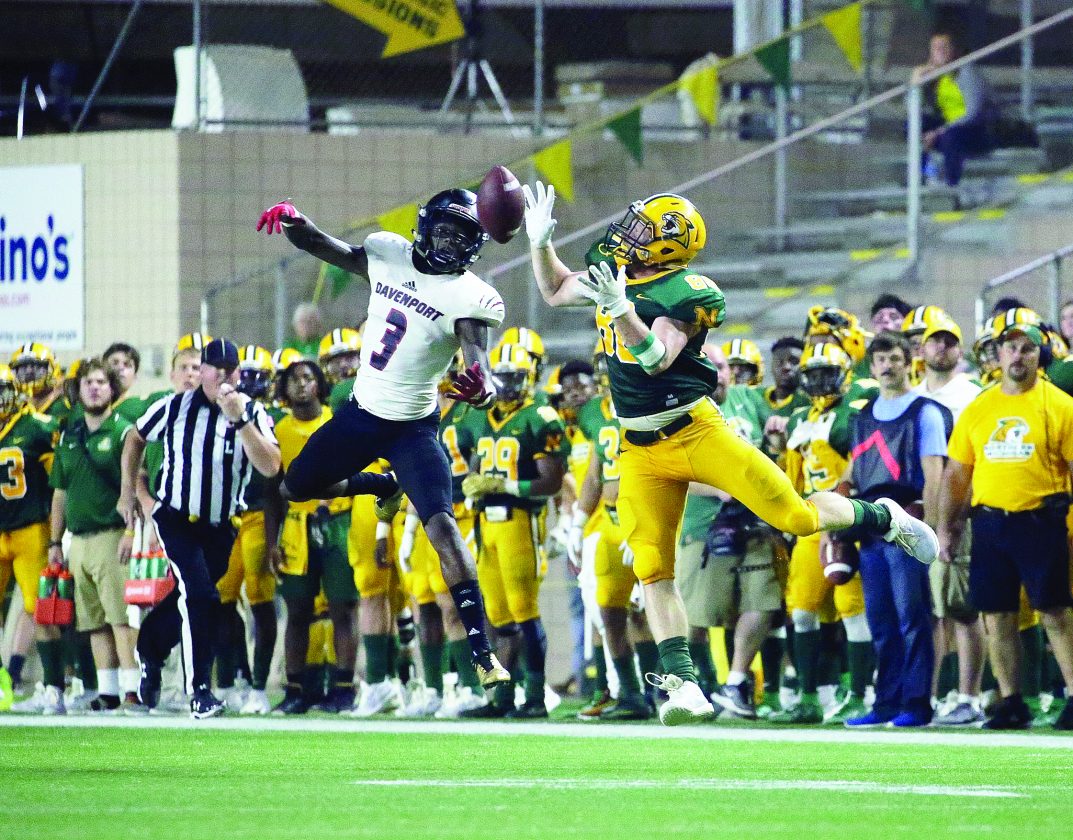 Davenport's Kendall Sawyer, left, tips a Northern Michigan University pass intended for wide receiver Ryan Knight, right, in the fourth quarter of the Wildcats' Homecoming game on Saturday, Sept. 21, 2019, at the Superior Dome in Marquette. Knight got his hands on the ball but couldn't make the catch. (Photo courtesy Daryl T. Jarvinen)

MARQUETTE — At this moment, the Northern Michigan University football team has nothing to lose.

That’s the kind of attitude NMU is taking with it while heading downstate this weekend to face No. 2 Ferris State. The Wildcats know that the odds are stacked against them against the powerful Bulldogs, so they’re heading to Big Rapids loose and are looking forward to lining up against, arguably, the best NCAA Division II team in the country.

“They’re strong everywhere. Their offensive line is better than I’ve ever seen it. Their running backs are phenomenal. Marvin (Campbell) is still back there. They got two other guys that are great when they get in.

The Hill Trophy is the Division II equivalent of the better-known Division I Heisman Trophy.

Nystrom was a defensive coordinator at Ferris through 2016, when he took the head coaching position at NMU.

“Their defense, I don’t know if they lost a starter from last year,” Nystrom said. “They’re greased up and good.

“If you go into Central Washington and put up those kind of points (Ferris won 62-28) and you go to Ashland and do what they did to Ashland (a 28-13 win), they’re like the Clemson of D-II.

The Wildcats did some things really well but didn’t in other areas on Saturday against Davenport as they were dealt a 21-7 Homecoming defeat. Nystrom liked what his defense did for the most part, but wasn’t pleased with his offense.

“We were in the game all the way until we didn’t get the onside kick,” he said. “I thought the defense played very well.

“We gave up one long ball in the first series and that was more of a coverage call, weakness thing. It wasn’t that Antonio (Howard Jr.) couldn’t run with the guy, he was just a little late on reacting to the route he was getting. He just lost a step for a little bit and it took him a little bit longer to regain that step. He can run, Howard can run. To keep the box a little bit tighter, sometimes I’ll do that…. So after that play, I went away from that coverage and played things a little more basic. And we were fine. We were really good on defense for the rest of the day.”

“The other big play that we gave up was that counter that they ran…. The kid made a real nice cut in there.

“Those two plays are the only plays I regret in calls. (Out of) the 70 plays we had and I feel good about 68 of the calls on defense. I always want perfect, but when you look at it, that’s football.

“If I got two calls I regret, I can live with that. Sometimes, the players have got to execute a call no matter what when they play for you, but I was happy with the defense. We gave up five explosive plays. Three passes and two runs for the whole game. So we’re playing good defense.

“Offense we were just a disaster most of the day. Their (the Panthers) inside, their three-technique and their nose gave us fits all day and our ends ran around us. Their secondary, they covered us and we couldn’t breathe. And then when we did have a chance to catch a ball, it would’ve had to be a big catch, but we’ve got to make those plays more often than we don’t make them.

“Punt coverage was really good, especially compared to last year against them.”

In order to pull off a massive upset of Ferris, Nystrom said everybody will have to be at their very best.

“It’s possible and I’m looking forward to it. It’s fun to go play the best. I have expectations and our players know that. I have very high expectations of them. We keep fighting and moving forward and we’ll go play.

“I look forward to it. You’ve got to play the cards you’re dealt. We’re getting better as a football team and it’ll be really good for us to play this game.

“It’s going to be homecoming at Ferris and we’ll kick off at 3 (p.m.) and there’ll be a lot of noise and there will be a lot of boos for the old green and gold, but hey, you’ve got to ride that and make it a plus.”