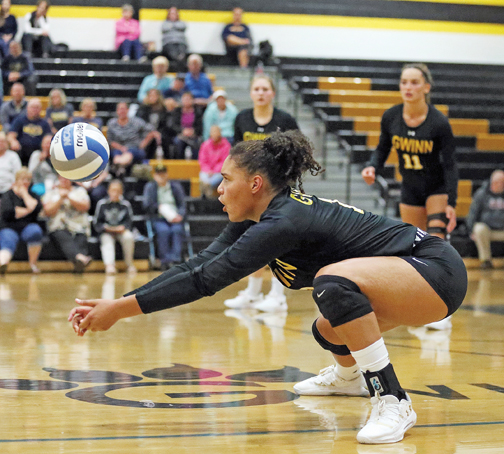 Gwinn's Tianna Taylor bumps the reception of a Negaunee serve in the second set as teammates Elliina Miilu, back left, and Emily Curtice look on during their high school volleyball match held in the Modeltowners' gym on Thursday. (Photo courtesy Daryl T. Jarvinen)

GWINN — Gwinn had to work hard but it paid off with a three-set victory over Negaunee in a high school volleyball match held at the Modeltowners’ gym on Thursday evening.

“Negaunee was ready to play and worked us hard,” Gwinn coach Toni Roberts said. “We struggled offensively putting the ball away. We were able to spread the ball well and all six of our hitters got at least one kill tonight.

“I like seeing the even numbers with all the girls working hard, and it was nice to see my middles and right sides step up when the left sides had a slower night.” 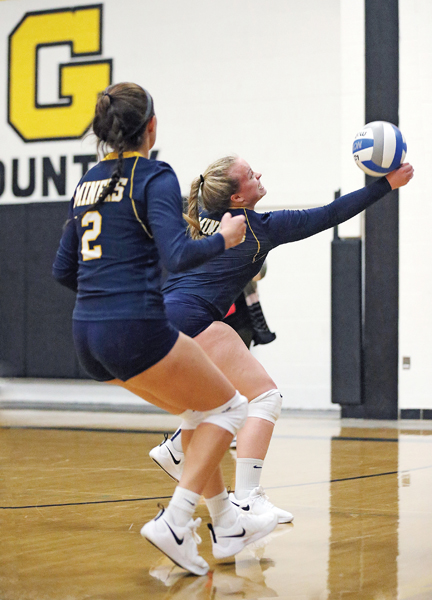 “Halle Beauchamp played a great game again for us,” Roberts said. “She is really working hard in practice and it’s now showing in her games. She slowed a lot of balls down for us tonight against Negaunee’s two outstanding middle hitters, and she had six really strong and smart kills.”

Elliina Miilu added a team-high 12 digs, three aces, a kill and a block.

“Elliina Miilu lead us in digs for the first time this season,” her coach said. “She has a lot of responsibility on our court and plays defense in two different back-row spots in the rotations we have, and she did outstanding tonight in both spots. She has a really nice platform and puts up nice balls for our setter. Elliina also helped us out a lot on the net tonight slowing down Negaunee’s middles. Last time we played Negaunee she had a great offensive night and tonight she proved herself as a defensive player.”

In addition for Gwinn, Megan Ruokolainen and Marissa Delmont each made five kills, with Ruokolainen adding four aces and eight digs, while Delmont also had 24 assists, nine digs and a block.

Both teams will participate in the Redette Rumble hosted by Marquette on Saturday morning.

At Marquette, the Redettes prevailed 25-18, 25-17, 26-24 in this Great Northern Conference match two days before they host the Redette Rumble.

“I was really happy with our overall team play tonight,” Marquette head coach Ann Crandell-Williams said. “This conference win brings us one step closer to one of our team goals and that feels great.

“It feels like things are coming together a little more all the time, and we are slowly becoming more consistent in our play.”

The Wolverines (6-1) tied the first set 8-8 and took the lead on a lifting call on SC, finishing off the set with a five-point service run by Karley Prater.

The Cougars (1-5) tied the second set three times before falling behind again.

“The whole time I thought we were in it,” SC coach Kris Bray said. “What happened was our serve receive let us down, and we made some mistakes. They got some runs.

“If we hadn’t let them get those runs, it would’ve been a two-point game at the end. We also had some service errors, and we can’t afford to make those kinds of errors.

“I think we matched up pretty well with them, but we just made too many of our own unforced errors to win. We’ve got to clean up some things, but I’ve got to give them credit. They’re a good team, they hit well and they have good athletes.

“I thought defensively, we did pretty well. We were reading their hitters well, and you could tell by the long volleys. It was a fun match, even though we lost.”

Gwinn’s Tianna Taylor bumps the reception of a Negaunee serve in the second set as teammates Elliina Miilu, back left, and Emily Curtice look on during their high school volleyball match held in the Modeltowners’ gym on Thursday. (Photo courtesy Daryl T. Jarvinen)