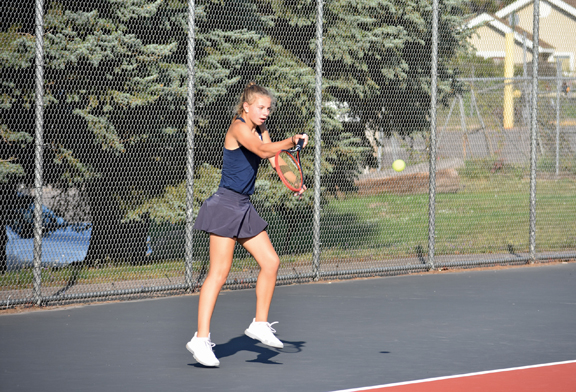 “That was a pretty inspiring effort by all the girls here (Monday).” — Kyle Saari, head coach, Negaunee girls tennis

MARQUETTE — When the pressure is on and the team is counting on you, it can be difficult to keep your emotions under control anywhere, including on the tennis court.

But Negaunee’s Annika Tervo did that Monday afternoon as she outlasted Marquette’s Haddie Ketzenberger for a three-set win at No. 4 singles and gave a 5-3 overall win to the Miners.

“Annika put together a heck of a performance at No. 4 singles and so did her opponent,” Negaunee head coach Kyle Saari said. “Annika was kind of at the breaking point in between the second and third set and it’s like ‘Do I have enough to go on?’

“After that break, she found enough to dig down and kind of take things game by game and that’s how she was able to kind of pull it out. We’re tremendously proud of that effort.”

Tervo wasn’t the only one who stepped up for Negaunee as it trailed the Redettes 3-2 at one point, but Lexi Mason rallied to defeat Campbell Kallio in three sets at No. 3 singles and the Miners took three of the doubles to emerge with the meet victory.

“That was a pretty inspiring effort by all the girls here today,” Saari said. “We had three matches to play and we were down 3-2, and to be able to get a 5-3 win, we needed to pull out all three of those.

“And all three went to three sets and all three of those flights did that. And all of them were in pretty dramatic fashion, too.

“First of all, Lexi at No. 3 singles, she dropped the first set and she was down in the second. In that match, Kallio played terrific. She had good angles and she hit good balls. We were just kind of waiting for Lexi to hit her stride and she did in the second set and showed some impressive mental toughness in the third.

“Today was a good test because it’s (against) a good team on a Monday, just coming off the weekend, warm weather. You don’t really know how some teams will respond to that situation, and I think, kind of as a whole, we started a little sluggish at some places, but that’s where mental toughness has to come in.

“The girls just kind of took things one point at a time and that’s the biggest key and the most encouraging thing when you get toward the conference and the (Upper Peninsula finals). When you’re in a tight match, you want to have some prior results to hopefully pull that out. It doesn’t mean anything for the conference or the U.P. other than some seeding, but it’s good to have that reference point when that time comes.”

The Redettes may have been dealt the tough loss, but they still had a solid day overall. Elysa Olivier (No. 1 singles) and Mollie Kilpela (No. 2) both earned two-set victories for Marquette and the Redettes tandem of Ruth Hummel and Zoey Brian won at No. 3 doubles.

“Compared to how we played up in Negaunee, I thought the girls did well,” Marquette head coach Derek Sandstrom said. “We’re climbing the hill in a couple spots. Others, we still have a way to work yet.

“But I was happy with the way we played. A lot of girls that lost the first set came back and took the second. It’d be nice to have a little left in the tank for that third set, but at least we were game for the fight.”

The season is quickly winding down, but Sandstrom thinks his squad is progressing with U.P. Finals coming up in just a couple weeks.

“I think we’re doing pretty well,” he said. “We’re heading in the right direction. We’ll see how we do. We play Escanaba for the second time (today) and I want to see some improvement in doubles there.

“We’ve got to finish our match with Menominee and then we see Munising. So we have a busy week ahead of us.”