Emerging from the shadows

Senior forward Craighead will be go-to scorer this year 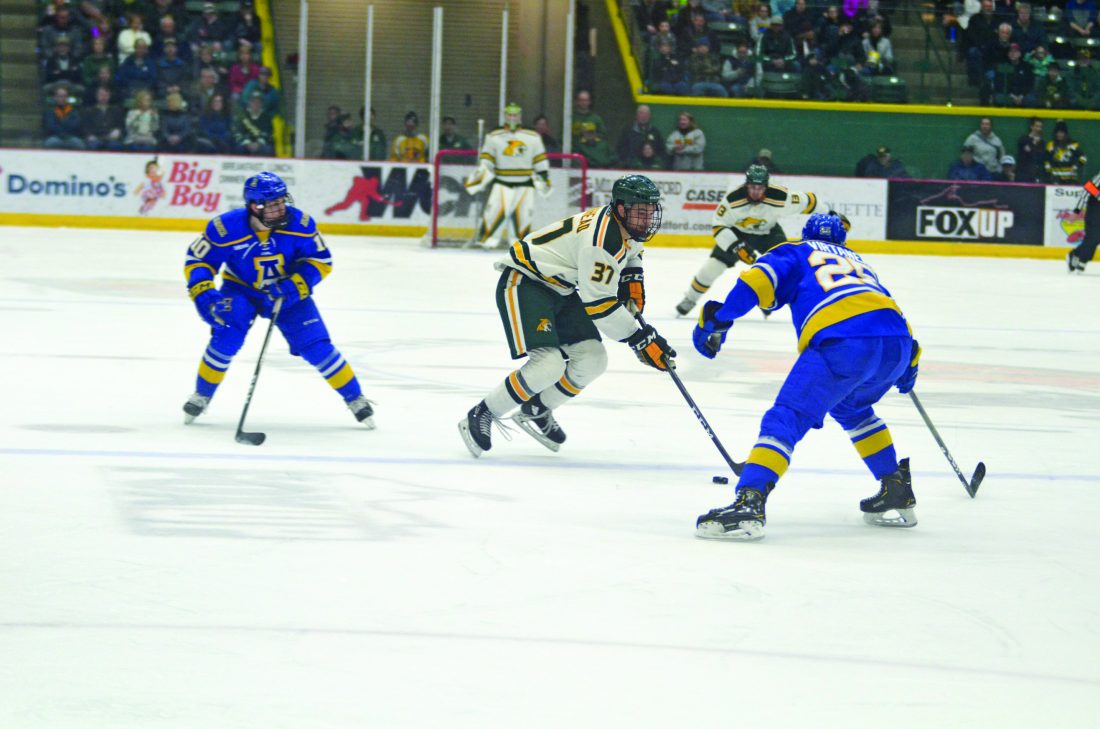 MARQUETTE — For the past couple of seasons with the Northern Michigan University hockey team, Darien Craighead has had to linger in the shadows.

Despite putting up some impressive numbers his sophomore year and leading the nation in game-winning goals, the now-senior forward stood outside of the spotlight, which was focused heavily on Hobey Baker candidate forward Robbie Payne. Last year, the light shined down on All-American winger and WCHA Player of the Year Troy Loggins, while Craighead was stuck on the second or third line.

This year is different though. Payne and Loggins are gone, as are Adam Rockwood and Denver Pierce, so Craighead will be seen as the Wildcats’ go-to offensive threat this season. Based on how he’s performed in the past though including a 20-point season last season, it appears that he’s up to the challenge.

When asked what he hopes to accomplish this year, Craighead said he wants to keep progressing as a player and although his numbers dropped some compared to two years ago, he’s not worried about that.

“Obviously, to take steps in the right direction for myself,” he said. “At the same time, and you got to see it the year before in my sophomore year, our team had a really good season and everyone’s numbers went up. Not to say that we had a bad year last year by any means, but not quite as good as the year before. You kind of saw guys’ numbers stoop a little bit. So just try to buy in and I think if the team is doing well, everybody’s personal success is going to follow.

“I think any time you’re a senior and you’ve been around the same program, a couple groups of guys look to you for advice. I’m always there for the guys and stuff like that. I like to think of myself as a leader with this group.”

NMU head coach Grant Potulny has definitely noticed those leadership qualities and he’s impressed with the extra effort Craighead has put in the offseason.

“I think in my time with Darien, I’ve never seen him as serious and as motivated as he has been this summer,” Potulny said. “He spent the whole summer here. Even to the point where like on Sunday, I was in here Sunday, and Sunday is kind of the day that athletes take off. He walked in with Luke (Voltin) and they were in the weight room doing extra (reps). Just small things, but that to me is a sign of maturity. That this summer, he’s come to the realization that, and it happens to every senior, that my time here has gone very fast. You come in as a freshman and you’re just happy to be on the team. As a sophomore, you want to start. As a junior, you want to score and as a senior, you want to win. He’s now in that I want to win category and he’s taken on a leadership role in the weight room and the training. I’m really proud of what he’s done to this point.”

It’s not just Potulny who’s noticed Craighead’s capabilities, NHL teams have as well. Craighead spent time with the New York Islanders at their development camp two years ago and earlier this summer, he was invited to the Vancouver Canucks’ camp, which was special for the British Columbia native.

“That was lots of fun,” Craighead said. “It was nice to be able to go home and skate in a camp like that. I had a couple of friends and family come out. So it was really cool to skate in front of them as well.

“We probably had, kind of a coach per player on the ice, at least when we broke into forward and D (defensemen) skates. We’d do video before the skates, so you knew exactly what you were out there trying to work on. I thought it was done really well.”

Potulny isn’t surprised professional teams are looking closely at Craighead as he’s entering his prime as a developing player.

“I think it’s a couple things,” he said. “Number one, it’s the ability he has. He’s a very talented player. The other side of that is sometimes I think people forget about age in professional hockey and Darien is a young senior, which is a little unique for our program. So he kind of falls into what the pro guys call kind of an ideal peaking time. So he’s kind of hitting that right now. I know there’s definitely an interest around him and obviously, number one, it’s because of his ability. He’s got a great body and several of those things that all translate to pro hockey. But his age also helps him in a lot of ways for that peaking time for professional players.”

Speaking of peaking, the Wildcats might be lurking under the radar this year after losing a lot of seniors and they’ll be quite young this year. However, Craighead doesn’t put any stock in that and said that he’s looking forward to making “a little magic” with fellow senior Phil Beaulieu as the two upperclassmen try to bring a championship to Northern and the Upper Peninsula.

“Age isn’t everything,” he said. “I just think it’s a group coming together and peaking at the right times and winning the right games. Just kind of all being on the same page.

“It’s the last year and the last kind of kick at the can. Once you get in the (NCAA) tournament, anything can happen. That’s pretty far away right now. I’m just looking forward to meeting all the guys and looking to having a really good start.”