Back on the road again: Northern Michigan University Wildcats men’s soccer gets to .500, heads south this weekend 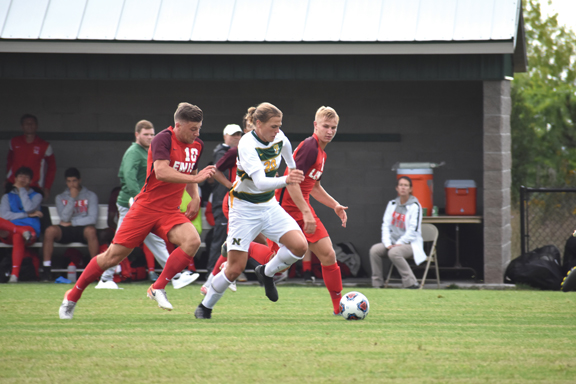 Northern Michigan University’s Ben Hoffman, center, sprints ahead of Lewis University’s Timm Adler, left, and Matt Budreck during the first half of their college men’s soccer game on Sept. 12 at the NMU Soccer Field in Marquette. (Journal photo by Ryan Stieg)

“I know that this week is going to present some real challenges.” — Dave Poggi, NMU head men’s soccer coach, on playing at Ashland and Davenport this week

After getting dealt a double-overtime defeat at home by Lewis and then a tough 1-0 loss by Lake Erie in Grand Rapids, the Wildcats evened their record at 3-3 last weekend for homecoming with an overtime win over Purdue Northwest and shutout victory over Upper Iowa.

Luca Lippert notched his first career hat trick in the game against PNW and was named GLIAC Offensive Player of the Week.

“I’m happy,” Wildcats head coach David Poggi said. “It was the first homecoming that my program has ever experienced and it was a great homecoming weekend for a lot of things at NMU.

“It doesn’t hurt when you get two (good) results. They were both exciting games. More guys got playing time than we usually expect in a conference match or opening season match. It was good.”

Now the Wildcats go back on the road to play at Ashland, Ohio, on Friday and Davenport in Grand Rapids on Sunday.

“We’ve got a lot of stuff to do. I feel happy that we made it through it, but I know that this week is going to present some real challenges.”

Poggi isn’t wrong in that assessment. Ashland may be winless at 0-5, but the Eagles are a scrappy team that somehow can find a way to get a win and they could put up a good fight against the Wildcats.

“Ashland, (head coach) Ollie (Slawson) does a great job with that team,” Poggi said. “They’re always in every match. They’re capable of winning, and last year they were the last team to make the GLIAC Tournament and they wound up going to the national tournament. So they’re a team that on any given day is capable of playing well.

“It’s a 7 p.m. evening match and I think it’s the first one in awhile, so I’m sure they’ll have that kind of security knowing they’re at home. They have a number of players who have experience and who we’ve known for a couple of years.

Davenport, on the other hand, is one of the better teams in the conference and the Panthers have turned things around with back-to-back shutout wins after starting 0-3.

“I’m happy we’re playing them now rather than later, but we get to play them later, too,” Poggi said. “I guess it’s better now to get one in before they get even better. I picked them at the beginning, just knowing what I knew, to be one of the top teams in the conference.

“They opened up by going down to Florida and they had some weather difficulties because it was around the time when we had the storms and stuff. And they got beat, but they got beat by teams that were in the national finals. That’s always a good experience. At least I think so.

“Now they’re undefeated in the conference and I’m sure they’re planning to be undefeated after the weekend. So hopefully, they’ll get a good match with (Wisconsin-)Parkside, who has been in every match now and has the same record as we do. So I think it’s a great weekend of GLIAC soccer.”