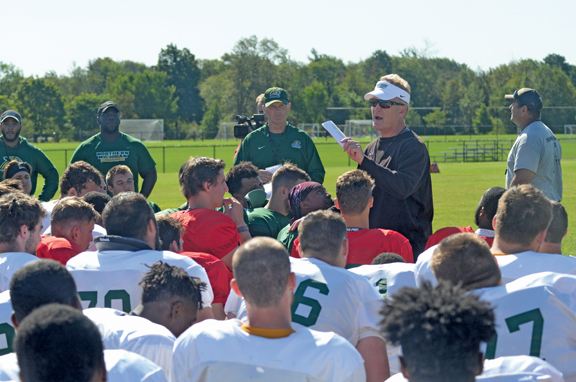 “It was a good first week…. and we’ve got to take a big step to get to that second week.” — Kyle Nystrom, head coach, NMU football

MARQUETTE — You can already smell fall sports season in the air here in the Upper Peninsula.

Both high school and collegiate seasons for several sports kick off this week, and football isn’t too far off in the distance, either.

Northern Michigan University football fans will soon spend their Saturday afternoons in the Superior Dome, with the Wildcats now in the midst of their fall camp to prepare for the 2019 season. 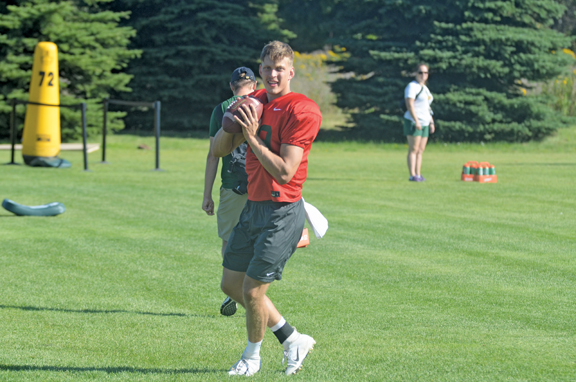 Local media were invited to the team’s outdoor practice on Monday morning, holding its annual media day to allow television, print and radio reporters a sneak peak at the upcoming campaign.

Third-year head coach Kyle Nystrom said things are ahead of schedule after one week of practice, and his players returned to campus ready to go.

“We’ve had one week so far,” he said. “The kids came back in great shape and the execution level is better for the first week than we’ve had in the last two years. We’re getting pretty far into practice as far as what we can do team-wise and everything like that.

“We had about a 65-play scrimmage on Saturday, so we’re ahead as far as what a first-week practice has typically been. It was a good first week, now we get into the second week and we’ve got to take a big step to get to that second week. The third week, we start school and then get into regular-game week for McKendree.”

The season opener at home against McKendree University is the game on everybody’s mind. Last year’s game played in Lebanon, Illinois, was won by the Bearcats 34-28. While NMU lost by just one score, it was a game that forced the Wildcats to play catch-up throughout the second half, never quite catching up as time wound down.

“They did a good job against us last year, I gave them credit,” Nystrom said. “We had a couple of touchdowns called back and then we had situations where we gave up big plays in critical times.

“All those things are going to be a factor. We’re going to have to be better than they are. It’ll be a physical game and it’ll be the first game for a lot of players on both sides. I’m looking forward to it.”

Last year’s game was also the first and last of quarterback Ryan Johnson’s second season with the Wildcats. Johnson suffered a season-ending injury early in the first quarter.

Trading the load under center for the remainder of the season was Latrell Giles, who is back this year, and Kole Stealy, who has since departed.

Johnson returns as the starter this season, again as a sophomore after taking a medical redshirt in 2018. The De Pere, Wisconsin, native was impressive in his freshman year in 2017, throwing for 1,581 yards and nine touchdowns in nine games.

“It’s great to be back,” he said. “It wasn’t a long recovery. Everybody keeps asking if I’m OK and I’ve been good for about six months now. It’s awesome to be out here competing with the 1s (first string) and a new offense. It’s exciting.”

The new offense Johnson speaks of is that of new offensive coordinator Dan Fodrocy, as well as filling the absence of the now graduated, two-time All-GLIAC running back Jake Mayon.

Asked if it took some extra time to get back into a rhythm coming off of injury and learning a new system, Johnson said he’s used to learning new systems.

“I mean there’s always going to be growing pains and stuff,” he said. “After being in high school we had an offense, and we had one before this new staff, and it gets easier every time, I think. There’s always new little slang and stuff like that you have to grow on, but it’s going really well.”

Johnson noted the Wildcats have three running backs, two of them freshmen, and junior back Deandre Caldwell, who averaged 45.7 yards per game last season and scored two TDs.

“We have three really consistent running backs,” he said. “We have the freshmen Tyshon (King) and Sebastion (Toland), and then Deandre. They’re all going to be really good if we can rotate them.”

“We’ve got a lot of speed and talent on the outside, and the inside as well,” Johnson said.

Defensively, the Wildcats return senior defensive back Troy Mayon, junior defensive back Brady Hanson and sophomore linebacker Isaac Darkangelo. That trio emerged as statistical leaders on defense in 2018, with Hanson leading the Wildcats in tackles with 82. Darkangelo led the defense with two sacks and also recorded 60 tackles, while Mayon, the brother of Jake Mayon, forced three turnovers and recorded 79 tackles in ’18.

Hanson said the defensive units have shown bright spots throughout the first week of practice, and expectations for their performance are high.

“Coming into the season, I think we’ve got a lot to expect,” he said. “We had a good scrimmage last Saturday and I think we’re going to come in and have a good season.

“Defensively, we have a lot of key attributes and key players that are going to make top plays. Overall we’ve just got to have fun. We have a good defense.”

It’s all about the little things, something Hanson said Nystrom and defensive line coach Bob Jurasin preach throughout practice.

“Fundamentally, that’s the biggest thing for us on the defensive end,” he said. “If we’re keen to our fundamentals, locking in and making sure we’re doing the little things right, that’s going to let us take care of business on the field.”

Northern was picked seventh of nine teams in this month’s GLIAC preseason coaches poll after a 3-8 campaign in 2018 that included a 1-7 conference mark. The teams voted below the Wildcats were Northwood and Michigan Tech, although both the Timberwolves and Huskies finished above the Wildcats in last season’s standings.

Preseason polls are meaningless to Nystrom, however, as they are to most coaches across collegiate athletics. That doesn’t mean he likes it, though.

“I never like being in the bottom tier of anything,” he said. “We’ll carry a chip about it, but we’ll have to play every game. We’ll have to prove that’s not where we belong. That’ll be up to the players and the coaches to win all the games that we can.

“That’s the way you go into it. I expect to win every game. We expect to win them one at a time. McKendree comes up first and we’re all focused on winning that game. When that game is done, we’ll move forward.”

The Wildcats’ season opener is at 1 p.m. on Saturday, Sept. 7, in the Superior Dome. NMU plays alternating home and away dates throughout the season, with an open Saturday on Oct. 26 as the season ends at Ashland on Nov. 16.