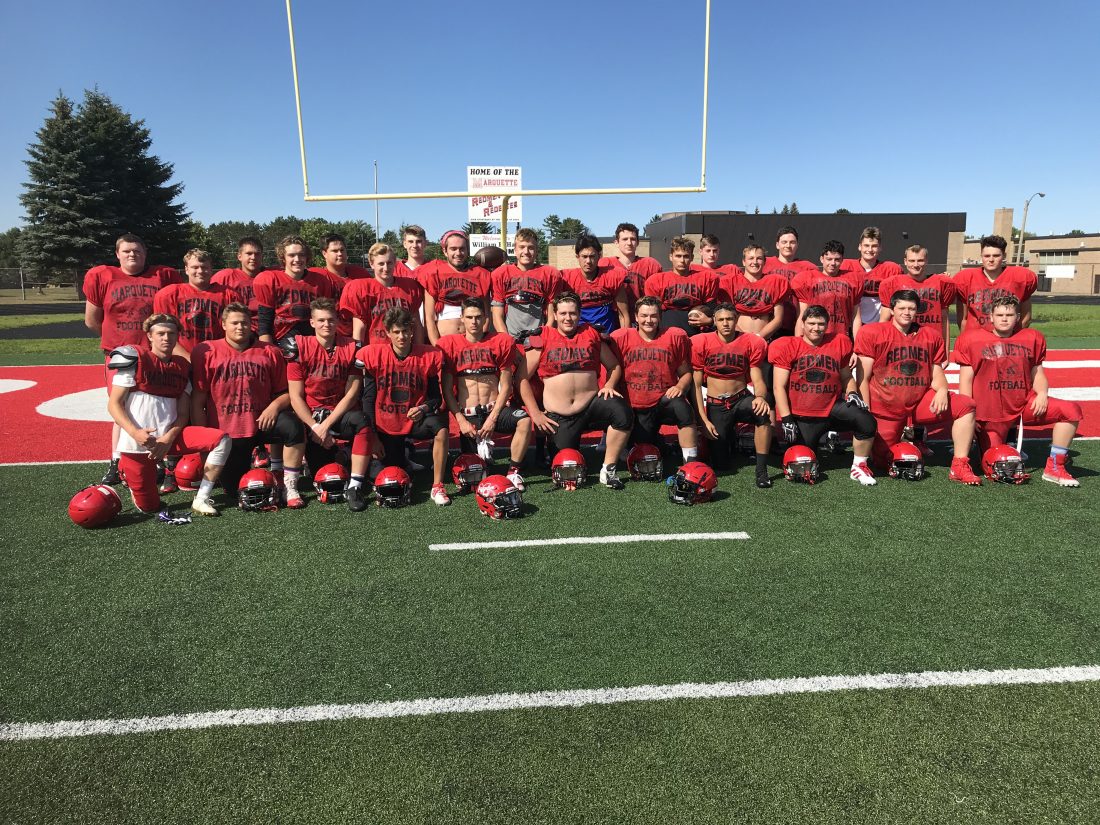 MARQUETTE — Marquette Senior High School varsity football fans are looking for something to cheer about this season and new head coach Eric Mason hopes he can help their cause.

The Redmen gave their supporters a lot of moments to cheer about during the past season — a big downfield reception from former standout receiver and now-Michigan Tech player Ethan Martysz, or a wild 36-35 overtime win against Great Northern Conference rival Escanaba, or a late goal-line stand against Kingsford to preserve a 21-20 win in the final seconds.

Mason said playoffs are an obvious goal for every team, and if he wants to get the Redmen back to the postseason for the first time since 2014, it’s getting his players to respond.

“I think that’s the goal every year,” he said. “You’d love to say that, but it’s a matter of how the kids respond to the challenges we put to them.”

Mason, who led the MSHS freshmen football team from 2010-18, takes over for Dave L’Huillier, who was at the helm of the varsity squad for nine seasons before stepping down after last season.

Mason said he’s often asked what he’s going to change from L’Huillier’s system. Rather than changing much, he wants to continue what the former coach started in bringing the football program back to a successful level.

“(Dave) has been very helpful to be honest with you,” he said. “We were friends before we were coaches, and any time I need him he’s a phone call away. He’s helped me tremendously getting things in order. It’s amazing what behind-the-scenes things you don’t know … until you have to do them.

“As far as the football is concerned, people ask me what I’m going to do different. Not a whole lot, we’re just going to try and build off of what he started. The kids are used to his way, and we’re just building off of that and making some small changes, but nothing too dramatic.”

As far as the team itself, the Redmen lost some key players from last season, especially on the offensive side of the ball.

“Ethan Martysz, obviously, we’re not looking to replace him,” Mason said. “He’s a talent. Drew Gale and Adam Jenshak, same thing. Those kids were very talented. So we don’t want to necessarily replace them by kid, but by committee we’ll do the best we can.”

“That (battle) will be figured out in the next few weeks,” he said at the end of the first week of practice.

“Those are kids that have been a part of the program and played a lot last year,” he said. “We’ll just expect them to continue to get better.”

Defensively, the Redmen will look to fill the role of GNC Lineman of the Year and GNC First Teamer Alex Cannoot.

Beau Zorza and Josh Iwanicki were also GNC First Teamers who both played defensively and on the offensive line.

While it may seem there are several big voids to fill, Mason isn’t worried. He also has the advantage of working with most of the current roster as the former ninth-grade coach.

“Every year you’re losing kids and every year your seniors are your core for the most part,” he said. “We have a great group of kids now that I had as freshmen. They only had one loss as freshmen and it was to a junior varsity team.

“There’s some very talented kids on this team.”

Marquette has faced those two squads back-to-back to start the season since 2015, and has played TC Central every year since 2013.

That totals 10 games against TC schools over the last six seasons. Marquette is 1-9 in those games, with its last win coming against Central, a 31-23 win in the 2013 season opener at William R. Hart Stadium.

Mason is well aware of challenge the TC schools have posed.

“The schedule is tough,” he said. “We’ve got both Traverse City teams the first two games. The goal right now is Week 1. It’s to be competitive with St. Francis and hopefully do the right things to get a win.

“I told the kids ‘Why not us?’ because we’ve got to beat them at some point. They’re no different than our kids. With those teams and the talent that they have, you just can’t make any mistakes. On the flip side, you’ve got to take advantage of any mistakes they make.”

Marquette opens with four of its first five games on the road. MSHS visits St. Francis on Friday night before hosting TC Central the following Friday. From there, the Redmen travel to Sault Ste. Marie, play their first GNC tilt at Escanaba, then go to Petoskey to play the Northmen for the third straight season. They finally return to Marquette for homecoming on Oct. 4 against Alpena, the only new opponent on the schedule.

“The GNC, no matter what, is tough,” Mason said. “Last year, Menominee was in a down year, and unfortunately kept us out of the playoffs. Win that game and we’re in. Menominee, Kingsford, Escanaba and Gladstone, they’re all formidable and we don’t really have any weeks off.

“We need to be at our best every week, and that’s what we need to get these kids to understand.

“We’ve got to have some luck going into it, too. Last year, injuries were a big problem. Something the coaches can’t control are kids getting hurt. Hopefully this year, we can keep the kids healthy and again, take advantage of what teams are giving us, as well as limiting our mistakes.”

Asked why fans should venture out to William R. Hart Stadium on Friday nights this season, Mason kept it simple by saying the players deserve the support.